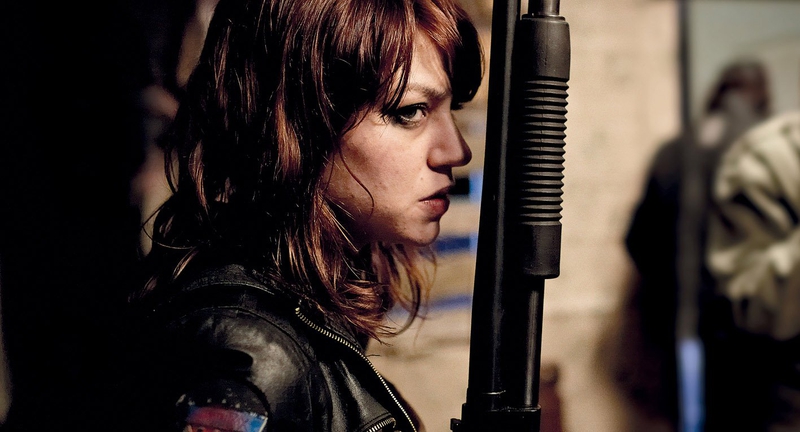 Editor's Note: This was originally published for FANGORIA on July 23, 2010, and we're proud to share it as part of The Gingold Files.

Take one part Calvaire/The Ordeal and one part High Tension, stir in some mutants and you have The Pack (La Meute), which unfortunately shapes up as one of the weakest in the past decade’s resurgence of French-language frights. While the movie (a North American premiere at Montreal’s Fantasia film festival) has the surface attributes of a gritty rural shocker, it suffers from both overfamiliarity and some serious story inconsistencies.

It starts out well enough: Charlotte (art-house darling Emilie Dequenne) is driving through the rural countryside when she happens upon hitchhiker Max (Benjamin Biolay) and gives him a ride. They wind up at a small middle-of-nowhere diner where a trio of bikers to whom Charlotte had previously given the brush-off show up to cause more trouble, only to be chased away by the place’s shotgun-wielding proprietor (Yolande Moreau). In these early scenes, first-time feature writer/director Franck Richard creates a nice sense of an unstable countryside where everyone appears to be armed or carries some kind of potential menace, and in Charlotte, he creates a heroine who’s clearly able to physically take care of herself.

Unfortunately, she doesn’t possess an awful lot of common sense. Max disappears after heading to the bathroom, and with the local law, represented by retired cop Chinaski (Philippe Nahon, playing against his usual villainous type), unlikely to be much help, Charlotte decides to snoop around the eatery late at night, all by herself, to track down a guy she didn’t even know that morning. This inevitably leads to capture, cages, chains, sharp objects, torture, cannibalism and all the other accoutrements that not so long ago played like rebellion against conformist mainstream horror, but have by now become a collection of clichés all their own.

It plays out in a dank visual style we’ve seen many times before as well—cinematographer Laurent Barès previously shot Frontier(s) and Inside—though the music by Chris Spencer (from the noise-rock band Unsane) and Ari Benjamin Meyers is effective at bolstering the suspense and excitement here and there. So who are “the pack,” you ask? Well, they’re a brood of monsterfaced humans who emerge by night from within a slag heap back behind the diner and feast on live humans left hanging as their meals—except when they don’t, in order to keep an important character intact to continue to the next scene.

The last half of The Pack contains a number of moments like this, where both logic and established characterization are thrown to the winds in order to keep the story moving, and the movie from ending before the 70-minute mark. One of the key principals makes a third-act change of allegiance that’s unexplained and unconvincing, and Charlotte forsakes a couple of wide-open opportunities to get out of her awful situation while the getting is good. Richard stages a couple of effective horrific sight gags in the midst of the carnage, but much of the movie is played dead straight, such that the assorted implausibilities and inconsistencies can’t be registered as satire.

Earlier this year, a planned free public screening of The Pack on the beach by the Cannes Film Festival was cancelled because of its graphic nature. Perhaps the movie’s gore (which is plentiful, but hardly as explicit as in the aforementioned French frighteners) might startle an unsuspecting general audience, but there’s little in The Pack to either frighten or excite anyone interested enough in this kind of survival shocker to see it in the first place.