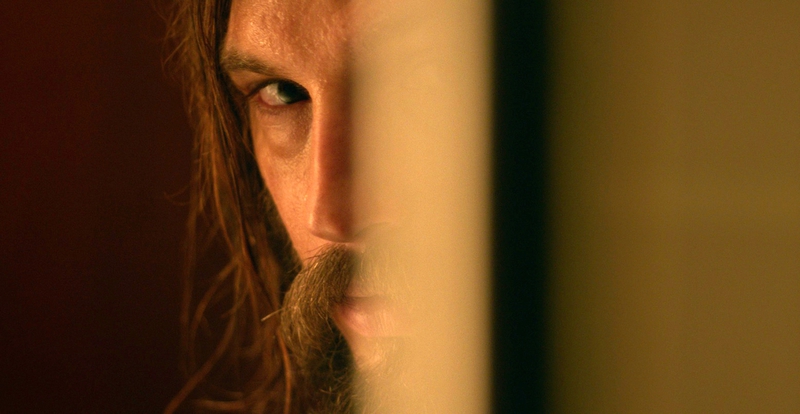 Editor's Note: This was originally published for FANGORIA on August 3, 2015, and we're proud to share it as part of The Gingold Files.

The Invitation is a movie that creeps up on you, and is a tough one to review in depth without giving away the qualities that make it great—and great it is.

Making its Canadian premiere at Montreal’s Fantasia festival, The Invitation has been picked up for worldwide distribution by Drafthouse Films, which doesn’t send it into release till 2016. Perhaps they’re taking their time developing just the right marketing campaign, since it’ll be a challenge enticing potential audiences without spoiling the secrets. You won’t find any significant reveals below either, but if you want to go in completely cold, suffice to say that The Invitation is a genuinely unnerving experience, one of the scariest times you’ll have in a theater this decade and a notable comeback for director Karyn Kusama.

After making a splash with her debut picture Girlfight, Kusama moved on to the studio-compromised projects Aeon Flux and Jennifer’s Body before reaffirming control of her work with the independently made The Invitation—and what masterly, taut control she applies to this material. Similarly, writer/producers Phil Hay and Matt Manfredi’s previous scripting credits on the likes of Clash of the Titans and R.I.P.D. gave little indication of the skilled building of tension and careful attention to character they demonstrate here. Together, they draw you slowly but surely into a confined situation, find just the right point of view through which to present it and crank up the tension and terror until it explodes.

The disturbance begins early in the picture, as Will (Logan Marshall-Green) and his girlfriend Kira (Emayatzy Corinealdi) have to make an unpleasant, unscheduled stop while driving to the Hollywood Hills home Will used to share with his ex-wife Eden (Tammy Blanchard). A terrible tragedy permanently separated them, and it has been at least two years since Will has seen Eden or many of their old friends. Now Eden has called on them all to reunite for a dinner party, and when Will and Kira arrive, she seems to have completely moved past the trauma, now happily living with new husband David (Michael Huisman).

Will, however, is far from over his grief, which is exacerbated by being back in the house he and Eden used to share. He becomes troubled by more than painful memories, though, as something seems off about the gathering and the guests. Their behavior seems suspicious, though only in small ways at first; as the night goes on, the topic of conversation turns to a group called The Invitation that David, Eden and some of the other attendees have recently joined, and which they claim has changed their lives and their outlook. Has the party been thrown to indoctrinate new members into this cult? Or is something even more threatening going on?

Kusama and the writers do a masterful job of teasing us with the frightening possibilities, keeping us guessing about whether Will is just being paranoid or they really are out to get him. The director and her cinematographer, Bobby Shore, isolate Will in the frame to emphasize his growing feelings of separation, and explore all the corners of the perfectly appointed house to establish a geography that will become crucial later. I’m loath to reference the too-often-referenced Rosemary’s Baby, but there are moments where Kusama and Shore, adopting their protagonist’s point of view, very effectively keep certain details just out of eyeshot, in the manner of that great bit in Polanski’s classic where Ruth Gordon is only partially seen making a phone call behind a half-closed bedroom door.

Marshall-Green does an excellent job of holding our attention and our sympathies, eliciting a sense of danger about circumstances in which a casual observer might find him to be overreacting. The rest of the cast, also including Lindsay Burdge from The Midnight Swim, Mike Doyle, Jordi Vilasuso, Michelle Krusiec, Karl Yune and Jay Larson, embody specific, distinctive and sometimes mutable personalities in ways that accentuate the mounting tension. Best of all is John Carroll Lynch, last seen hidden behind Twisty the Clown’s makeup on American Horror Story: Freak Show, as David’s new acquaintance from The Invitation. He’s so well-behaved that you just know there’s something not right about him; Lynch strikes that balance with quietly frightening precision.

Quiet precision is the name of the game for most of The Invitation, in fact; this is another slow burner that takes its time getting to the horrific goods. The trip is compelling from frame one, though, and proceeds with unerring unease right down to its perfectly judged, powerfully suggestive final shot.