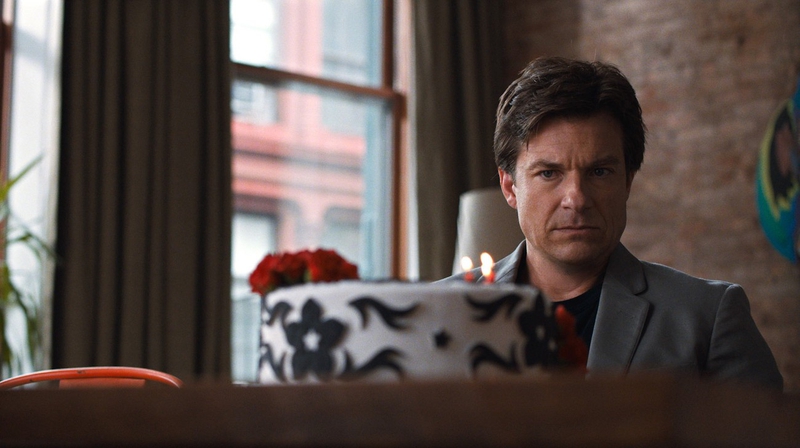 Editor's Note: This was originally published for FANGORIA on August 6, 2015, and we're proud to share it as part of The Gingold Files.

The Gift is not the first Blumhouse Productions film with adult characters, but it’s the company’s most grown-up thriller yet, dealing with messy, unpleasant emotions in ways that keep you off guard and on edge throughout.

Although it’s categorically in the spirit of the domestic psychofests spawned by the success of Fatal Attraction back in 1987, The Gift is less concerned with violent acting out than it is with interior disturbances simmering within its protagonists. (It actually has more in common with the 2000 French suspenser With a Friend Like Harry….) Right from the start, writer and first-time feature director Joel Edgerton slips slight undercurrents of unease into what seem on the surface to be happy occasions, specifically the arrival of Simon and Robyn (Jason Bateman and Rebecca Hall) at their new Hollywood Hills home. They’ve relocated from Chicago to LA, where Simon grew up, thanks to his recent promotion, while Robyn is trying to get past a failed pregnancy. They’re shopping for upscale housewares when they’re approached by Gordon (Edgerton), who claims to be an old friend from Simon’s youth.

Simon at first doesn’t recognize him. Then the name rings a bell, and pleasantries are exchanged. Next thing the couple know, Gordon has begun leaving presents at their doorstep, starting with a bottle of wine and continuing through stocking their koi pond with fish. The only issue, at first: They never gave Gordon their address. He seems just a little too anxious to become part of their lives, but Robyn, left alone to decorate the house while Simon is away climbing the corporate ladder, doesn’t mind the company, even when Gordon turns up on their doorstep uninvited. Eventually, Simon—who has since recalled Gordon’s high-school history as “Gordo the Weirdo”—starts to object to his intrusion into their lives…

And you may think you know where the story’s going from there, but Edgerton has a whole passel of surprises up his sleeve. He’s not out to dazzle us with his plot machinations, though; The Gift plays at a quiet, measured pace, and the reversals have more to do with what we gradually find out about the characters and their backgrounds. Deftly playing with expectations based on Attraction and other forebears (particularly where the couple’s übercute dog Mr. Bojangles is concerned), Edgerton the filmmaker is as unsettlingly insinuating as the creepy role he’s written for himself, and he plays Gordon with an outwardly friendly but just odd enough manner to keep us off-balance about his intentions.

Simon at first seems to be a variation on the sort of yuppie characters Bateman has essayed before (and plays very well here), but there’s more to him than meets the eye as well, which Gordon’s presence begins to draw out. The more we discover about their shared backstory, the more we wonder whether we can trust either one of them—and the same goes for Robyn. Hall, who was so good in the underrated ghost story The Awakening, proves to be our guide through the narrative and emotional twists and turns, playing the type of character who often frets on the sidelines in movies like this but here becomes both the sympathetic center and moral compass. There is the inevitable moment where Robyn is seen vulnerable in the shower, and an easy dream-sequence jolt that feels out of place, but otherwise Edgerton and Hall eschew cheap woman-in-peril theatrics.

Working with cinematographer Eduard Grau (who also shot The Awakening as well as the Ryan Reynolds pressure cooker Buried), Edgerton suffuses The Gift in a muted palette befitting a movie that focuses on repressed trauma and submerged secrets. It’s the way in which the protagonists deal with them psychologically rather than violently that gives The Gift its special chill, and even if you can occasionally see through Gordon’s ruses, the question of what he’ll do if and when he’s found out keeps the tension bubbling. Edgerton also weaves in a few clever, unforced ironies, like the fact that Simon works for a high-tech security company but claims to have no knowledge of, and evidently sees little use for, such protection himself. The latter isn’t typical thriller-victim carelessness, but overconfidence, and what could be a genre cliché instead reveals more about this man—which sums up what makes The Gift a superior exercise as a whole.