Review: THE DEATHS OF IAN STONE 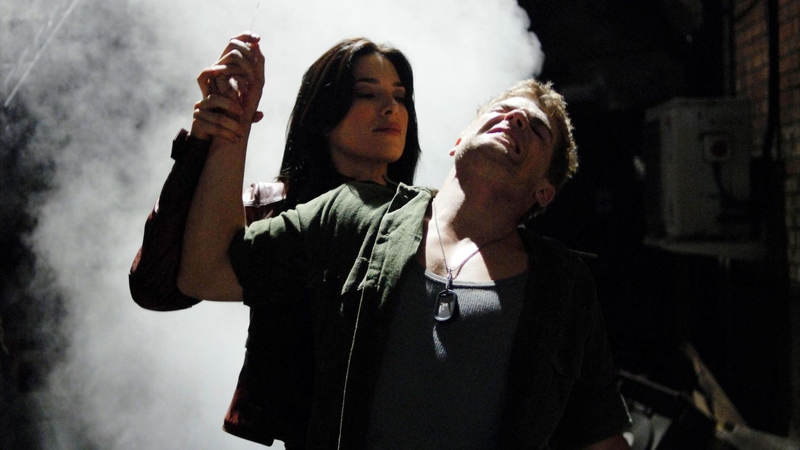 Editor's Note: This was originally published for FANGORIA on November 8, 2007, and we're proud to share it as part of The Gingold Files.

The Deaths of Ian Stone (playing in the 2007 After Dark Horrorfest) begins unpromisingly, joining its title character (played by Mike Vogel) in the midst of a hockey game, with pounding music and lots of fast cuts that seem to earmark this as just another flashy, trendy youth film. A little later, after Ian has suffered the first of his many demises, he spots a sinister character whose head vibrates in that Jacob’s Ladder manner, suggesting the movie will end with a familiar, predictable twist. Rest assured: It doesn’t, and it’s a little more thoughtful than that flashy opener would indicate as well. Stan Winston’s latest venture as a producer doesn’t fully satisfy in the end, but it’s a diverting enough alternative to the torture and slasher flicks currently flowing out of the off-Hollywood horror scene.

Screenwriter Brendan Hood’s scenario bears more than a few echoes of his script for the heavily bowdlerized They (with which this film also shares composer Elia Cmiral); both concern protagonists targeted and pursued by scary, spectral creatures. Once off the ice, Ian is driving home through pouring nighttime rain when he comes upon what at first glance is a dead body in the middle of the road. The corpse isn’t what it appears to be, and Ian suffers a gruesome fate—only to wake up in the middle of a different existence as an office worker. It’s not long before the murder-and-resuscitation process is repeated again, and again, and there’s a touch of The Butterfly Effect to Ian’s odyssey through multiple identities, each of them acquainted with a lovely blonde (Christina Cole from TV’s Hex) who appears in different guises: as his girlfriend, co-worker, neighbor, etc.

Since he retains memories of those other lives he’s left behind, Ian is understandably confused, but fortunately for him, there are a few characters on hand to provide him with a running series of much-need explanations. This is not so fortunate for the audience, as Deaths of Ian Stone becomes one of those paranormal thrillers that’s a little too dependent on exposition, which those other folks parcel out in pieces just so that it’s not all given away to the viewer at once. Yet by the end, the true nature of Ian’s situation and his relationship to his stalkers (unearthly beings called Harvesters that feed on human fear) isn’t entirely clear, and there are moments when new rules seem to be suddenly invented just to keep the story moving.

Nonetheless, it moves rather well under the direction of Dario Piana, a commercials veteran who brings an expected gloss to his images, but doesn’t hyper-edit the movie to death or overload it with FX—even with a veteran of the craft as one of the film’s prime movers. There are a couple of exciting sequences in which Ian flees or fights his supernatural adversaries, and a few chilling ones as well when they catch up with Ian or others who don’t have the luxury of living more than once. The prosthetic and (mostly) digital creations that do appear are expectedly and effectively well-wrought by the Stan Winston Studio team, whose CG creatures are fairly subtly executed as such things go.

Vogel, previously seen in the Texas Chainsaw remake and soon to appear in Cloverfield, carries the film with convincing desperation and eventual fortitude. While his status as the only American in a British milieu was likely a result of production and financing concerns, it works to set him somewhat apart from the world around him, accentuating his isolated plight. The plotting leading up to the resolution of his predicament may be a bit too muddled for that conclusion to be as powerful as it might be, but there are worse ways to kill 90 minutes than watching the Harvesters kill nine or so of Ian.