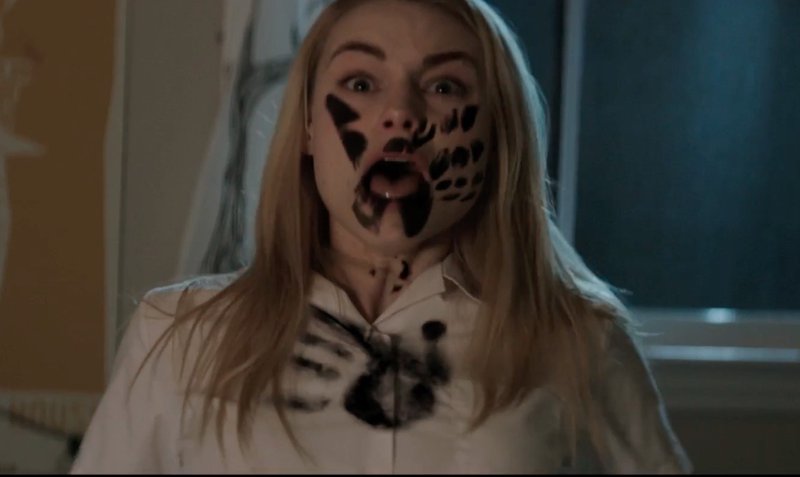 Editor's Note: This was originally published for FANGORIA on May 13, 2016, and we're proud to share it as part of The Gingold Files.

Director Greg McLean’s edgy talents are barely in evidence in The Darkness, a film that seems inspired by a misconception about Poltergeist while borrowing a great deal else from that 1982 classic.

Some people seem to think that Poltergeist is about a house built over ancient Indian burial grounds, when in fact the angry spirits are those of local dead people left behind beneath the dirt when they only moved the headstones!! In The Darkness (originally titled 6 Miranda Drive, an address never mentioned on screen), the bad stuff is blamed on the Native American Anasazi tribe and their five animal demons who are let loose to terrorize the film’s central Taylor family. Yet the movie is a little confused about that, since the child who’s cognizant of the spirits keeps referring to his new friend “Jenny.” Is “Jenny” the bison demon, or the snake demon, or the coyote demon?

That’s not the only way the movie, with a script credited to McLean, Shayne Armstrong and S.P. Krause, plays as if each of the three wrote a portion of it without knowledge of what the others were doing. Major plot points are raised, then unceremoniously dropped. The bulimia of teenaged daughter Stephanie (Lucy Fry) becomes a major issue in the first act, then is almost completely forgotten. Parents Peter (Kevin Bacon) and Bronny (Radha Mitchell) are confronted with weird/frightening/suspicious things that perturb them, and then it’s back to business as usual a scene or two later; they uncover expositional on-line information about the occult, then don’t do anything with it. The ability of young, autistic Mikey (David Mazouz, the young Bruce Wayne on Gotham) to discern the demons at first seems like it might be tied to his condition, but then it’s randomly revealed about a half hour in that he has brought home five totemic stones from a Southwest trip. It’s not hard to suspect a certain amount of postproduction tampering here.

After that trip (which an insert shot suggests is to the Grand Canyon when it looks a lot more like Canyon de Chelly, where the Anasazi really did hang out), The Darkness follows the Poltergeist playbook fairly closely. As opposed to the loving stick-together-ness of that film’s Freelings, though, there’s already tension between the Taylors that’s exacerbated by the arrival of the Native American nasties. That idea had possibilities, but like everything else in The Darkness, it’s haphazardly developed and doesn’t satisfactorily pay off.

McLean nails a couple of good, jolting moments, most effectively the sudden, vicious appearance of a dog in Stephanie’s bedroom, but too often the frights are dependent on the usual sudden appearances of characters in the frame and loud musical jolts. Bacon and Mitchell (the latter of whom also starred in McLean’s superior, undervalued killer-croc pic Rogue) seem fully invested in their roles, even as their struggle with the uneven awkwardness of their character development overtakes the Taylors’ battle with the Anasazi baddies. Throughout, The Darkness seems uncertain whether it’s a domestic drama or a horror story, and isn’t able to successfully mesh the two.

Even though McLean’s working in the same language, The Darkness feels like one of those movies where an overseas filmmaker has lost his footing when jumping into the Hollywood game. The fierceness of his Wolf Creek duo (and Rogue) is gone, replaced by standard-issue scare tactics and overly conventional hand-wringing. And if you don’t believe me, believe the reactions of the girls at the opening-night show this reviewer attended; they squealed and jumped their way through the trailers for Don’t Breathe and Lights Out, but made it all the way through The Darkness without flinching.