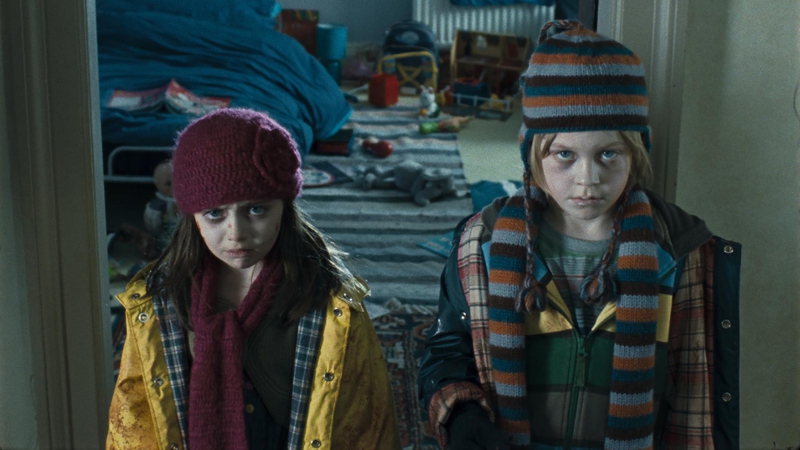 Editor's Note: This was originally published for FANGORIA on July 27, 2009, and we're proud to share it as part of The Gingold Files.

Orphan may be wringing some nasty, campy fun out of its evil-kid scenario in theaters, but The Children (screened at this month’s Fantasia film festival in Montreal, and coming on special-edition DVD from Lionsgate) is the real thing, a film that evokes true terror from the premise of our own offspring turning against us. In fact, never mind comparisons within its limited subgenre; this British production is one of the most effective fright features in recent years, period.

The setup is both simple and a little hard to sort out at first: Elaine (Eva Birthistle) and Jonah (Stephen Campbell Moore) bring their kids to the isolated country home of her sister Chloe (Rachel Shelley), Chloe’s husband Robbie (Jeremy Sheffield) and their kids for a Christmas celebration. For a little while, it’s difficult to keep track of which children belong to which adults, with the exception of Elaine and Jonah’s teenaged daughter Casey (Hannah Tointon), who’s annoyed about missing a friend’s party, distracts herself with a violent handheld video game and attracts a bit of the wrong kind of attention from Uncle Robbie. The younger ones, ranging in age from about 6 to 10, are meanwhile rambunctious in the way kids will be, romping and yelling and occasionally misbehaving, though little Paulie (William Howes) appears to be coming down with something. On the second day, that something spreads to the other tykes, and along with flu-like symptoms it gives them the urge to turn homicidally against the grownups.

Writer/director Tom Shankland, working from an original draft by The Cottage’s Paul Andrew Williams, never reveals the origin of the sickness that takes hold of the children (though there are occasional hints dropped about how it operates). There are shots of ominously rustling trees here and of malfunctioning radios there, but no concrete explanation of whether it’s natural, supernatural or alien. Much more important than the cause are its behavioral manifestations, which begin with grisly “accidents” and escalate into full-blown violent attacks. Shankland keys his incrementally, unerringly mounting tension into two ideas: the contrast between the little angels and their hellish actions, and the inability of the parents to grasp or believe that their own progeny have become their worst nightmare.

Unlike its fellow UK boys-behaving-badly opus Eden Lake (see review here), The Children doesn’t attempt to tie into the country’s current social concerns about disaffected, violent youth; its pint-sized villains are too young for conscious rebellion. The only teen in the bunch, Casey, is the film’s canniest and most resonant role: Too old to be afflicted by the syndrome transforming her brother and sister into little terrors, too young for her parents to believe her when she’s the first to cotton to what’s really going on, she’s caught in the middle of an increasingly desperate, inescapable situation. And it’s one that isn’t reliant on the genre crutches of cell phones that don’t work or cars that won’t start, but rather on the simple fact that by the time the survivors truly realize the nature of the threat they’re facing, it may be too late.

With cinematographer Nanu Segal turning the winter-wonderland exteriors and production designer Suzie Davies’ enticingly homey interiors into eerie theaters of desolation and death, Shankland builds an impressively sustained sense of dread punctuated by moments of genuine shock. (A lengthy, chillingly suggestive aerial shot is among The Children’s visual highlights.) Tointon and the quartet of adult actors all do fine work, but even more impressive are the performances the director elicits from their preteen co-stars. They seem like real, ordinary kids in the first act, avoiding precious or cutesy mannerisms, and their gradual transition into homicidal aggression is handled with a lack of exaggeration that forestalls any possibilities of camp. They behave as if it’s natural for them to pick up weapons and destroy those who gave them life, which may be the most frightening part of all.

Horror films centering on youngsters can run the risk of exploitation, in terms of either the brutality enacted by the kids or the violence committed against them. There’s plenty of both in The Children, and it is the movie’s achievement that it never seems to be straining the bounds of sensitivity in the interest of shock. It just sets up its elemental premise and carries it through its inevitable, harrowing developments, neither pandering nor compromising. Don’t miss this one.