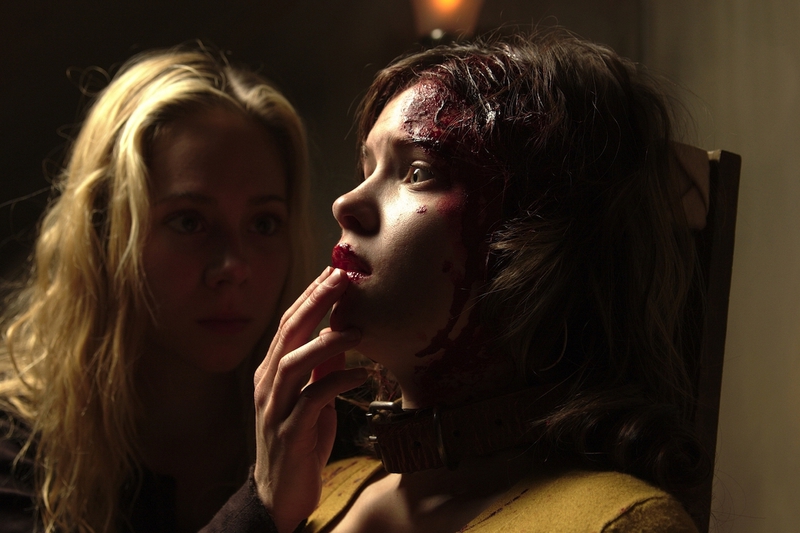 Editor's Note: This was originally published for FANGORIA on May 21, 2008, and we're proud to share it as part of The Gingold Files.

The Chair is a movie about the terrors that lurk close to home, and the extras on Lionsgate’s DVD reveal that its production shared the same theme. The audio commentary by director Brett Sullivan, scripter Michael Capellupo and producer Doug Patterson explains that the project’s particulars were inspired by whatever the trio happened to have available to them. So the principal location was Sullivan’s own house; a few scenes were written to take place on a boat, ’cause Patterson lives on one; and even Sullivan’s dentist’s office was pressed into service, not to mention his dentist. Far from being restricted by their limited means, this team has turned out a modest, well-crafted example of what they term the “slow burn” species of horror.

Alanna Chisholm stars as Danielle, a college student who moves into an old townhouse, having recently broken up with boyfriend Ryan (Nick Abraham). She’s got a history of psychiatric problems and may or may not be taking her meds, so when she starts seeing strange things around her new place (objects Poltergeist-ishly placing and re-placing themselves, etc.), her sister Anna (Lauren Roy) initially believes Danielle is having mental episodes—or that Ryan is playing pranks. After Danielle discovers a secret room behind a wall, however, she starts acting strangely as well—becoming surly, branding herself with scissors heated on a stove and, despite formerly being a vegetarian, eating cat food (yuck).

Capellupo’s script and Sullivan’s direction provide enough variety of incident and visuals to prevent the single-setting story from becoming bogged down or redundant. The pale, vulnerable-looking Chisholm ably carries the movie and conveys Danielle’s personality swings, and she and Roy—like Chisholm, a talented feature first-timer—have real sibling chemistry (even though they hardly look related). The cast and filmmakers keep everything grounded in reality even as the narrative gradually slides into the supernatural, and the possession truly takes hold of Danielle. She becomes inspired to construct a torture chair outfitted with a “panic vest”—a nasty-looking and very plausible contraption designed to slowly suffocate those strapped into it. And Danielle doesn’t have to look too far for potential victims…

That “slow burn” approach pays off in a genuinely disturbing final act that also brings the backstory subject of child victimization to the foreground, in a low-key manner that avoids becoming exploitative. Less persuasive is a late plot development that helps the narrative to its conclusion, though the filmmakers do deliver a wicked little punchline. They’ve also come up with a moody and slick-looking movie despite shooting on mini-DV, and Kiarash Sadigh’s cinematography receives a sharp showcase on the disc’s 1.66:1 transfer, backed by atmospheric Dolby Digital 5.1 sound.

The commentary is a little more sporadic than one might expect from a three-hander, but there’s plenty of good information shared as they cover The Chair from conception—during which Sullivan initially wanted to employ no dialogue at all, an ambitious but unworkable conceit—to postproduction, where little actor Nickolas Tortolano was removed from an early scene with a simple digital-editing trick. Sullivan, Patterson and Capellupo impress with their low-budget ingenuity and their ability to deliver a polished product under confined circumstances, which saw them switching their production office, craft services, makeup/hair area etc. from one room of Sullivan’s house to another as the spaces became required to shoot in. There are amusing moments too, as the director notes “a shot I learned from The Simpsons” and compares Danielle’s pre- and post-possession masturbation scenes.

The talk track is very nicely supplemented by a behind-the-scenes featurette that has been assembled with a sense of humor and an eye for the interesting stuff. This includes test footage incorporating a body-harness mount for the camera, a sped-up video tour of the house that reveals the cramped conditions and “simple shots” that were anything but—the aforementioned bits in which books and chairs supernaturally change positions, requiring over a dozen takes each. The stress of pulling these moments off is palpable, and has clearly gotten to Patterson when he’s seen on a rainy Halloween night at the end of a 22-hour shoot. Still, it all came to a happy conclusion—and the making-of piece itself wraps up with a funny “gratuitous ending.” The disc also includes the complete version of a vintage black-and-white film that’s crucial to the storyline, and figures in a moment in the movie that’s creepier than the footage is when viewed silent as a supplement.