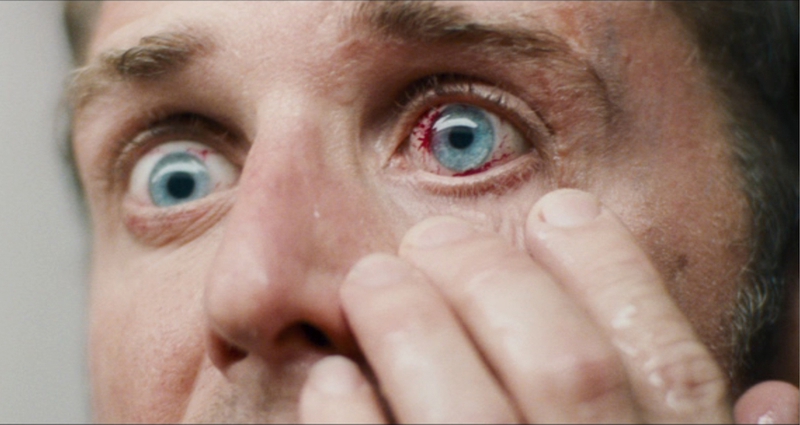 Editor's Note: This was originally published for FANGORIA on April 28, 2009, and we're proud to share it as part of The Gingold Files.

Tell Tale (playing at the current Tribeca Film Festival) is a movie that serves as a metaphor for itself on a couple of levels. It’s about a physical heart that’s transplanted from one body to another; the script transplants Edgar Allan Poe’s 19th-century classic story “The Tell-Tale Heart” into a 21st-century chiller; and the direction by Michael Cuesta, in concert with the performances, transplants an unusual amount of figurative heart into what could have played as B-movie material.

After opening with a juicy operation sequence, the movie settles in with Terry Bernard (Josh Lucas), the recipient of the new ticker who has another medical situation occupying his attention: His young daughter Angela (Beatrice Miller) has a genetic disorder that requires frequent visits to the family doctor, Elizabeth Clemson (Lena Headey). Terry and Elizabeth’s professional interactions are starting to develop into a personal relationship, to Angela’s approval, and there’s a warmth and charm to the trio’s early scenes together that quickly gets the audience on their side. The byplay between Terry and Angela is free of the precocious wisecrackery that often passes for father-daughter dialogue, and the burgeoning attraction between him and Elizabeth feels honest and lived-in.

Too bad it’s not just the beautiful doctor who soon has Terry’s heart beating faster. During a visit to the hospital, he starts getting that ominous thump-thump in his head when he crosses paths with a certain worker—one whom he discovers was involved in his transplant. This leads to a confrontation that doesn’t end well, and it soon becomes clear that Dave Callaham’s screenplay is pulling an inversion of the Poe “Tale.” Instead of serving as a signifier of the protagonist’s guilt, the noisy organ signals the guilt of others—compelling its recipient to act on its impulses.

The notion of a transplanted organ grafting the consciousness of its original owner into the new body housing it is a time-honored one in horror fare, and in many ways, Tell Tale follows the expected playbook. Terry struggles with the violent impulses inside him as the heart seems to develop a mind of its own; his interactions with his loved ones become strained; a detective (the welcome Brian Cox) investigates; a conspiracy is uncovered. Throughout, however, Cuesta keeps his focus on the personal drama and treats the material with as straight a face as possible. There are moments when one can feel the tension between the story’s more genre-melodramatic moments and the director’s emphasis on real-world concerns, but he succeeds in making his characters relatable and their situations compelling. Lucas very convincingly inhabits his haunted role, while Headey and Miller offer appealing support and Cox brings sardonic edge to his investigator, who comes to be a bit more approving of Terry’s actions than one might expect.

This is not to say, however, that Cuesta doesn’t deliver the goods for horror audiences. His recent credits include several episodes of Dexter, after all, and part of the verisimilitude he brings to Tell Tale involves not looking away when the going gets visceral. There are a few grisly highlights here that are all the more startling for being set amidst such a down-to-earth milieu, and Elvis Jones’ anatomically correct makeup FX help create some pretty squirmy moments. All of the craft contributions, in fact, are first-rate, which is no surprise given that Ridley and Tony Scott were behind the project as producers. Particularly noteworthy are the cinematography by Wendigo’s Terry Stacey, which amps up the atmosphere without overdoing either the gloss or the grit, and Patti Podesta’s production design, which makes the interiors and exteriors of Providence, RI (Poe’s old stamping grounds) variously homey and menacing.

Unlike fellow literary-horror favorite H.P. Lovecraft, Poe has had most of his notable film adaptations done as period pieces, but Tell Tale demonstrates that his themes can successfully be adapted to fit the modern day as well. Even as the film’s particulars are thoroughly contemporary, the author’s descent-into-madness motifs remain present (and a key line from “Tell-Tale Heart” is even spoken verbatim by one of the onscreen characters). While its match between heartfelt drama and blood-pumping terror may occasionally be irregular, Tell Tale pulls it off more often than not, and may get your heart pounding and blood freezing at a number of intervals.