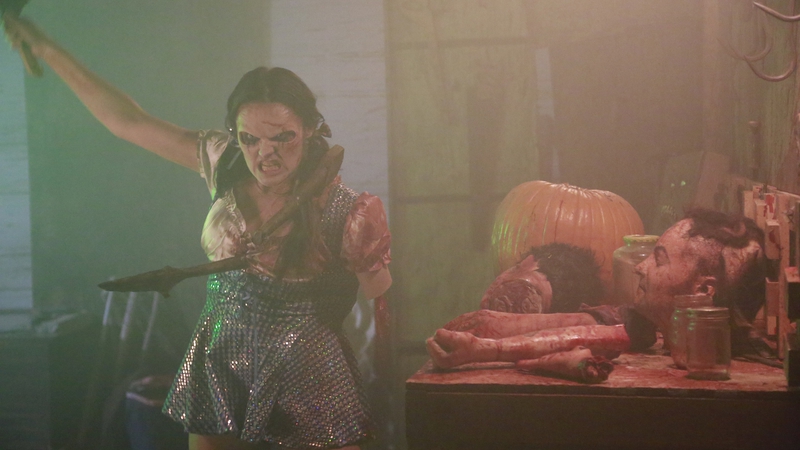 Editor's Note: This was originally published for FANGORIA on July 25, 2015, and we're proud to share it as part of The Gingold Files.

Tales of Halloween is a cinematic trick-or-treat bag full of goodies, an anthology feature showcasing a group of independent horror directors in fine form and, in a couple of cases, doing some of their best-ever work.

Halloween III: Season of the Witch fans know that that film was supposed to spearhead a series of unconnected All Hallows’ horror sequels, before commercial concerns spurred the return of Michael Myers. Tales of Halloween (a world premiere at Montreal’s Fantasia festival set for release in October) suggests what that planned franchise might have looked like in miniature, as its filmmakers find a remarkable number of ways to celebrate the eponymous holiday on screen. The John Carpenter influence is a little more explicit when the film is introduced by Adrienne Barbeau, essentially reprising her radio-DJ role from The Fog. Further setting the mood is a nifty opening-credits sequence animated by Ashley Thorpe, backed by a lushly spooky musical track by the great Lalo Schifrin, coaxed out of retirement with the help of his son Ryan, one of the anthology’s contributors.

Launching the segments themselves with just the right spirit is Dave Parker’s “Sweet Tooth,” which invents a new and nasty Halloween urban legend and sics it on an unfortunate teenage couple. Parker delivers a great scare amidst a dark-humored mood amply saturated in blood and gore, encapsulating the tone of the feature as a whole. Though a few of the stories go for serious creeps, most of them aim for shivery fun, and they largely deliver big time. That’s especially true of Darren Lynn Bousman’s “The Night Billy Raised Hell,” a wonderfully wicked piece deftly balancing carnage and cartoony sound FX, in which Barry Bostwick has a high old time playing a cranky suburbanite who’s an especially bad influence on a neighborhood boy.

Kids behaving badly is, not surprisingly, a recurring theme throughout Tales of Halloween. In Adam Gierasch’s “Trick,” a string of apparently senseless butchery pays off in the ironic revelation of what has motivated the young attackers, while in “The Weak and the Wicked,” Paul Solet incorporates Western-cinema themes to reveal the wages of childhood (and teenhood) sin. Venturing into even more bizarre stylistic territory, Lucky McKee’s “Ding Dong” is completely yet coherently berserk, a nutso riff on Hansel and Gretel allowing The Woman’s Pollyanna McIntosh to go completely around the bend with infectious enthusiasm.

The proceedings become calmer and creepier when Axelle Carolyn, whose initial inspiration launched this project, has a Halloween-night partier (Starry Eyes’ Alexandra Essoe) encounter a “Grim Grinning Ghost.” Another of Tales’ producers, Mike Mendez, delivers a hysterical riff on a different slasher franchise in “Friday the 31st,” incorporating the attendant holiday theme in a way you’ll never see coming, and that may have you helpless with incredulous laughter. (Mendez adapted the opening scene of an unproduced script called Dead Things for this bit, and it’ll make you want to see the whole thing produced sooner rather than later.)

Andrew Kasch and John Skipp joined forces for a story of deadly rivalry, “This Means War,” in which the setup lands stronger than the follow-through. A horrific spin on a classic O. Henry story is provided by Ryan Schifrin’s “The Ransom of Rusty Rex,” featuring John Landis in one of the most conspicuous of Tales’ many cameos. Wrapping things up, Neil Marshall turns one of Halloween’s most enduring icons deadly in “Bad Seed,” pitting his cool creature against a bad-ass Kristina Klebe. Fittingly for the omnibus’ closer, “Bad Seed” leaves off with the most explicit hook for a follow-up of all the episodes, and by the time the film reaches this point, you’ll likely want to see a second Tales happen.

Well-produced on its modest budget, with consistently strong makeup FX from numerous artists, Tales of Halloween offers a variety of visual schemes to keep the stories from running together even as they all take place during the same night, with the supporting characters occasionally crossing over between them. Adding to the fun for fright fans, the movie is chock full of familiar faces in both key and blink-and-you’ll-miss-’em roles. In addition to the actors cited above, you can catch the likes of Caroline Williams, Marc Senter, Noah Segan, Trent Haaga, Tiffany Shepis, John Savage, Graham Skipper, Mick Garris, Greg McLean and Adam Green, among many others; Greg Grunberg and Clare Kramer briefly reprise their Big Ass Spider! roles in “Sweet Tooth,” while “Grim Grinning Ghost” allows Barbara Crampton to reunite with both her Re-Animator director Stuart Gordon and her We Are Still Here co-star Lisa Marie. Spotting all these horror regulars (and, for the knowledgeable and sharp-eyed, the Tales directors themselves) on screen will have some fans going back for repeat viewings, and that’s not the only reason the movie may well become a Halloweentime perennial.