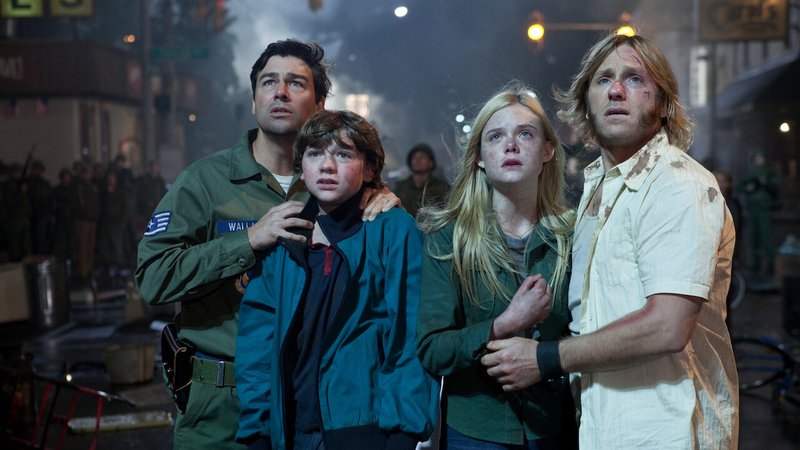 Editor's Note: This was originally published for FANGORIA on June 10, 2011, and we're proud to share it as part of The Gingold Files.

J.J. Abrams’ Super 8 indulges in two kinds of nostalgia—one directly, one not so directly. In the former sense, it calls up memories of those decades-ago days when young, budding moviemakers wielded cameras that shot small-gauge film and not video or hi-def digital, when more hands-on care and resourcefulness were necessary and the process was thus more of an adventure.

The other nostalgia Super 8 may well inspire, especially for audiences old enough to remember handling the titular format, is for the summer movies of the same period, before “summer movies” had curdled into corporate product—before the breathless anticipation for, say, Star Trek II: The Wrath of Khan eventually got replaced by the resigned cynicism that greets Pirates of the Caribbean: On Stranger Tides and its ilk. Back then, there was more heart to the stories and more engagement with the characters, no matter how many special FX surrounded them. As flashy as a movie like Poltergeist became, it never lost sight of the people at the core of its story.

Poltergeist, like Super 8, of course, was produced by Steven Spielberg, whose cinematic DNA is just as apparent in the latter film as it was in the former—though not quite to the extent that it’ll lead to charges of ghost-directing. There’s a handheld urgency to some of Abrams’ scenes that complements the Spielbergian gliding camera and lens flares, and Super 8 can be seen as an improvement on at least one production by his screen partner and mentor.

That would be The Goonies, which like this movie follows a group of rambunctious boys on an adventure, though these kids don’t scream at each other to the point where they get on your nerves. Rather than seeking pirate treasure, the goal of this suburban Ohio gang is to win a Cleveland Super-8 filmmaking competition, for which they plan to spend summer 1979 completing a zombie opus called The Case. At the helm of this homegrown epic is Charles (Riley Griffiths)—a bossy type whose personality and chosen hobby can be seen as attempts to stand out in his large, chaotic household—but he’s not the focus of the story. That would be Joe (Joel Courtney, a most empathetic newcomer), who has a much quieter, if not happier, home life. As Abrams eloquently establishes through just a pair of telling opening shots, Joe has lost his mother in an accident at the steel mill where she worked, and four months later, when the main action begins, neither he nor his relationship with his sheriff’s-deputy father Jackson (Kyle Chandler) have recovered. Dad prefers that his son engage in more typical pursuits like baseball camp, but Joe would rather immerse himself in The Case, for which he serves as the makeup and FX specialist.

The group also consists of Martin (Gabriel Preston) and Preston (Zach Mills), the designated actors, and Cary (scene-stealing Ryan Lee), the camera operator and junior pyromaniac always anxious to blow things up for that camera. Even this boy’s club needs a leading lady, though, so Martin manages to enlist Alice (the terrific Elle Fanning), a girl from the poor side of town and Joe’s secret crush object, as The Case’s ingenue. That makes the project an even more dramatic one for Joe—and even more so as the particular connection between his family and Alice’s ne’er-do-well dad Louis (Ron Eldard) is revealed. The young cast, a mix of nonpros and relative veterans, has effortless chemistry, and as the junior filmmakers set out to create their masterpiece, Super 8 achieves the stated goal of many a professional in the genre field: You’d want to watch these characters pursue their goal even if the fantastic and horrific didn’t intrude into their lives.

But intrude it does, in a most attention-grabbing fashion. While shooting a scene late one night at an isolated railroad station, Joe and co. witness—and are nearly killed by—a spectacular train derailment precipitated by a pickup truck that drives onto the tracks. The truck turns out to be driven by their science teacher, Dr. Woodward (Glynn Turman), who clearly knows that something unusual and dangerous was being transported on that train. Whatever it was has now escaped, and while the kids’ fallen camera recorded that incident, it’ll be a few days before they get the developed film back to witness it for themselves. (That’s one element which may play like science fiction for modern youths used to the instant gratification of video.)

In the meantime, strange events begin to plague their little town, with Abrams effectively building anticipation as to the what and why. He creates plenty of that suspense by keeping the “visitor” out of sight for much of the running time, much as Spielberg did in Jaws—though not for the same reasons, as he’s now got all the CGI money can buy, and deploys it well when the time comes for the big reveal. (Despite the heavy veil of secrecy surrounding Super 8, it’s not really a spoiler to reveal that the being is a hostile creature, though I will put a SPOILER ALERT on the note that when we finally see it, it closely resembles a second cousin to the beast in the Abrams-produced Cloverfield, with which it shares designer Neville Page.)

Also familiar from Spielberg’s oeuvre is the presence of the military as a force just as troublesome, if not more so, than the nonhuman threat, though this distrust doesn’t extend to all authority figures: Jackson and his fellow deputies earnestly, if not very successfully, attempt to solve the growing mystery and quell the concerns of their fellow townspeople. Through it all, the kids just try to get their movie done, and it’s a neat running joke that they use all the “production value” (as Charles puts it) of the crashed train and Air Force incursion as a backdrop until they’re forced into living a frightening, unearthly experience for real. (It’s no doubt a coincidence that Super 8 is opening the same day that The Troll Hunter, another movie about aspiring auteurs embroiled in monstrous events, is beginning its theatrical run.)

Expectedly, the film is awash in late-’70s signifiers, from the blatant (“My Sharona” and “Don’t Bring Me Down” on the soundtrack, Halloween and Dawn of the Dead posters on a bedroom wall) to the more subtle (a briefly heard news report about Three Mile Island). But Super 8 is no gimmicky flashback; it clearly comes from Abrams’ heart, and anyone who grew up during this period, loving horror and wielding a Super-8 camera (raises hand), will feel a special pang of recognition that’ll enhance the enjoyment. For everyone else, the film delivers the mix of thrills and appeal to the child in all of us that summer movies used to give us more often, once upon a time.

Oh…and be sure to stick around during the closing credits.