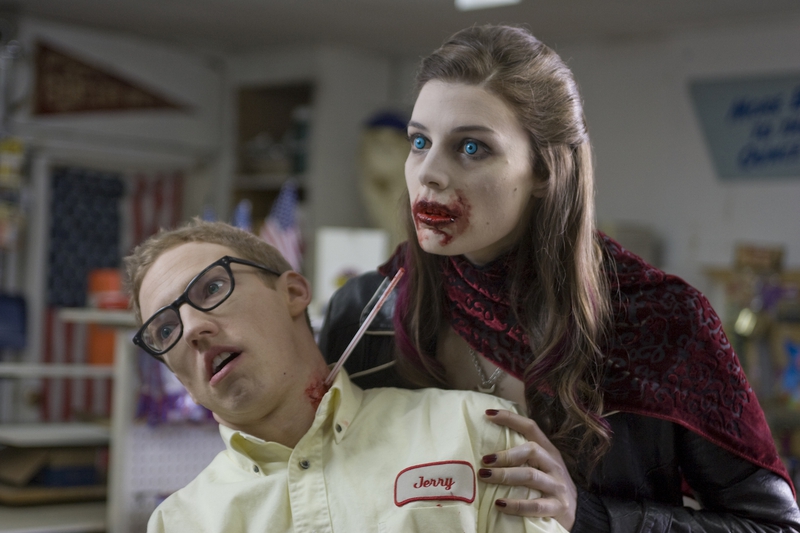 Editor's Note: This was originally published for FANGORIA on July 23, 2010, and we're proud to share it as part of The Gingold Files.

Suck, which is playing Montreal’s Fantasia film festival, looks and sounds like a lot of low-budget horror/comedy/rock-’n’-roll flicks of the ’80s (many of them, like this one, hailing from Canada), but with one important difference—it’s actually funny. It also respects both the horror and the rock sides of its story, avoiding spoofy condescension as it mixes the genres.

Writer/director Rob Stefaniuk also stars as Joey, leader of up-and-coming band The Winners. That moniker has largely been ironic, since they’ve been subsisting for years on tiny, often non-paying gigs and a meager fan base. As the movie opens, they’re about to begin a North American tour that should reverse their fortunes—but little do they know how much things are about to change for them. The night before their departure, bass player Jennifer (Jessica Paré) goes home with a seductive dude named Queeny (Dimitri Coats), and comes back with a thirst for blood. Having a vampire in the group at first seems to be a complication, given her need for human snacks during their travels from gig to gig, but soon proves to be an advantage, as her newfound magnetism makes the Winners into a hot ticket. It’s not long before other members start taking the plunge into undead immortality as well, and they’ve soon got vampire hunter Eddie Van Helsing (Malcolm McDowell) on their tails.

Those ingredients may sound familiar, but Stefaniuk keeps Suck fresh with a consistent string of clever lines, details and references. Rock ’n’ roll isn’t just a convenient story device in this movie; love for the music and its makers suffuses it throughout, and the cast boasts a lineup of name performers that a tour promoter would envy. And they’re not just glorified cameos, either; Alice Cooper, Iggy Pop and Henry Rollins are given, and bring their edgy charisma to, substantial roles as, respectively, a strange bartender/shaman who haunts Joey, a retired singer turned producer and the host of a rock show on radio station KCUS. Turning up in smaller parts are Moby as the frontman of punk outfit Secretaries of Steak (whose fans throw raw meat at them during concerts) and Rush’s Alex Liveson as a border guard. Coats, from the band Burning Bride, may be lesser-known but makes a strong impression as the ghoul who gets the whole situation started.

Stefaniuk also throws in fun visual homages to classic album covers, like The Who’s Quadrophenia and Bruce Springsteen’s Born in the U.S.A., and further keeps the eye engaged with occasional stop-motion setpieces created by Neil Burns. And the original songs (written by the writer/director himself with help from top Montreal rockers) deliver as well; the Winners may not be the greatest band in the world, but bad songs aren’t part of the gag.

Amidst all this, the horror content is not neglected, as Stefaniuk gives his makeup FX artist brother Ron numerous opportunities to let the blood flow. Genre fans will also get a kick out of McDowell’s committed turn as the would-be slayer, and his devotees will particularly enjoy the filmmaker’s use of footage of the actor from O Lucky Man! for the character’s flashbacks. As for the younger leads, Stefaniuk and his fellow Winners are ingratiating and spirited, but the standout is Paré in a genuinely sexy turn as a girl who’s kissed the dark side, and she likes it. Suck may travel a road that has been explored in numerous other films before, but it makes plenty of entertaining stops along the way, and you can’t beat the company.