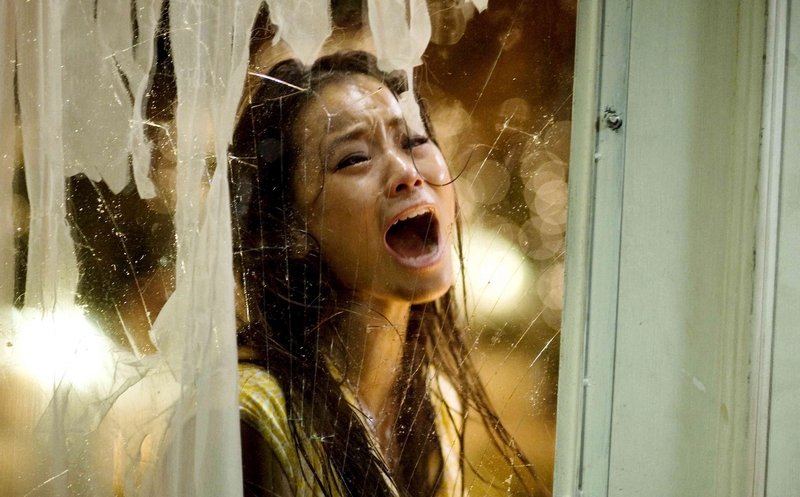 Editor's Note: This was originally published for FANGORIA on September 11, 2009, and we're proud to share it as part of The Gingold Files.

It’s finally happened—after several years of movies attempting to recapture the spirit of 1970s/early-1980s horror cinema, we now have one that harks back to the fright films of the 1990s. Sorority Row, officially a remake of Mark Rosman’s ’83 The House on Sorority Row (though the credits try to fudge the issue by citing its original title, Seven Sisters), feels much more akin to the snarky-mouthed slasher features that, though they only made up a small fraction of the genre output in the ’90s, came to define it in the eyes of many fans.

Sorority Row would have fit in very comfortably alongside the likes of Scream and I Know What You Did Last Summer—particularly the latter, as it too deals with bloody vengeance directed at a bunch of attractive young friends who have covered up an accidental killing. In this case, that death is the messy end result of an elaborate prank orchestrated by five Theta Pi sisters as payback against Garrett (Matt O’Leary), one girl’s horndogging boyfriend. Unfortunately, he winds up getting a little overzealous with a four-armed tire iron, and soon there’s a body that needs to be disposed of and a secret that needs to be kept. Cassidy (Briana Evigan), the most level-headed of the quintet, is the voice of conscience who insists on alerting the police, but in the end she gives in to queen bee Jessica (Leah Pipes), who will brook no threats to her golden future and convinces the rest to stick to the “secrecy and solidarity” part of their sorority motto.

Needless to say, all of their futures become significantly less bright eight months later, when the girls, also including Ellie (Rumer Willis), Claire (Jamie Chung) and Chugs (Margo Harshman), throw a graduation party at their house (which is under renovation, the better to provide more deserted areas for potential victims to wander into). Threatening photos and messages sent to their cell phones have the guilty friends suspecting Garrett, while the audience scans the landscape for other potential culprits. Could it be Maggie (Caroline D’Amore, who looks more like an older Danica McKellar than McKellar does now), the newly arrived sister of the deceased? Housemother Mrs. Crenshaw (a tart Carrie Fisher), who has made herself scarce for the evening? Or, as one or two of the girls start to suspect, has their victim come back from the dead to punish them?

Viewers familiar with the mechanics of slasher-mystery-making may peg the villain’s identity well before it’s revealed, but they’ll appreciate the panache that director Stewart Hendler brings to the moments where the graduation-robed-and-hooded stalker takes out the Theta Pi team. He times the bloody impacts—mostly with a blade-augmented variation on that tire iron—for maximum seat-jumpage, and he and cinematographer Ken Seng suffuse the proceedings in grainy, threatening atmosphere and come up with a number of creative ways to utilize the limited settings (the room full of soap suds is a nice touch). Along the way, Hendler and screenwriters Josh Stolberg and Pete Goldfinger throw in a couple of respectful shout-outs to their inspiration: There’s a reference to Rosman University, and the lethal-headed walking stick that served as a key murder weapon in the ’83 film makes a cameo appearance.

There are a couple of scenes suggesting that the outside world awaiting these graduates—if they survive—is only slightly less threatening than their immediate situation; besides Mrs. Crenshaw, the only adult characters are a conniving, manipulative politician and a lecherous shrink. Beyond that, Stolberg and Goldfinger’s script is a straightforward body-count scenario that doesn’t offer many surprises but has fun filling in some of the details. The girls trade spiky banter and trash talk, though their dialogue becomes increasingly flip and humorously aware the direr the proceedings become, which dissipates the tension somewhat. That’s particularly true in the final reel; once the malefactor’s identity is sprung and the climactic confrontation gears up, Sorority Row goes strangely listless when it should be sizzling.

Since the protagonists are largely defined by how they respond to their predicament, it’s no surprise that moral opponents Pipes, who gives good biyotch, and Evigan, in a nicely sympathetic turn, register strongest among the actresses. (Given Evigan’s vague resemblance in looks and husky voice to a young Demi Moore, one might contemplate the irony of the numerous scenes she shares with Willis.) Fisher is a hoot in the housemother role, particularly when she shows up toting a shotgun she’s not afraid to use, while the guys (also including Julian Morris, Matt Lanter and Maxx Hennard) mostly serve the decorative/cannon fodder purposes that girls tend to do in many similar flicks. Overall, in the long pantheon of murdered-youth movies, Sorority Row occupies about the same place as its stylish and rather underappreciated predecessor, offering enough imaginative touches to elevate, if not transcend, its conventional basic material.