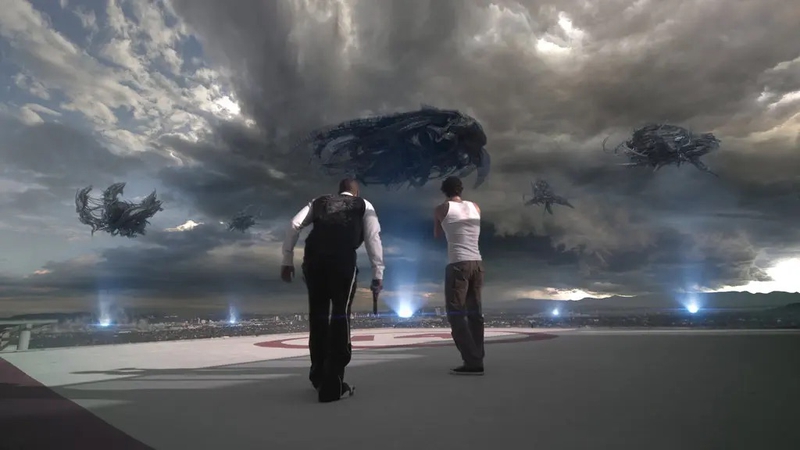 Editor's Note: This was originally published for FANGORIA on November 12, 2010, and we're proud to share it as part of The Gingold Files.

Until it opened, Skyline was the kind of movie it’s easy to get behind in theory; visual FX specialists turned filmmakers Colin and Greg Strouse put it together themselves after their directorial debut, Aliens vs. Predator—Requiem, fell victim to serious studio interference. Now that Skyline has been released (sans any press screenings), the one area in which it can be said to improve on AVPR is that you can see what’s going on—and unfortunately, you can hear it too.

This alien-invasion saga is no doubt intended at least partially to function as a showreel for the Brothers Strouse’s digital wizardry, and if you’ve never seen Independence Day, Spielberg’s The War of the Worlds, Starship Troopers, etc., you may be momentarily dazzled by some of their work. You may also be one of Skyline’s central characters, who go through the whole movie acting as if they’ve never seen or heard of an extraterrestrials-attack movie before, and enact a series of mind-numbingly banal situations in between running and explosions. Their interaction and dialogue is so far removed from any recognizable human behavior that the film winds up playing like The Room with spaceships and creatures added. The one lamentable moment that does carry recognizable echoes is when a room full of partiers, including our “heroes,” watch and laugh over the video broadcast of a gay tryst between two unsuspecting neighbors—not exactly the way to get us on the protagonists’ side.

But then, there’s very little reason given to care about these barely sketched people at any point. Jarrod (Eric Balfour), who is apparently some kind of artist, is in LA with his pregnant girlfriend Elaine (Scottie Thompson), visiting his pal Terry (Donald Faison), who is apparently some kind of producer. More importantly, since he’s the one African-American character, he packs heat and says things like, when fighter jets streak over his high-rise, “They called in Homeland Security, ’cause this party’s gonna be da bomb!” Late at night after that bash, strange lights drop out of the sky and hypnotize the populace, who are then sucked en masse up into massive spacecraft that appear over the city (Skyline’s one truly arresting image, albeit one already widely familiar from the ads). Jarrod, Elaine, Terry, the latter’s girlfriend Candice (Brittany Daniel) and his on-the-side babe Denise (Crystal Reed) manage to survive unsucked—perhaps because, as we learn, the aliens are after human brains, and they’d be hard-pressed to find one among this bunch.

Anyone who complained about any insufferability regarding the characters in Cloverfield (a similar city-destruction scenario from the survivors’ point of view, and a far more successful one) will bite their tongues clean off if they see Skyline. As will anyone who griped about the recent Monsters (produced under similar circumstances, for far less money but with far greater dramatic ambition) seeming slow. Skyline contains a good deal more action, but it’s empty and uninvolving because we’ve seen it all (from the designs to the staging) before, and because the characters respond to it with an uninterrupted series of clichéd lines and moronic decisions. A good deal of the movie is confined to Terry’s apartment, where he, Jarrod and the women, joined midway through by building worker Oliver (Dexter’s David Zayas) hole up—a budgetary consideration given the movie’s homegrown nature, certainly, but there’s no sense of claustrophobic terror, just cabin fever from being stuck with these fools. For extra annoyance, the Strouses and their screenwriters, Joshua Cordes and Liam O’Donnell, seem to have also taken a few cues from The Room when it comes to the female characters, who do nothing but lie about in skimpy costumes, stand around uselessly and/or scream while the guys take all the action.

And then, just when you think Skyline can’t get any dumber, it takes a couple of turns in the final reels that absolutely defy belief. Attempting pathos and a rousing climax, these scenes result only in bad laughs instead, and instead of ending, the film just stops in the middle of a crucial setpiece, the end titles begin and the viewer is left feeling had. More than once along the way, someone on screen pleads, “Is it over?”—and that’s the only time anyone in the audience is likely to sympathize with them.