Review: SHE WHO MUST BURN 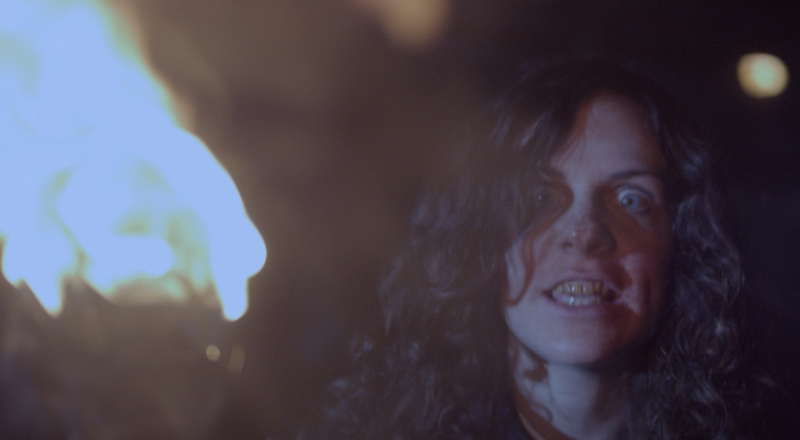 Editor's Note: This was originally published for FANGORIA on July 28, 2015, and we're proud to share it as part of The Gingold Files.

She Who Must Burn is a mix of horror-film stylings and social concerns, of the type often made by impassioned up-and-coming filmmakers anxious to make a statement. The man behind this one, Larry Kent, is instead an 80something veteran of provocative cinema, which very much informs its unapologetically direct approach.

The movie, a world premiere at Montreal’s Fantasia festival, tackles the touchy subjects of woman’s rights and the freedom to choose amidst a devoutly religious environment. A younger auteur interested in appealing to as many points of view as possible might offer at least touches of sympathy to both sides of the conflict, but old-time firebrand Kent has no interest in such equivocation. He knows exactly where he stands on the subject, and offers a bluntly effective black-and-white scenario set in a very evocatively filmed rural landscape.

In a depressed mining town (shot in the director’s native Canada but evidently located somewhere in the lower 48), Angela (Sarah Smyth) runs a planned parenthood clinic out of her home, whose front lawn is regularly visited by sign-bearing local protestors. Stoking the flames of their displeasure with Angela’s activities is pastor Jeremiah Baarker (Shane Twerdum, who scripted with Kent), who seems willing to peacefully mediate with Angela to her face—at least at first—but behind the scenes is a hypocritical, manipulative zealot who will brook no deviation from or opposition to the word of the Lord. When Angela’s positive influence reaches into Jeremiah’s own home, it sparks Jeremiah, his family and followers to take their persecution into literal witch-hunt territory.

Kent does provide his sectarian villains a bit of motivation for their virulence against Angela: The area is being plagued by stillbirths, which they blame on Angela’s recent arrival and anti-doctrine attempts to assist women in trouble. It doesn’t help their view of her that Angela is “living in sin” with sheriff’s deputy Mac (Andrew Moxham), who does his best to protect her when the opposition threatens to get violent. There’s also a plausible explanation for the lost little lives, though—area drinking water becoming contaminated by chemical runoff from the mines—and little empathy offered for Jeremiah and his increasingly fanatical flock. (One of them does voice his concern that the leader is taking things too far, but as far as we see, he’s the exception that proves the rule.) Most hysterical of all is Jeremiah’s sister Rebecca (Missy Cross), driven to derangement by the loss of her own infant, speaking in tongues and visibly thirsting for Angela’s blood.

She Who Must Burn is not subtle, but it works. Kent tells his story in a direct, no-nonsense manner emphasizing handheld camerawork to add immediacy, juxtaposed with ominously gorgeous widescreen landscape shots emphasizing the isolation of a town that seems frozen in time. (The story is apparently set in the modern day, but cell phones and the Internet are nowhere to be seen.) The actors contribute fully impassioned performances, led by Smyth, who carries the movie; her Angela is not an ideological crusader but rather motivated by an innate desire to help her fellow woman, to the point of standing strong and refusing to give in to the increasingly threatening pressure to leave. Twerdum is equally effective at both quiet and impassioned malevolence, and there are sympathetic turns by several actresses as those Angela is trying to help, including an unrecognizable Jewel Staite from Firefly and Serenity as Jeremiah’s abused wife.

For most of its running time, She Who Must Burn plays as a dramatic thriller driven by the threat of religious retribution, before plunging full-on into horror during the third act. What transpires in that climactic action is as in-your-face as what has come before, and there’s a power to that consistency; Kent is as impassioned as his characters in expressing his feelings about an intolerance that still exists in many areas. It’s easy to say after viewing She Who Must Burn that a situation couldn’t actually escalate to the point it does on screen in the reality of current society. But the occasional headlines tell a different story. “It’s a free country,” Mac tells the sheriff early in the film. “Where?” is the sheriff’s reply. That’s She Who Must Burn’s message in a nutshell.