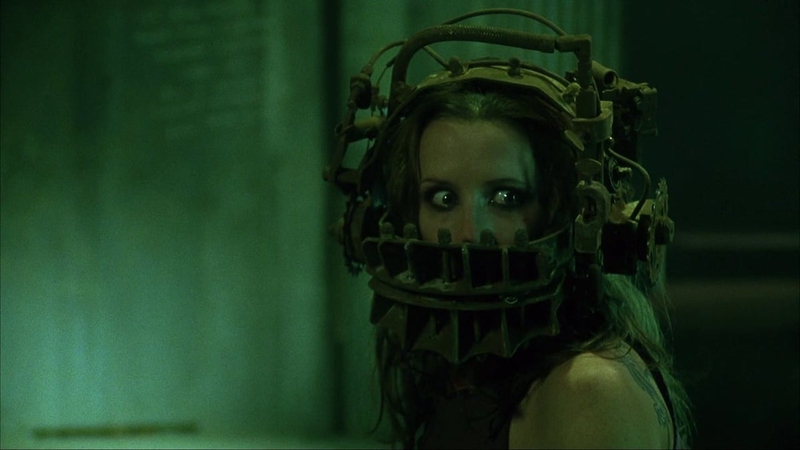 Editor's Note: This was originally published for FANGORIA on October 28, 2004, and we're proud to share it as part of The Gingold Files.

There’s one really great plot twist in Saw, and I’m not even gonna mention when in the movie it arrives ’cause I don’t want to give anything away. I will say that if you know your character actors, don’t examine the film’s cast list too closely before you see the movie, and I’ll also say that it’s the kind of moment that has the effect of making the overall feature seem somewhat better than it is.

Considering that quite a bit of the ad campaign is centered on severed bodily extremities, it’s only appropriate that the movie isn’t quite equal to the sum of its best parts. As the directorial debut of James Wan (well, not really; he previously co-helmed and co-wrote the Aussie microbudgeter Stygian, which is referenced on a street sign here), Saw is the sort of precocious feature that makes one anxious to see what its creators will come up with next time around.

For now, Wan and scriptwriter Leigh Whannell, who concocted the story together, have come up with a killer setup for a scary movie: two men (Cary Elwes and Whannell) wake up chained to opposite sides of a dank bathroom, with a dead body lying on the floor between them and no idea how they got there. At least, at first; they soon find that they are the victims of an unseen tormentor who knows an awful lot about their lives, and has pitted them against each other in a perverse game that challenges not only their ingenuity, but their willingness to do harm to themselves and each other. He’s a serial murderer (named “Jigsaw”) who prefers to set up his victims to seal their own fates, ensnaring them in death traps that are as elaborate as they are (it would seem) inescapable.

Of course, there’s no way to show this without venturing beyond the confines of that room, and after building up a strong aura of claustrophobic tension in the early scenes, Wan and Whannell head outside for a series of flashbacks and flash-durings that flesh out the story. Some of this stuff works: As we find out more about Elwes’ doctor and Whannell’s photographer, the filmmakers set up an effective mind-tease—how are these two connected, and how did they become pawns in Jigsaw’s game? And some of it doesn’t, particularly a key subplot involving a detective (Danny Glover) tracking the madman. The chronology of his involvement becomes confused, Glover is allowed to go way over the top in his performance and in at least one key setpiece, he and a fellow policeman do all the dumb things that dumb movie cops always do to allow the villain to get the better of them.

On a pure horror level, Wan and Whannell clearly worked overtime to pile on the creep-out factor. The death traps are diabolical and the outcomes nasty indeed, and a sequence in which one victim (Shawnee Smith) must commit an act of evisceration to save herself is genuinely hair-raising. Jigsaw disguises himself with creepy props—most notably a harlequin doll—and ensnares in his scheme both innocents (including the doctor’s wife, played by Monica Potter, and child) and suspicious characters (most notably one portrayed by Michael Emerson, a memorable villain on TV’s The Practice a few years back). Wan shoots all this in an assaultive style, utilizing rapid-fire editing, loud music (by Charlie Clouser) and other aural FX, that holds the attention for a while but becomes wearying and, frankly, seems overly familiar by this point in the serial-killer/human-horror subgenre. The longer the film goes on, the more its “intensity” seems manufactured rather than growing out of empathy for its put-upon characters.

Saw has been drawing a lot of comparisons to Se7en, and the similarities are many—not just the dank-and-gritty visual style, but also the theme of the killer punishing his victims for perceived moral failings. Wan and Whannell have certainly upped the ante in terms of the villain’s elaborate means, but these are so far removed from identifiable reality—would any true-life murderer go to this much trouble to make his point?—and the story is so tied up in temporal knots that Saw doesn’t have the chance to truly creep under your skin and stay there. Still, you can’t fault Wan and Whannell for being so eager to impress, and for wanting to shoot the works on their first big cinematic break. Their malefactor preys on people whom he feels have wasted their lives’ potential, and it’s a message that the duo have clearly taken to heart.