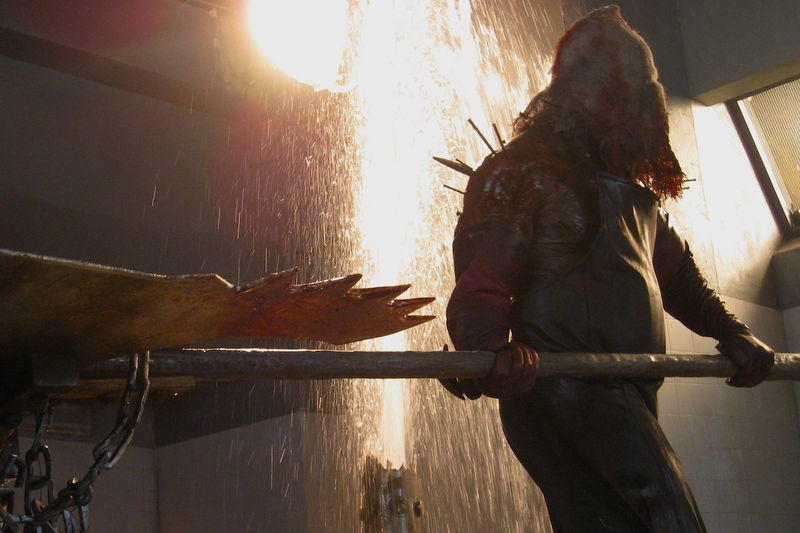 Editor's Note: This was originally published for FANGORIA on September 10, 2010, and we're proud to share it as part of The Gingold Files.

It isn’t really giving anything away to say that Resident Evil: Afterlife ends with an explicit setup for a fifth film in the franchise, promising that it will start with a pretty epic action setpiece. But any excitement about that is tempered by the fact that Afterlife’s predecessor, Extinction, also concluded by laying some exciting groundwork for this follow-up—but after paying it off in spectacular fashion, Afterlife spends the next 80 minutes running on fumes.

The big news about Afterlife, of course, is that it has been filmed in 3-D—“filmed” being the operative word, as opposed to being post-converted. The process thus comes off better here than in the murky likes of Clash of the Titans, and even than in Piranha (where the images didn’t extend past the screen plane). Unlike some filmmakers who’ve employed the gimmick, Evil overlord Paul W.S. Anderson—once again scripting, and returning to the director’s chair for the first time since the original movie—isn’t too proud to indulge in the in-your-face possibilities, sending all sorts of weapons, splattered brains, etc. comin’ at ya.

This is especially fun during the lengthy opening sequence, in which the clones of Alice (Milla Jovovich) introduced at the end of Extinction pay a visit to the subterranean Japanese headquarters of the nefarious Umbrella Corp., with much sword-swinging, bullet-blasting and flying glass resulting. Anderson stages this action cleanly and coherently, and here, his use of Matrix-style slo-mo makes sense, allowing the eye to focus more easily on all the hurtling 3-D elements. Unfortunately, once this mayhem is over and the focus narrows down to the “real” Alice, the technique seems to have been employed to serve the same purpose as in Friday the 13th Part III three decades ago: to cover up for the complete lack of dimension in the characterizations and storytelling.

Four years after the Umbrella assault, Alice is seeking a place called Arcadia, from which a transmission has been broadcast promising safety and shelter amidst the zombie-ravaged wasteland the world has become. An encounter with nasty Umbrella head honcho Wesker (Shawn Roberts) leaves her stripped of the superhuman abilities she gained in the previous sequel—though she’s still able to survive a fiery plane crash shortly thereafter. In any case, that’s the end of any development of Alice’s persona, as she makes a stop in Alaska and picks up fellow survivor Claire Redfield (Ali Larter), then moves on to LA, where the duo join a motley band holed up in a prison, trying to figure out a way to get past the flesheating hordes massing outside.

And that’s pretty much all the plot there is for the central hour, as the paper-thin characters deliver weak dialogue in dank, dimly lit rooms. Afterlife is so completely lacking in human interest, it almost seems intentional: Supporting players get killed off, without a second spent mourning or even acknowledging their deaths; Claire is reunited with her brother Chris (Prison Break’s Wentworth Miller, slumming) after years apart, and neither one shows the slightest interest in what the other has been up to for all this time.

But hey, it’s not the people you go to a Resident Evil movie for—it’s the zombies that fans are really concerned with. They’re likely to be disappointed with this installment, as the ghouls are largely standard-issue and don’t get much screen time. There is a new breed introduced—the Majini, which sport big, nasty, face-sucking mouth parts—but I liked these guys better when they were called Reapers in Blade II, which gave them more to do. For the sake of variety but with absolutely no backgrounding explanation, Anderson throws in another menace, the Axe Man, a hooded giant wielding an enormous blade-cum-sledgehammer. (Originally introduced in the Resident Evil 5 game, the Axe Man has here been slightly reconceived to resemble a cross between Silent Hill’s Red Pyramid and the Beast from Sweatshop.)

The battle between our heroes and the Axe Man contains a couple of nifty gags, and there’s a great moment at the end of a rooftop encounter between Alice and a swarm of the undead. But these are needles in a haystack of well-worn zombie/postapocalyptic conventions, given neither the dramatic nor visual spark or variety that a film series on its fourth installment desperately needs. Even when the action eventually switches settings for the final confrontation, Afterlife doesn’t rise above a low boil, and at least one component of the climax feels like a reshoot allowing one of the apparently deceased to survive after all. Hopefully, he and Alice and the rest of the gang will have more interesting things to do when Resident Evil: Rebirth or whatever they wind up calling it comes out a few years from now.