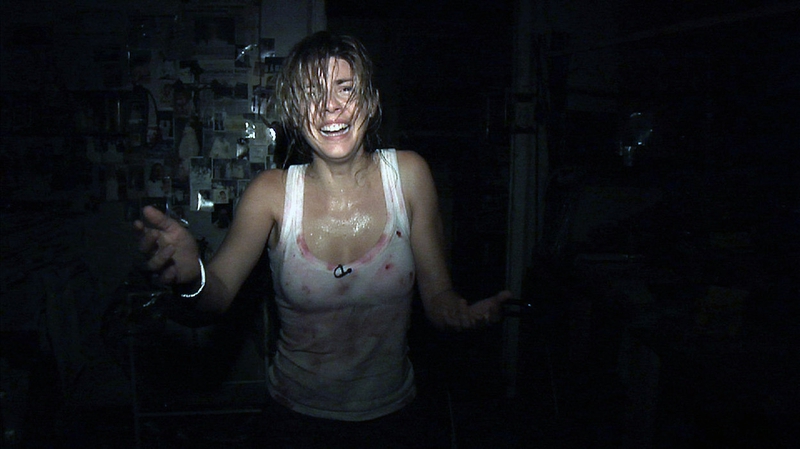 Editor's Note: This was originally published for FANGORIA on July 7, 2008, and we're proud to share it as part of The Gingold Files.

This is gonna be a fairly short review, because all that really needs to be said is that [REC] is an absolute must-see, a ferociously intense, compellingly well-crafted exercise in scaring you right out of your seat. Actually, it’ll be a little longer than it might have been due to the necessity of noting that, for U.S. fans, it will remain hard to see, at least for the time being (it just played two very well-received shows at Montreal’s Fantasia festival). Although it was a huge hit in its native Spain and is already available on DVD and Blu-ray there, [REC]’s Stateside exposure has been held back in deference to the October release of its English-language remake, Quarantine. Even though that film has been written and directed by the Dowdle Brothers, who won notice with their fairly similar vérité-style approach to The Poughkeepsie Tapes, and is apparently in large part a shot-for-shot, detail-for-detail duplication of [REC], it will still be interesting to see if the alchemy can be recaptured that makes Jaume Balagueró and Paco Plaza’s movie such a triumph of you-are-there terror.

Part of the achievement of the two directors (who scripted the film with Luis Berdejo) is the fact that they have spun such a gripping and shocking experience out of basic ingredients that are by now familiar to fright fans. One of several recent “found footage” movies, [REC] is presented entirely through the camera lens of Pablo, the cameraman accompanying Ángela (Manuela Velasco) on her late-night news program While You’re Asleep. On a routine show covering a Barcelona fire department, on a night when nothing terribly exciting at first seems to be going on, the station gets a call to investigate reports of a screaming woman, and Ángela and Pablo tag along to the small apartment building from which the call came. The narrative setup is reminiscent of forebears from The Blair Witch Project to Cloverfield—ordinary, bordering on banal, footage with no signposts of the terrors to come—but it succeeds in allowing us to get to know its central characters before all hell breaks loose.

And break loose it does. Once Ángela, Pablo and the firefighters, joined by a few cops, discover just why that woman is screaming, [REC] lets loose with a series of increasingly unnerving crises and confrontations, and it soon becomes clear that a horrible sickness is loose in the building, one that turns those infected into slavering, bloodthirsty human monsters. Such fast-moving “zombies” have been done many times in recent fear fare as well, but here the gambit is particularly effective because, with one or two exceptions, we get to know them all before they become ghouls—meaning that the suspense derives from who’s going to catch the virus next in addition to whether those uninfected will be able to escape them.

More should not be said about how the story unfolds (though the remake’s title reveals one of the notable complications), because [REC] is one of those films that follows Joe Bob Briggs’ cardinal rules of horror movies: Anybody can die at any time. The only one we know for sure will make it at least most of the way is Ángela, whose insistence that the world needs to know what’s happening provides the perfect rationale for the taping to continue in the midst of the struggle to survive. Still, by the halfway point, you’ll forget all about such rationalizations, because you’ll be too busy freaking out at the succession of in-your-face jolts and genuinely horrifying setpieces that Balagueró and Plaza throw at you with absolutely no mercy. Their terrifying cinematic assault on your senses is so overwhelming that only later will you be able to breathe and consider what a remarkable technical achievement it is as well, staging all of its brutally plausible mayhem and makeup-FX gore within a series of long, unbroken takes.

There are moments when the pace calms down a bit for moments of character (the largely unknown cast is superb in their naturalistic performances) as well as humor; I especially liked the moment where one firefighter asks Ángela, if her show is called While You’re Asleep, who actually watches it? Most of [REC], though, is thrillingly successful at assuring that sleep will be hard to come by after watching it.