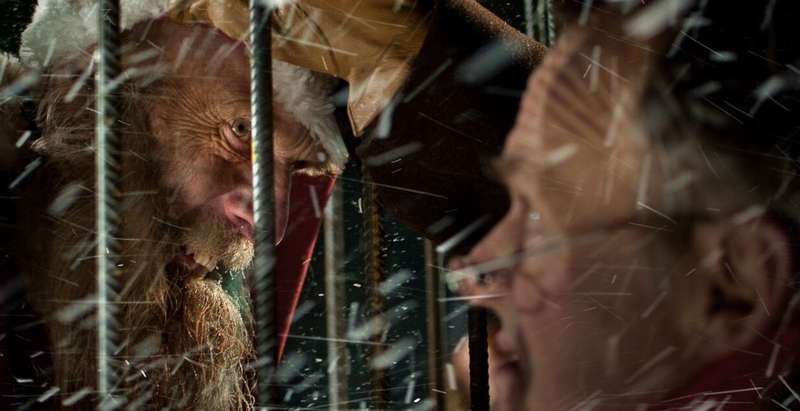 Editor's Note: This was originally published for FANGORIA on December 2, 2010 and we're proud to share it as part of The Gingold Files.

Going into Rare Exports: A Christmas Tale, you shouldn’t expect a typical killer-Santa movie. In fact, this Finnish production is not exactly a horror film, but more a spikily eccentric dark fantasy—one brought off with engaging imagination and impeccable craftsmanship.

Foremost among the movie’s achievements is the gorgeous cinematography by Mika Orasmaa, a deserving prize-winner (as was the film itself) at Spain’s Sitges festival. I have no idea whether Rare Exports had a sizable budget by European production standards, but it sure looks that way thanks to the eye-filling, crystal-clear vistas of Norwegian mountain ranges and deep, rich nighttime imagery. Writer/director Jalmari Helander’s story begins a couple of days before Christmas atop one of those peaks, where an American excavation company has discovered something mysterious and unexpected entombed within the rocks and ice. Once they’ve unearthed it, strange things start happening around the small town at the mountain’s foot, like the evisceration of the area reindeer—one of the first signs that Helander will not be holding traditional Yuletide signifiers sacred.

In fact, one of the village’s key businesses, now currently depressed, is a reindeer slaughterhouse run by Rauno (Jorma Tommila). Business is bad enough without some unknown predator thinning the local herd, so Rauno sets a pit trap to catch the culprit. What he and his friends soon find at the bottom isn’t what he expected—not a wolf, but an old, wizened man (Peeter Jakobi) with a big, bushy beard. Santa?

Well, if he is, he’s not the roly-poly figure of joy that generations of Americans are used to. Helander, who first introduced his alternate Claus mythology in a pair of Rare Exports short films, has a lot of fun fooling around with the character’s iconography, and how, say, a group of financially desperate men might react if they thought they had Saint Nick in their possession. Meanwhile, Rauno’s preteen son Pietari (Onni Tommila) and his friend Juuso (Ilmari Jarvenpaa) are discovering the truth behind their new visitor, and realizing that he’s just the, ahem, tip of the iceberg…

Rare Exports’ story is rather slight (the movie clocks in at a tight 78 minutes), but Helander, who also served as production designer, fills it out with lots of eccentric and spooky details, and gives it plenty of visual sweep. He has said that he didn’t intend the film for kids (if the dark-side-of-Santa material doesn’t traumatize little viewers, the roomful of naked men might), but he successfully captures a child’s-eye point of view and sense of wonder at the bizarre sights and events Pietari encounters. A sequence toward the end with the boy dangling from a helicopter is especially thrilling, and here as elsewhere, visual FX house Fake Graphics belies its name with striking digital contributions.

Although Rare Exports seeks to subvert the spirit of Christmas, Helander doesn’t take an ax to it; even with all the sinister stuff going on, it’s delivered with a wink and a vibe of good cheer, right up to the resolution. It’s a perfect bit of alternative holiday-season viewing, and one of those movies you’ll want to tell people you saw on first release once it becomes a cult film.