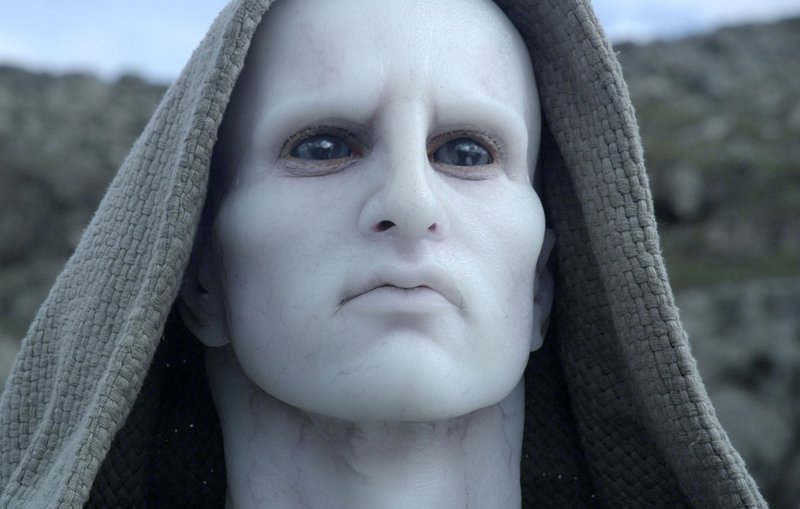 Editor's Note: This was originally published for FANGORIA on June 8, 2012, and we're proud to share it as part of The Gingold Files.

The early scenes of Ridley Scott’s Prometheus serve as an eye-filling reminder of how rarely we get big, serious movies about space travel these days. After a string of films in which aliens have brought the fight to us (with decidedly mixed results), here’s one that honors the grandeur and potential terror of exploring “the final frontier.”

It’s also a reminder that while any director can throw a lot of epic images on screen when given the right budget, Scott is one of those few who can truly immerse you in an environment—even without 3D, though the dimensional work in Prometheus stands alongside Avatar and Hugo as the form’s best. Before we get to outer space, an Earthbound prologue whisks us through awe-inspiring, foreboding locations to a setpiece establishing that the storyline will be concerned with nothing less than the creation of the human species itself. If Prometheus proves not quite up to answering all the questions and fulfilling the challenges it poses for itself, it makes the trip an absorbing and occasionally terrifying one.

When the story (scripted by Jon Spaihts and Damon Lindelof) first leaves Earth, we glimpse the titular vessel as a tiny blip of light against a vast starfield—an inversion of the opening shots of Star Wars and Scott’s own Alien, which aimed to impress with the awesomeness of their spacecraft rather than that of the celestial environments in which they traveled. The Alien echoes continue once we’re taken inside the Prometheus, as the camera drifts through hi-tech hallways while the crew dozes in hypersleep. The difference this time is, one of them is “awake”: an android named David, played by Michael Fassbender in the film’s most interesting performance. Tasked with taking care of the ship’s operations during its two-year-plus journey, David spends his copious free time brushing up on his basketball and linguistic skills—the latter of which will come in handy should the crew discover the evidence of alien civilization they’re seeking.

For that is the purpose of the mission headed by scientists Elizabeth Shaw (Noomi Rapace) and Charlie Holloway (Logan Marshall-Green), for whom identical hieroglyphics discovered across the world have pointed to the stars as the source of our creation. Romantically involved, Shaw and Holloway are at odds in terms of their belief systems: She’s fully convinced that humans were spawned from a higher power, while he maintains a position of scientific skepticism, occasioning debate between themselves and the other crew that sometimes tends toward the heavy-handed. Also on board the Prometheus are by-the-book Captain Janek (Idris Elba); Vickers (Charlize Theron), a representative of the Weyland Corporation that’s sponsoring the trip, who’s severe enough in her dress, coif and attitude that she might as well be an android herself; and assorted sci-techies, of whom the most prominent by virtue of being a loudmouth is Fifield (Sean Harris in the Bill Paxton role).

A good deal of the excitement surrounding Prometheus, of course, has concerned its status as an Alien prequel—or, as its creators have put it, a film with “Alien DNA.” That’s an apt term to use given the subject matter, and there’s quite a bit of the same eerie atmosphere here as in Scott’s 1979 classic—though the Prometheus is conspicuously higher-tech than Alien’s Nostromo. (There is justification in the fact that the Nostromo was supposed to be a working-class vessel, while the Prometheus’ trek has been bankrolled to the tune of a trillion dollars by Peter Weyland, played by a briefly seen Guy Pearce under heavy old-age makeup.) Once Shaw et al. arrive at the distant moon LV-223 and venture into its bowels, production designer Arthur Max takes ample cues from H.R. Giger’s landmark designs while bringing a fresh perspective, suggesting a higher intelligence behind the structures the team discovers.

Thus, it’s a tad disappointing that as its narrative progresses, Prometheus becomes less concerned with following through on its concerns of humanity and creation and goes more for straightforward sci-fi thrills. On that level, it’s a mightily accomplished piece of work, and even though some of LV-223’s denizens are inevitably digital creations as opposed to Alien’s slimily practical mockups, Scott wrings a visceral charge out of their interactions with the humans. One scene in particular, a melding of body horror, mechanical horror and personal horror, is easily the most powerfully frightening setpiece to appear in a major film (or any film) in quite some time.

Scott and Fassbender also build a running tension through David, playing off our memories of Alien’s duplicitous robot Ash. David appears to be devoted, smart, untouched by the foibles and personal concerns that might cause trouble among his flesh-and-blood crewmates, but does he have his own agenda—or has he been programmed with one by others? Fassbender plays this all beautifully, his serene hyper-humanity contrasting nicely with Rapace’s earthy turn as Shaw. Even as the story turns draw the character toward becoming the new Ripley, Rapace invests her with an intellectual curiosity, fierce determinism and drive to survive that’s all her own. Theron brings an effective cool to Vickers (counterpointing her voracious presence in Snow White and the Huntsman), while Elba doesn’t have quite enough to do and Marshall-Green seems simply outmatched in his scenes with Rapace and Fassbender.

On a craft level, Prometheus is peerless, with major props to cinematographer Dariusz Wolski, Max, visual FX supervisor Richard Stammers and the sound team for doing what all good science fiction should: making you fully believe in the world they’ve imagined, and feeling like you’re right alongside the characters exploring it. If the eventual destination falls back on sci-fi/action conventions rather than fully engaging the ideas posed in the film’s first half, Prometheus remains a voyage well worth taking.