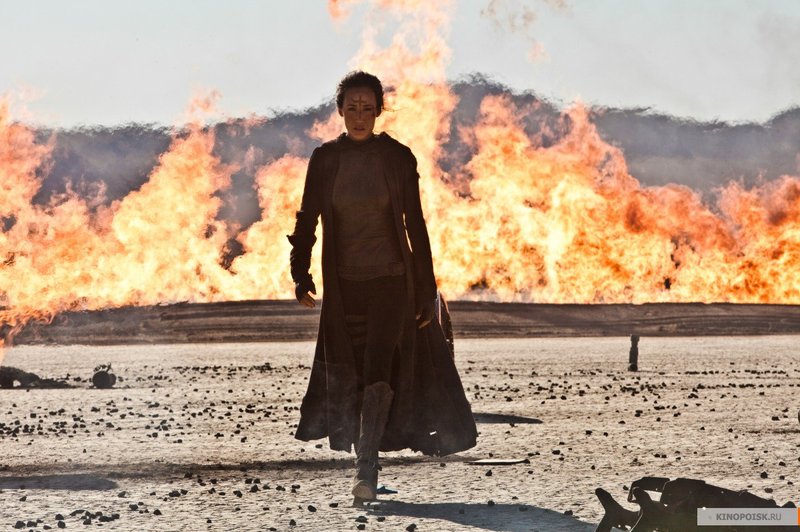 Editor's Note: This was originally published for FANGORIA on May 13, 2011, and we're proud to share it as part of The Gingold Files.

Priest opens with an animated sequence by Samurai Jack/Clone Wars’ Genndy Tartakovsky that cleanly and succinctly establishes the backstory, delivers some striking moments and looks really cool in 3D. It’s good enough that, not long into the movie, you may start wishing the whole thing had been done that way.

Actually, the 3D throughout Priest comes off very well for a conversion job, with none of the visual shakiness of prior examples and an atmospheric sense of space granted to both its dystopian cityscapes and cavernous vampire lairs. Too bad there’s not as much depth to the story. As recounted in that prologue, mankind on this alternate world once fought a catastrophic battle with inhuman, bloodsucking creatures that only ended when the ruling Church trained selected individuals as Priests—warriors with tattooed face crosses and fighting skills sufficient to defeat the enemy. The monsters were confined to reservations (allegory, anyone?) while most of humanity dwells, as the film proper begins, in walled cities governed with an iron hand by the Church and existing under perpetual dark clouds. (That’s not meant metaphorically; there’s a literal dark cloud constantly hovering over the metropolis where part of Priest takes place.)

There’s no place for the Priests in this supposedly safe society, so they’ve been reduced to manual labor. But one of them, played by Paul Bettany, is summoned back into action when his young niece Lucy (played by Lily Collins, Phil’s daughter) is kidnapped by the vamps from a remote outpost. Priest is warned not to set off on any kind of vigilante rescue mission (as he and the audience are reminded three times, “To go against the Church is to go against God”), but out he rides into the desert, on a motorcycle bearing all kinds of computerized gadgetry that makes you wonder why so much of the rest of the technology on view is so lower-tech.

The tech gets ever lower as Priest’s adventures continue, as this is yet another film incorporating classic Western tropes in a fantasy setting. Outside the city, the production design suddenly becomes more Sergio Leone than Ridley Scott, and Bettany even adopts a Clint Eastwood-esque growl at times as Priest teams up with local sheriff/Lucy’s boyfriend Hicks (Cam Gigandet) to rescue his niece. But director Scott Stewart (who previously teamed with Bettany on another clerical/supernatural thriller, Legion) and screenwriter Cory Goodman (working from the graphic novels by Min-woo Hyung) show little interest in riffing or expanding on sagebrush standards, to the point where the lead villain (portrayed by an underused Karl Urban) is defined largely by his black hat and is even called Black Hat. This baddie’s conveyance of choice is a train, but he might’ve done well to choose a faster vehicle, since at a crucial point in the story, Priest and co. are able to catch up with it on their motorcycles despite Black Hat having at least half a day’s head start.

Priest’s team also includes Priestess (Maggie Q), one of four of Priest’s former compadres who are called on to hunt him down. (No one ever addresses any of these folks as anything but “Priest,” leaving one to wonder how you’d get one of their group’s attention if a bunch of them were in the same room.) She’s faithful to Priest, however, thanks to some sort of history that’s alluded to but, like so much else in this 87-minute movie (including seven minutes of end titles), is dramatically glossed over so the next action scene can be arrived at. Some of that action is well-staged, and as in other 3D genre films, Cuisinart editing and shaky-cam moves have been eschewed to avoid audience eyestrain. But the utterly generic context cuts down the impact of the fighting and chasing, and Priest, whose release date has been shifted a few times, has the bad luck to be opening in the direct wake of Fast Five, whose key train-centered setpiece puts the one in this movie to shame. As for the monsters, while they’re nicely rendered in CGI, there’s no variety or personality to them, so their attacks quickly begin suffering from sameness.

Bettany has presence in the title role, to be sure, and demonstrates a belief in it that keeps him credible even when his dialogue drops into cliché territory. Q does well enough in her limited part to make you want to see more of her, while Gigandet earnestly plays a character who’s described by someone as a “hard case,” but was evidently aged down to keep his romantic interest in the 18-year-old Lucy seeming appropriate. Brad Dourif doesn’t have enough to do as a snake-oil salesman named Honest John, and the same goes for True Blood’s Stephen Moyer and Mädchen Amick (remember her?) as Lucy’s parents. While equally briefly seen, Christopher Plummer nonetheless brings his effortless superiority to the role of Priest’s disapproving Monsignor. He’s confronted with the error of his thinking during the final scenes, which very blatantly set Priest up as a franchise-starter, which it could have been if it had truly engaged and done more creative things with its basic ideas and themes. But all I could think, during the many occasions the movie gave my mind to wander, was how much better Stake Land did a religion-tinged vampire/survival story at about 1/50th the budget.