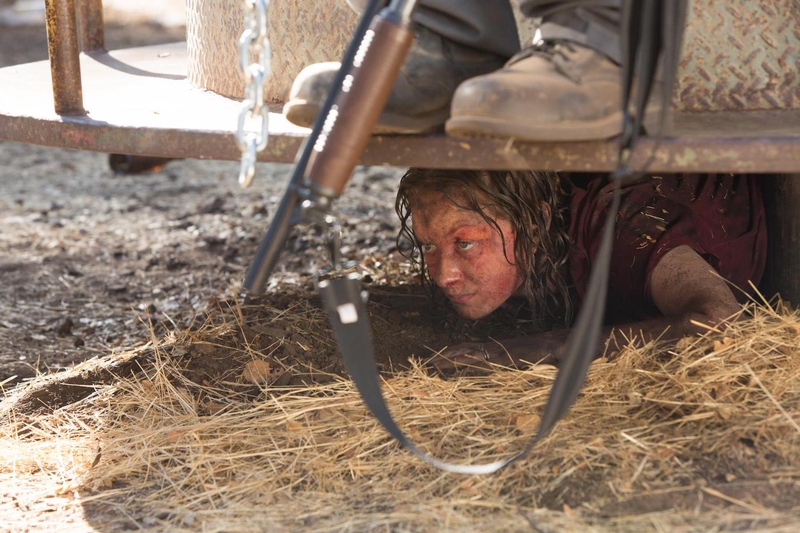 Editor's Note: This was originally published for FANGORIA on August 5, 2014, and we're proud to share it as part of The Gingold Files.

So many cell phones have failed to get reception in horror movies that it’s refreshing to see one in which the characters can make and receive calls from their remote, isolated environs. And Preservation goes even further to make dependence on electronic communication part of its plot and point.

Writer/director Christopher Denham is somewhat more successful in the former goal, where it helps amplify the tension, than in the latter, in which the message becomes a little too on-the-nose. Having previously exploited the ubiquity of personal video as a horrific narrative device in his 2008 found-footage creeper Home Movie, Denham once again focuses on a handful of characters, this time in the wide open spaces rather than around the house. Preservation (making its international premiere at Montreal’s Fantasia festival) opens with brothers Sean and Mike Neary (Pablo Schreiber and Aaron Staton) apparently headed for a guys’ weekend away in the California mountains.

Only after we get to know the bros a bit does Denham pointedly cut to the back seat, revealing that Mike’s wife Wit (Wrenn Schmidt) is also along on the trip. As the trio park their vehicle and venture into the forest—into a preserve area that’s closed for the season—we learn that there’s a growing distance between Mike and Wit, in no small part because hedge-fund manager Mike is so addicted to his job that he can’t put his cell phone away as they hike toward their destination. That leaves her open to the alpha-male attentions of Sean, a Marine recently returned from overseas action—though when she’s convinced to join them in picking up a rifle, she can’t bring herself to take down a deer at a crucial moment. Needless to say, her reluctance to let the killer instinct take over will be tested before too long.

Denham builds up to his story’s turn into thriller territory slowly and stealthily, dropping a couple of hints—missed by his protagonists—that they’re walking into danger. Then, after their first night, they awaken to find themselves literally marked for death by an unseen assailant or assailants, the hardware (technological and otherwise) with which they could protect themselves or seek help now gone. Stripped of their wireless lifelines, the trio have to get past their previous estrangements to find their way to safety, and the time Denham has spent allowing us to get to know them pays off, as their authentic and well-acted sense of shared history has us rooting for them to survive—and perhaps turn the tables on their sadistic, heavily armed stalkers.

Denham also makes good use of his remote locations, choreographing a series of tense pursuits and confrontations in settings that carry an unnerving atmosphere of isolation even though most of the action takes place in the daylight. The filmmaker knows how to prey on the basic fear of being lost in the woods that has fueled many past movies, including The Blair Witch Project and its ilk, only here the threat is not supernatural, or even superhuman. The more we see of the attackers, the clearer the banality of their evil becomes, and their own obeisance to electronic devices feeds into Denham’s overall point.

When it comes to the villains, that statement has been made before, and there are moments where Preservation becomes too obvious in its attempts to tie their violence to technological influence. In the final act, Denham strains a little too hard to convey his message at the expense of plausibility—though he does wring moments of darkly satiric humor out of their physical fallibility even given the advantages their accoutrements allow them. That humor is disarming, yet doesn’t dispel the urgency of the situation, and Preservation largely succeeds as a swift and scary survival thriller.