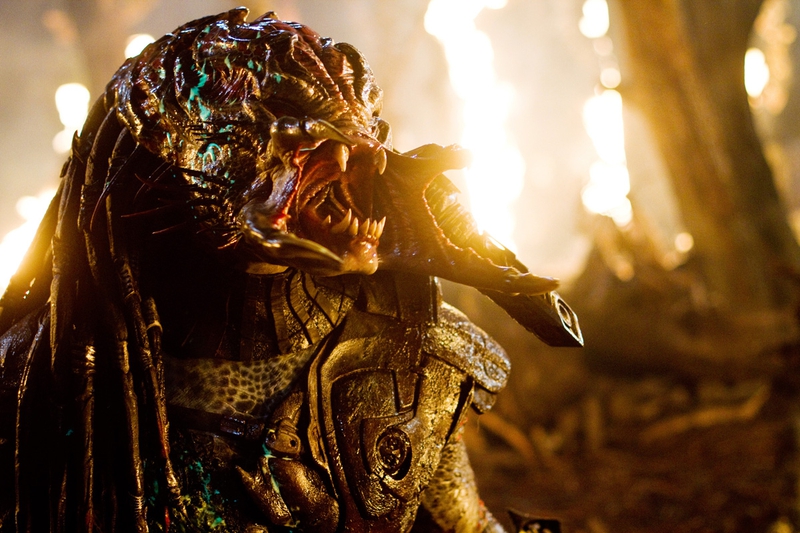 Editor's Note: This was originally published for FANGORIA on July 9, 2010, and we're proud to share it as part of The Gingold Files.

When a movie is titled Predators as opposed to Predator, the way Aliens followed up Alien, you’d expect there’d be a lot more of the titular beasts on screen. But the new reboot/reimagining/whatever you want to call it of the alien-hunter franchise feels like it actually contains less Predator action than the original. And it doesn’t do so well by its humans either.

The basic term “remake” actually applies best here, since Predators adds little in the way of development or novelty to the ideas first broached in the 1987 Arnold Schwarzenegger vehicle. The premise and its development are pretty much the same, only with the setup reversed; instead of ol’ mandible-face tracking humans on our turf, a group of the creatures have imported a selection of Earth’s most dangerous denizens and deposited them on a game-preserve planet that looks quite like the jungles of Hawaii, except for the sun that doesn’t move (until it’s time for some nighttime atmosphere, of course). The film opens with a bang, as Adrien Brody, playing a merc who isn’t named (Royce) until the last reel, wakes up in freefall, tumbling through the sky before a self-activating parachute allows him to land roughly but safely.

Before he can even get his bearings, he’s joined by a carefully assembled multiculti group (plus the remains of one guy whose parachute didn’t deploy, and under the circumstances can be said to have gotten off easy). There’s an Israeli sniper (Alice Braga); a Russian (Oleg Taktarov) who appears to be toting Jesse Ventura’s handheld Gatling gun from the ’87 film; a Baja drug enforcer (Danny Trejo); a Yakuza killer in a grey suit (Louis Ozawa Changchien); a Sierra Leone death squad member (Mahershalalhashbaz Ali); plus two white guys, a smirking serial killer (Walton Goggins) and a doctor (Topher Grace) whose presence seems incongruous, and it helps not to think about that too much if you want to preserve one of the story’s few surprises. Most of them are already armed with heavy-duty weapons, and it doesn’t take long for them to realize what they’re doing there, though it is a while before they realize the true nature of what’s hunting them.

In other words, it’s a good long time before the Predators make their appearance, as if the powers that be believed that in relaunching the franchise, they should ignore the legions of fans who already know what the monsters look like. There’s nothing wrong with building a sense of mystery and anticipation, of course, but the script by Alex Litvak and Michael Finch doesn’t offer much to fill in the down time. The characters are barely developed beyond thumbnail sketches, the action is familiar from a dozen other run-through-the-jungle pics and the dialogue is boilerplate, except when Royce says, “Certainly there is no hunting like the hunting of man and those who have hunted armed men long enough and liked it, never really care for anything else thereafter” (which is derived from Hemingway) and Goggins’ loony talk about how he wants to get back to Earth and “rape some bitches” (which is not).

But when he isn’t being Mr. Misogynist, this crazy delivers something the first Predator had in spades, and Predators is severely wanting: a sense of fun. From the early close-up of the bulging-biceps handshake between Schwarzenegger and Carl Weathers, it was clear that all involved in the ’87 film knew they were crafting a piece of high-cost pulp, and were determined to push it to the nth degree and give the audience a great time. Much of Predators is played with deadly seriousness, and while director Nimrod Antal (of the superior snuff thriller Vacancy) delivers cleanly staged action and occasional tense moments, the material is too sketchy for a true sense of terror to take hold. Only when Laurence Fishburne turns up halfway through the movie (his entrance is the movie’s best scene) to offer exposition and a lesson in bad-assery does Predators suggest a mischievous smile beneath the surface of its grindingly generic scenario. Fishburne isn’t on screen long enough, and soon it’s back to more running through the trees and alien-constructed corridors, with the hunted falling victim in about the order you expect them to.

Buffed up and dropping his voice a few octaves to Clint Eastwood—or Christian Bale—level, Brody does well enough as a thoughtful tough guy, and everyone else fills their limited roles just fine (though Trejo fans may be distressed to note that he seems to have less dialogue here than in the attached Machete trailer). When the Predators finally show their ugly mugs, KNB EFX’s creature work both honors and pulls interesting riffs on the original Stan Winston designs and creations. Overall, the movie looks and sounds great, albeit just like a dozen other movies of its type that you’ve seen in the last few years. Surely, 23 years (has it really been 23 years?) since Schwarzenegger and the Predator first went mano a mano, the new creative team could have come up with more interesting variations on the scenario than are on view here.