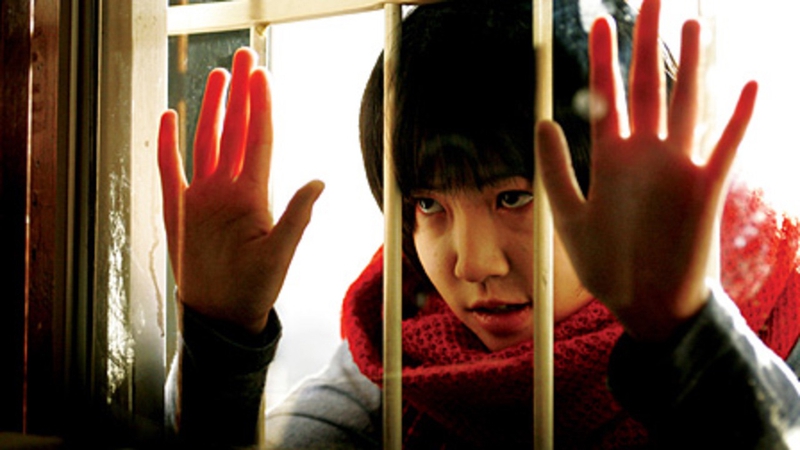 Editor's Note: This was originally published for FANGORIA on April 27, 2010, and we're proud to share it as part of The Gingold Files.

The idea of an Asian horror film called Possessed calls up all sorts of unpromising and generic associations, but the new Korean chiller of that title (currently playing the Tribeca Film Festival) has more to offer than the expected evil-imbued girl with long dark hair. Lee Yong-joo’s directorial debut works some intriguing wrinkles into the expected formula that give it an edge over the many previous features of its kind.

Our heroine is a young woman named Hee-jin (Nam Sang-mi), who receives a strange, unsettling and abruptly truncated phone call from her younger sister So-jin (Shim Eun-kyung from Hansel & Gretel) in the middle of the night. The next day, the girl has gone missing, and Hee-jin discovers that their mother (Kim Bo-yeon), a rabidly devout Christian, hasn’t called the cops, believing that prayer is the only answer to the situation. Hee-jin doesn’t agree, and soon Detective Tae-hwan (Ryu Seung-yong) is on the case. He initially believes So-jin has simply run away, but Hee-jin knows better—particularly when she witnesses a woman who lives in the same building hanging herself off the roof. Watching the woman’s struggles before she plunges to the parking lot, Hee-jin is convinced this was not a suicide, and that the victim was actually fighting to live.

As Hee-jin continues to try to track down her missing sibling, Lee splits the focus between her and Tae-hwan’s own investigation, as both gradually discover that there’s more to the situation than meets the eye. And there’s more to the movie, too; rather than a typical story of demonic possession and the efforts to rid the afflicted individual of the malignant spirit, Possessed focuses on the behavior of those around her, as we meet more of the occupants of the apartment building, including the local shaman. The place seems to be a haven for troubled souls, and some of the strongest drama derives not from the actions of the inhabited girl but the reactions and emotional torment she brings out in others.

Lee indulges in a few familiar genre tricks—like an ominous shape behind a half-opaque glass door that turns out to be a hanging shirt—but also knows how to stage a good jolt, and pulls off a few genuine seat-jumpers. Mostly, though, his emphasis is on slow-building tension, and in creating a sense of unease by staging uncanny events in familiar environments. There aren’t a lot of makeup FX or flashy digital tricks in Possessed, but the director successfully establishes the reality of the settings and the people dwelling within them to the point where only a modest occult flourish is necessary to give the audience a chill. While working the expected tension from the at first disbelieving Hee-jin’s realization of the paranormal forces at work (not to mention Tae-hwan’s own, occasionally violent skepticism), Lee makes religious conflict a key element as well, as both her mom’s Christianity and the neighbors’ locally based beliefs become exaggerated and manipulated to unfortunate ends.

In telling his emotionally complex story, Lee employs a time-jumping narrative structure that’s occasionally confusing, but everything falls into place as he springs his last-act twists on the way to a melancholy ending. Possessed may be coming late in the cycle of K-, HK- and J-horror movies involving young women and dark forces, but it demonstrates that such films can still work when the filmmaker puts the emphasis on the people as much as on the deviltry.