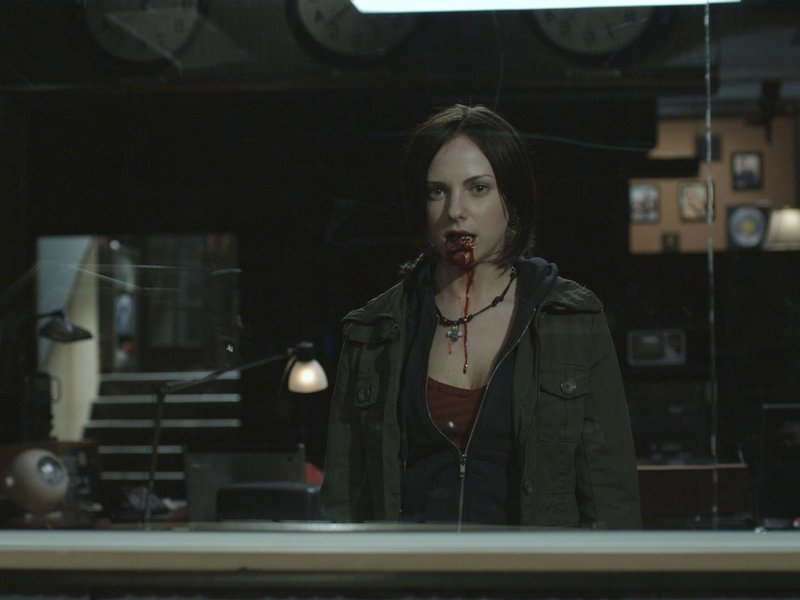 Editor's Note: This was originally published for FANGORIA on May 29, 2009, and we're proud to share it as part of The Gingold Files.

Whether they stagger slowly or dash madly, the one constant among cinematic zombies though the years has been that they don’t say much. They moan a lot, and occasionally manage a hungry “Braaaains!” but articulated speech has escaped them. Which means that Bruce McDonald’s Pontypool is unique via its very premise: an undead plague in which both the cause and the symptom are spoken words.

And what better place to set such a story than a radio station? Corbin Bernsen’s upcoming Dead Air takes the same tack, but it’s especially appropriate for a movie whose characters might be victimized by the verbal communication they depend on. The central figure (you can’t quite call him a “hero”) is Grant Mazzy (Stephen McHattie), a former big-city shock jock now relegated to the morning gig on the local channel in the titular tiny town. Without much to report on, Mazzy spends his time on the air ranting about whatever subject piques his interest (or, more typically, his ire). His only companions are his ever-flustered producer, Sydney (Lisa Houle, McHattie’s real-life wife), and his engineer, Laurel Ann (Georgina Reilly). As the movie opens early on Valentine’s Day morning, everything seems like business as usual—except for the woman who accosts Mazzy’s car as he’s on his way to work.

Once he starts broadcasting, his usual routine becomes interrupted by reports of strange things going on in Pontypool. A remote reporter, who typically does fake “helicopter coverage” of area traffic, calls in with eyewitness bulletins of increasingly strange behavior. It seems the populace has been overtaken by a strange sickness that causes them to obsessively mutter—and attack others with bloodthirsty intent. The more Mazzy, Sydney and Laurel Ann hear, the more alarmed they become—and they realize their little radio HQ (located in a church basement, no less) may be the only refuge from the growing madness outside.

Adapted by Tony Burgess from his novel Pontypool Changes Everything, the movie is a clever and spooky variation on the well-worn characters-trapped-in-a-confined-space-by-the-undead scenario. Here, audience identification with the protagonists is intensified by the fact that we only find out as much about the increasingly dire situation as they do—there are no cuts outside to show the bigger picture—and there are a number of marvelously suggestive moments, particularly when it’s clear that outside reporter is getting too close to the story for his own good. The situation is claustrophobic, but not oppressively or redundantly so; McDonald’s shot choices are varied enough to maintain visual interest within the sole central location, and the cinematography by Land of the Dead’s Miroslaw Baszak manages to convey a sense of nighttime-esque atmosphere even though the events actually take place during the day.

At the center of it all is McHattie, a longtime character actor taking full advantage of the opportunity to sink his teeth into a leading role. With his marvelously lined face and Don Imus-esque delivery, he’s perfect as a guy who likes to act like he’s seen and heard it all, only to be confronted by a scenario he absolutely hasn’t. Houle and Reilly offer solid support, and there’s a colorful turn by Hrant Alianak as a doctor who somehow finds his way into the station in the midst of the chaos and offers explanations for what’s going on.

These discussions of language, its uses and meanings, how it both spreads and expresses the disease and how the characters might apply it to protect themselves tend toward the long-winded as Pontypool goes on. Its intellectual quirkiness does help set this film apart from its many, many predecessors in the subgenre, but like its afflicted folks who become fatally fixated on a particular phrase, the movie begins repeating itself as it closes in on the home stretch. Fortunately, there’s still enough tension and mayhem in the third act for Pontypool to maintain its grip, right up till a closing moment that’s not entirely satisfying. Bear with its uneven moments, though, and you’ll find this to be a movie that’ll keep you talking too for a while after it’s over.