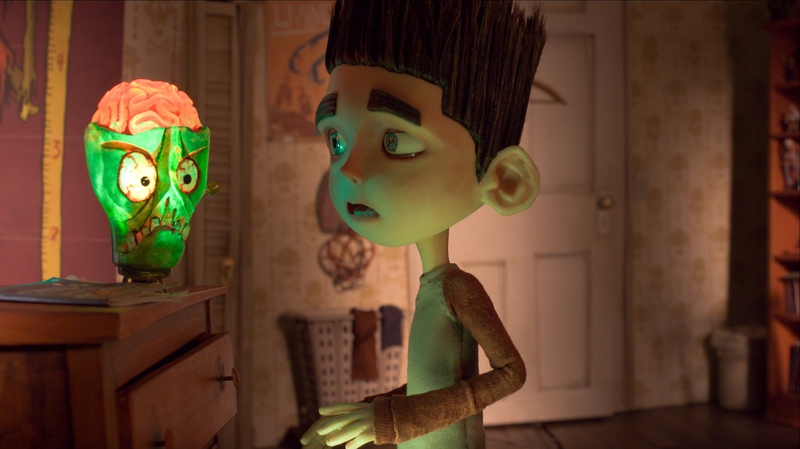 Editor's Note: This was originally published for FANGORIA on August 3, 2012, and we're proud to share it as part of The Gingold Files.

If there’s any more proof needed that the undead have conquered the mass media, here it is: The year’s best animated movie has zombies in it.

Note that I used that phrasing instead of describing ParaNorman (screening at Montreal’s Fantasia festival ahead of its wide release) as “a zombie movie.” That’s because the walking corpses, while a key element of the film, are just part of a wider storytelling tapestry that encompasses a bunch of the big themes of horror, and pitches them at a level kids can fully enjoy and appreciate while being clever and imaginative enough for adults. ParaNorman is truly a movie for all ages, offering enough to sate grown-up horror buffs while it is likely to become the biggest genre gateway drug for budding little fright fans since The Nightmare Before Christmas.

Like Henry Selick and Tim Burton’s modern classic, ParaNorman brings its characters to life (and other conditions) through the magic of stop-motion, a process that isn’t used enough in features these days, filmed in atmosphere-enhancing 3D. Anyone old enough to be nostalgic about this kind of model animation will especially appreciate the opening scene, which proves it is possible to be charmingly retro and technically state-of-the-art at once. We’re then introduced to Norman Babcock (voiced by Kodi Smit-McPhee), a young boy who lives in the town of Blithe Hollow, where the activities and businesses bespeak a preoccupation with witches.

Yet Norman’s possession of an actual occult ability—he can see and speak with the local ghosts—makes him an outcast among his schoolmates and the odd boy out amongst his family. His best friends are among the deceased that he and we see as translucent green specters, and whom he jokes with on the way to school (including a “How’s it hangin’?” joke perhaps inspired by yet different from the one in the director’s cut of the similarly themed The Frighteners). Norman’s one living pal is Neil (exuberantly played by Tucker Albrizzi), a chubby kid who doesn’t let his misfit status get him down. And Norman’s going to need all the help he can get from the living and the dead when he begins having visions of evil encroaching on Blithe Hollow, fulfilling a centuries-old curse that manifests in the living dead stalking out of a nearby cemetery.

Smit-McPhee, who previously dealt more sympathetically with the undead in Let Me In, gives a vocal performance as multidimensional as his onscreen alter ego, and his efforts are supported by a first-rate cast of established actors, in some cases playing against type. Anna Kendrick, generally a model of self-possessed intelligence on screen, is perfect as Norman’s ditzy cheerleader sister Courtney, who goes along on his quest to save their town in part to pursue her crush on Neil’s meathead jock brother Mitch (Casey Affleck), while perpetual screen geek Christopher Mintz-Plasse voices dimwit bully Alvin. (It should be noted that despite being a ditz, a meathead and a dimwit, none of these characters become so dumb that they cease being endearing.) Perennial genre girl Jodelle Ferland does a fine turn as Aggie, a child who becomes crucial to the action, while among the adults, John Goodman has lots of fun as Norman’s strange great-uncle Prenderghast and Elaine Stritch brings welcome vinegar to the only eccentric-grandma role these days not played by Betty White.

This first-rate aural ensemble is matched by the visuals overseen by directors Chris Butler—who also scripted—and Sam Fell, the former a veteran of the stop-motion Gothics Coraline (from the same producing team) and Corpse Bride. ParaNorman takes a different visual tack, emphasizing morbidly lush colors and lighting that, like the frequent in-jokes and references lurking in the margins (a briefly seen tombstone pointedly indicates that one zombie is named Hopkins), make it clear that the two creators are bona fide genre fans. All the figurative colors of horror are on view too, from creeping suspense to body-part slapstick to a ghoul-fueled car-action setpiece as thrilling as anything in a live-action blockbuster. Throughout, the animation itself is fluid, imaginative and wonderfully detailed, and the 3D adds to the impact, whether adding spooky layers to the settings or allowing gnarled hands and other harmful implements to poke the audience in the eye.

Obviously, that doesn’t literally happen to anyone in ParaNorman; Lucio Fulci-level stop-motion splatter will have to be left to another movie. What Butler and Fell do so well is to utilize the undead as part of a greater storytelling purpose, one that harks back to the classic traditions of misunderstood monsters. There’s a moment when the zombie conflict seems to be getting resolved too easily—but that’s just the filmmakers setting up the real point of their story, which leads to a final act marrying heartfelt emotion and eye-popping, thrilling spectacle in which one never overwhelms the other. No mere “kids’ flick,” ParaNorman is a true feast of a movie, visual and otherwise.