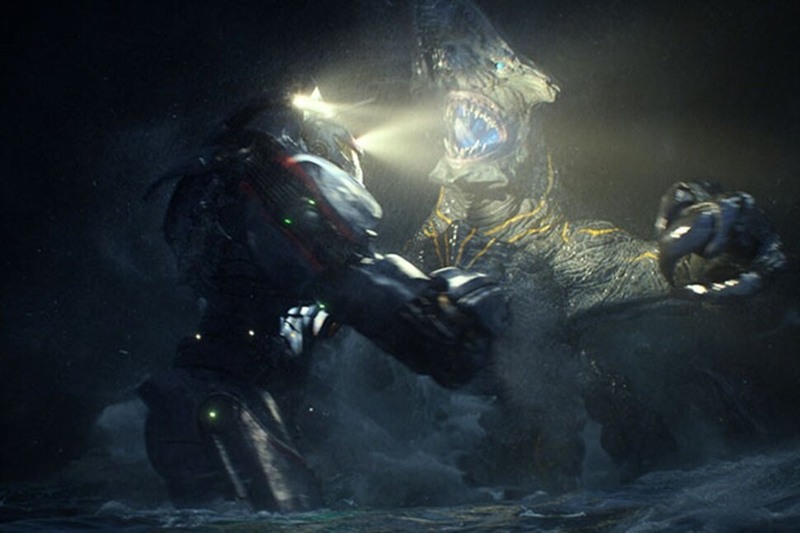 Editor's Note: This was originally published for FANGORIA on July 10, 2013, and we're proud to share it as part of The Gingold Files.

In this era when big summer FX spectacles seem to be produced by accountants as often as filmmakers, the news that Guillermo del Toro, who has brought more soul to genre cinema than anyone else in the 2000s, was tackling a monsters-vs.-robots epic was cause for celebration. And now that Pacific Rim has arrived, it puts del Toro in the odd position of having outdone everyone but himself.

Pacific Rim represents del Toro cracking open a $200-million toybox and spilling his love for giant-monster movies all over 131 minutes of breathlessly paced running time. This is what Roland Emmerich’s clueless Godzilla remake and Michael Bay’s mind-numbing Transformers movies wanted to be—a go-for-broke spectacle applying the very latest in digital FX technology to the old-fashioned city-smashing thrills of the Toho favorites from the ’50s-’70s. It even adopts the Japanese term “Kaiju” for its creatures, which begin to emerge from a rift on the floor of the Pacific Ocean sometime in the mid-2010s and trash coastal cities. When conventional weaponry, in time-honored tradition, proves ineffective, the nations of the world put aside their differences and join forces to create the ultimate counterattack: 25-story, human-driven robots called Jaegers, named after the German word for “hunters” (though their pilots, sadly, are not known as Jaegermeisters).

Furthering the movie’s theme of teamwork, each Jaeger must be guided by two people, whose left and right brains combine to control the robots’ actions. Thus it helps if the duo are related, like brothers Raleigh (Charlie Hunnam) and Yancy (Diego Klattenhoff), hotshots who, in their Jaeger known as “Gipsy Danger,” take on one of the monsters off the Alaskan coast in an early sequence that sets the tone for the titanic, no-holds-barred battles to come. (Also wet; practically every fight is staged either in rain or above or below the surface of the ocean.) Del Toro and his large team of designers have gone nuts conceiving the mammoth adversaries; rather than the recognizably reptilian/insectoid beasts comprising most of Toho’s rogue’s gallery, these Kaiju seem more inspired by the wacked-out critters from Daiei’s Gamera films. One early terror, known as Knifehead, seems directly influenced by the giant turtle’s foe Guiron.

The beasts keep evolving to the point where they prove a match or more for the Jaegers, and the bulk of Pacific Rim is set several years into their invasion, when the remaining members of the Pan Pacific Defense Force are gearing up for one last major offensive against the Kaiju. Leading the charge is commander Stacker Pentecost (Idris Elba), who has been serving as mentor to Mako Mori (Rinko Kikuchi), a young woman who’s clearly got the chops to be a Jaeger pilot but whom Pentecost is protectively holding back. Also on the team are Australian father and son Herc (Max Martini) and Chuck Hansen (Rob Kazinsky), the latter of whom takes an instant dislike to Raleigh when Pentecost brings the latter back into the PPDF fold after a long period out of service. Needless to say, our protagonists are going to have to learn to trust, depend on and perhaps even make sacrifices for each other if humanity is to prevail.

If it sounds like the script by Travis Beacham and del Toro is cut from the same cloth as a hundred other military sagas—well, that’s pretty much the case. The human drama travels along a route that’s easy to predict once the basics are established, and Pacific Rim lacks the poetry and deep humanity that has suffused del Toro’s previous work, not just in the personal stuff like Pan’s Labyrinth and The Devil’s Backbone but in his Hellboy epics as well. The entire cast attack their roles with conviction, with Hunnam a solid lead and Elba providing some stirring moments, though one wishes along the way for a little more surprise or shading to the characters—especially Chuck, whose succinct onscreen description as “an obnoxious jerk with a daddy complex” is pretty much all there is to him. The more interesting folks are in the margins: Drs. Newton Geiszler (Charlie Day) and Hermann Gottlieb (Burn Gorman, who resembles the love child of Crispin Glover and Lee Evans), squabbling scientists working on different solutions to the Kaiju crisis, and Hannibal Chau (del Toro fave Ron Perlman), a black-market trader in monster organs operating out of a hidden Hong Kong HQ.

That den is one of the many eye-popping settings del Toro takes us to in the course of Pacific Rim, and the production design by Andrew Neskoromny and frequent David Cronenberg collaborator Carol Spier is one of its very best assets. Even at their most fanciful, the sets all ring with reality; everything looks convincingly worn, fully functional, aesthetically right. No doubt many of them were augmented with CGI, but that doesn’t enter the mind while watching since the digital FX, supervised by John Knoll, James E. Price and Hal Hickel, are seamless—utterly convincing whether a workman is sliding down the skeleton of a building under construction or the Jaegers and Kaiju are using each other as punching bags. And while del Toro-regular DP Guillermo Navarro suffuses much of the action in dramatic shadows and darkness, the 3D is as crisp and immersive as any seen in live-action features in the last several years—definitely worth the price of a ticket upcharge.

Indeed, this is one summer megapicture where every penny is up on the screen, and the ambition to deliver a kick-ass spectacle has been fully realized. It’s just that for those who have loved and admired del Toro’s work over the past couple of decades, the lack of an emotional investment to equal the shock and awe is a tad disappointing. (The most moving passage occurs not during the main story, but during a flashback revealing Mako’s tragic past.) But perhaps that’s just grading on a curve formed by huge expectations. Certainly, the director’s eye for evocative, sometimes playful detail—seabirds flying from a dock or a Newton’s Cradle being knocked into action during the battles royale, for example—is still very much in evidence, and if Pacific Rim doesn’t represent the pinnacle of del Toro’s art, it’s a rousing demonstration of his craft.