Review: NO ONE LIVES 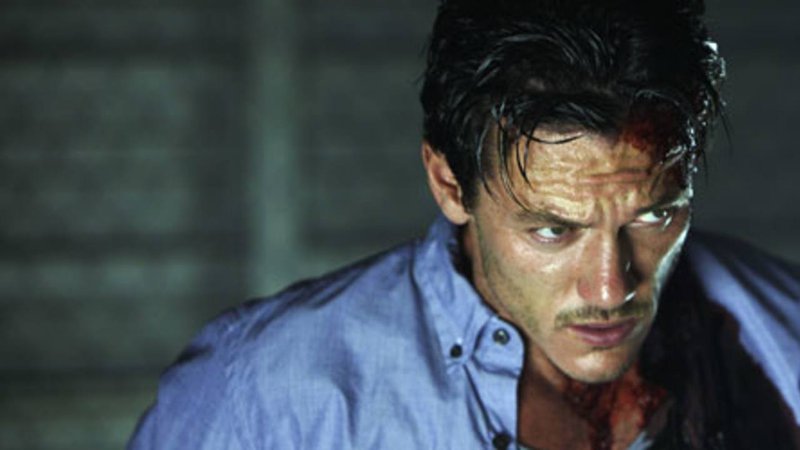 Editor's Note: This was originally published for FANGORIA on May 10, 2013, and we're proud to share it as part of The Gingold Files.

The title of No One Lives at first seems like a spoiler, but as the movie grinds on, it comes to feel like an inevitability, and eventually a blessing.

No One Lives is a fusion of horror and that subset of the crime genre that pits bad guys against badder guys and risks giving the audience no one to root for. That’s what happens here, despite an opening act that seems to delineate fairly clear heroes, heroines and villains. After a vigorous intro of a terrified girl, Emma (Silent Hill: Revelation’s Adelaide Clemens), running through the woods and almost but not quite making it to safety, we’re introduced to the handsome, enigmatic Driver (Luke Evans) and his traveling companion Betty (Laura Ramsey from The Ruins and others—nice to see her again), who are fated to have a run-in with criminal Hoag family (led by Lee Tergeson and Derek Magyar). We’ve seen the Hoags’ burglary of a fancy house interrupted by the owners, who wind up shotgunned, so it looks like bad news for the Driver and Betty when they all wind up at the same rural steakhouse. But the Driver is literally packing a couple of big surprises, which turns the scenario on its head and leads to a bloodbath at the Hoags’ remote house in the woods.

This first produced script by David Lawrence Cohen does manage to catch the viewer off guard a couple of times in No One Lives’ opening half hour. In addition to the aforementioned reversals, there’s a startling gore gag that—beyond the fact that WWE Studios co-produced the film—justifies the casting of enormous wrestler Brodus Clay (who we learn via the end credits is not just a performer but also a trademark of WWE). Watching this setpiece, die-hard slasher fans might suspect that Cohen has seen 1992’s minor maniac opus Dr. Giggles—but a would-be black-comic bit a little later on leaves no doubt that he’s seen the same year’s Reservoir Dogs.

And this is far from the only moment in No One Lives, unfortunately, that raises that suspicion, as the movie is full of the kind of arch, self-conscious dialogue that can be poetry when written and directed by the likes of Quentin Tarantino, but plays as ear-gratingly phony here. You don’t know whether to feel sorry for the cast or be impressed that they can keep straight faces during exchanges like, “A man who lacks emotion is sorry”; “I don’t lack emotion; I just process it differently,” and wannabe ominous pronouncements such as “You might want to drop the bad-guy routine. I’m your path to living and you seem to be bent on playing the dying game.” Late in the game, one of the baddies actually refers to the cops as “Johnny Law,” a term that probably hasn’t been spoken by anyone in several decades outside of wannabe-trendy genre movies.

No One Lives was directed by Ryuhei Kitamura, the Japanese enfant terrible behind Versus and Azumi who brought an overabundance of digitally assisted gimmickry to his previous U.S. film, The Midnight Meat Train, and probably should have done so here as well. Material this risible cries out to be hyperstylized, but some energetic camera moves aside, it’s played pretty much straightforwardly, with an abundance of gore (convincing work by Robert Hall and his Almost Human company) but little in the way of thrills. That’s because once the twists have been sprung and the basic situation established, what we’re left with is a scenario with no point of identification, just the spectacle of a relentless villain laying siege to a gang of scumbags who do little but fight amongst themselves and throw f-bombs at each other, while Clemens—who’s probably very happy to also have The Great Gatsby opening today—stands to one side making wannabe ominous pronouncements (see above).

No One Lives does have one thing going for it; it’s arriving in theaters ahead of You’re Next, which has a similar basic scenario, a couple of almost identical action scenes and a far better idea of how to engage its audience. Not to mention the good sense to center the action in its key setting throughout; straying afield in the last act of a siege movie always risks dissipating the tension, though by the time Kitamura and Cohen do it, many viewers will likely have long since stopped caring whether no one, or anyone, lives.