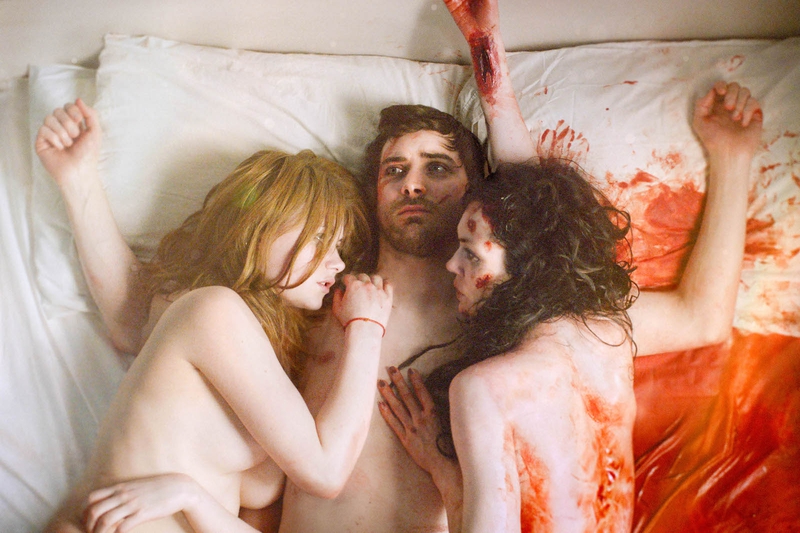 Editor's Note: This was originally published for FANGORIA on February 11, 2016, and we're proud to share it as part of The Gingold Files.

A situation that might have played like a horrific sitcom in other hands gets unusually sensitive yet still bloodsoaked treatment in Nina Forever, a very solid feature debut by British writer/directors Chris and Ben Blaine.

In addition to showcasing its filmmakers’ promise, Nina Forever also contains a trio of finely shaded performances enacting its unusual love triangle. The male side is Rob (Cian Barry), whose life has been shattered by the death of his girlfriend Nina in a car accident. Having attempted to take his own life, he has abandoned a promising academic career to take a job in a supermarket, where he attracts the attention of co-worker Holly (Abigail Hardingham). Recently dumped by her jerk of a boyfriend, Holly is in training as a paramedic, and in Rob finds a broken soul to minister to. An attraction sparks between them—but when they make love for the first time, the broken body of Nina (Fiona O’Shaughnessy) clambers out from under the sheets, literally unwilling to let Rob go.

The setup of a dead lover coming between their surviving squeeze and a new flame has fueled a number of past films (most recently Joe Dante’s Burying the Ex), but most of them have been pitched toward the outrageous/comical side. The Blaines are after something deeper, delivering a study of grief, loss and longing shrouded in the tenets of a grim horror/drama. That’s not to say there aren’t humorous moments, but they’re sporadic and grow out of natural human reactions to bloody unnatural situations. Mostly, Nina Forever zeroes in on the implications of its title (which Rob has tattooed on his back), as Holly and Rob struggle and deal with Nina’s reappearance in different ways.

At first, Holly accepts the possibilities of including Nina in her and Rob’s bedroom play; she’s eager to explore the dark side, having been dropped by that other beau for being “too vanilla.” Unfortunately, Nina wants Rob all to herself, and a good portion of the movie’s midsection finds the couple attempting various methods to prevent Nina from turning up. There’s no getting rid of her, though, like the phantoms in many newfangled chillers who haunt people, not houses—only here, the personal connection between Nina, who’s not spectral but very physical, and the couple is specific and resonant.

Adding a crucial additional layer to the dark drama are Nina’s parents, Dan (David Troughton) and Sally (Elizabeth Elvin). Like Dane DeHaan’s character in the underrated Life After Beth (Nina Forever’s closest American relative), Rob seeks solace in visits to his deceased beloved’s folks, and in turn helps them cling to her memory. This subplot builds to the movie’s most powerfully emotional scene, particularly strong as it stands in stark contrast to the largely muted tone otherwise adopted by the Blaines.

Nina Forever is suffused in an air of workaday realism one doesn’t often find in movies this grisly. Even as they don’t skimp on the graphic makeup FX (well-done by Dan Martin), the Blaines present them matter-of-factly, as just a part of a troubling situation Holly and Rob have to get on and deal with. Most gratifying, though, is the filmmakers’ frank and honest depictions of their protagonists’ sexuality. The nudity and erotic activities are explicit, yet not sensationalized or prurient in the manner of so many American films. These people are just doing what people in love do, and that’s how the Blaines film them, instead of treating them like performers putting on a show for the titillation of the audience.

Nina Forever’s U.S. release is being timed for Valentine’s Day, and while that makes for a good marketing hook, it’s a little misleading in terms of what it offers the audience. It’s not simply a traditional love story with a supernatural side, nor is it a cheeky subversion of the romance genre. The movie delves deep into what it means to love someone, and how hard it can be to let that person go, while also exploring the idea that undying devotion—as expressed by its title—can be a curse as well as a blessing. Particularly for fans of horror and generally adventurous cinema, it makes a great date movie—though not necessarily a good first-date one.