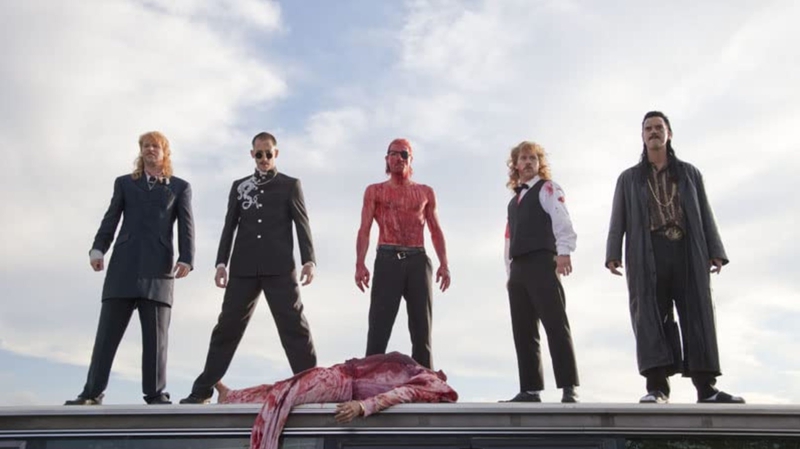 Editor's Note: This was originally published for FANGORIA on August 3, 2012, and we're proud to share it as part of The Gingold Files.

Among the recent European comedies that warrant wider exposure in the U.S., none deserve it more than the pair of New Kids movies out of Holland. And what a happy occasion that the second of them, New Kids Nitro, includes zombies amidst its manic scenario, thus allowing them a little Fangorian love.

To get the obvious out of the way first: New Kids Turbo and New Kids Nitro (both playing Montreal’s Fantasia festival) have nothing to do with that boy band from back in the ’80s/’90s. Indeed, these New Kids would have those New Kids for lunch, or at least rough them up something fierce. They’re a gang of five friends who got their start in a popular Dutch TV series; I have no idea how extreme they were able to get on television, but it’s unlikely they were allowed to be as rip-roaringly, unabashedly, hilariously vulgar as they are in the movies.

Writer/directors Steffen Haars and Flip Van der Kuil play Robbie and Barrie, joined by Huub Smit as Richard, Tim Haars as Gerrie and Wesley van Gaalen as Rikkert. A few of them have mullets and they all have deeply anarchic attitudes, rebelling against society in general and political correctness in particular; their favorite, incessantly delivered insult is “cunt,” with “homo” a close second. They delight in rude behavior and wanton destruction, as do Haars and Van der Kuil as filmmakers; a running gag is some poor supporting player getting suddenly creamed by a speeding motor vehicle. If these guys have any redeeming values, it’s their devotion to each other and their loved ones, like Richard’s trailer-trash mom Corrie (Juul Vrijdag) or Rikkert’s green Manta car. That, and the fact that through some indefinable cinematic alchemy, material that could have been tiresomely crude or gross is instead often screamingly funny.

In Turbo, all five of these suburban dwellers (in the real-life village of Maaskantje, which has apparently become a reluctant tourist attraction thanks to these films) lose their jobs, and decide to rebel against the economy by taking what they want and paying for nothing. When their exploits become televised and they develop a countrywide following, the government and the armed forces get involved, leading to an apocalyptic confrontation. There are no genre elements here, but there is a level of comical splatter that will delight anyone who enjoys the early work of Peter Jackson.

Nitro plants itself in Fangorian territory early on, as a meteorite crashes in the farm town of Friesland, and the local cows lick it and begin producing record amounts of milk; the townspeople who drink it quickly develop that familiar white-eyed, staggering, flesh-hungry look. Then they’re sidelined for a while as the principal plot embroils the Maaskantje boys in a feud with the neighboring burg of Schijndel, and particularly Dave (Guido Pollemans), a roughneck blowhard idiot of the type Danny McBride would play if Hollywood dared to make movies like this. Eventually, the action takes the New Kids to Friesland, where the image obligingly goes grindhouse/sepia and lots more farcical blood is spilled.

Nitro doesn’t have quite the kick of Turbo, which roots its comedy in the current worldwide economic woes; even the most outrageous film gets extra benefits from rebelling against something real. But Nitro delivers the same goods in terms of knockabout, high-energy, lowbrow farce, and clips by at a brisk 76 minutes (Turbo is a comparatively expansive 84). Throughout both movies, there’s provincial humor and guest appearances that’ll likely be lost on American viewers, but no matter; shameless humor is a universal language, especially when it’s done as well as it is here. They may not be for all tastes, but any fan of guilty-pleasure flicks that seem tailor-made for midnight viewing will want to join these New Kids on their block.