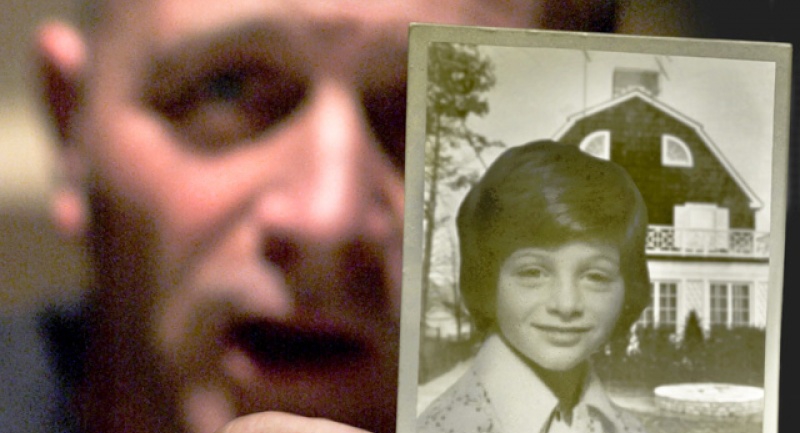 Editor's Note: This was originally published for FANGORIA on July 23, 2012, and we're proud to share it as part of The Gingold Files.

There have been many—probably way too many—movies inspired by the terrible events within and surrounding the house at 112 Ocean Avenue in Amityville, New York, most purporting to be based to some degree or another on fact. It can be unequivocally stated that My Amityville Horror is the most true-to-life film to deal with the phenomenon, and pretty much as unequivocally stated that it’s the best of them too.

World-premiering at Montreal’s Fantasia festival, My Amityville Horror is a documentary re-examining the case from the point of view of Daniel Lutz, who was a preteen when he, his parents George and Kathleen and two siblings moved into that house, then fled a month later, claiming to have been beleaguered by supernatural forces. Looking older than his 45 years, Daniel is seen speaking directly to director Eric Walter’s camera, in a session with a psychologist and, for the most screen time, recounting his experiences to Laura Didio, the journalist who spearheaded an investigation into the truth behind George’s claims of the haunting. The fact that Didio is his primary confessee says something about how the Lutzes quickly came to be defined by their media coverage.

The story Daniel tells—for the first time ever in his own words—is partially familiar from the movies, documentaries, etc. that have previously explored the Lutzes’ plight: swarms of flies, a foul stench, a window that slammed down on his hands, etc. What’s new is Daniel’s specific portrait of George as a monster equivalent to anything that might have paranormally manifested in the house. Upon marrying Kathy, we learn, he insisted on having her children’s surnames, including Daniel’s, legally changed to his own, and Daniel tells of how this ex-Marine exerted control in many other ways. This led to a rift between stepfather and son that only exacerbated the trauma when the haunting began—a situation that Daniel, we eventually learn, holds George directly responsible for.

For a good part of the running time, Walter lets Daniel tell his own story, as he quite persuasively maintains that the frightening assaults which many have since discounted as a hoax really happened. While he states at the beginning that “This is not something I enjoy talking about,” he’s clearly exorcizing some personal demons by finally unburdening himself about experiences that apparently included exorcizing some literal ones. His account is supported by a visit to the home of Lorraine Warren, the well-known psychic researcher who, with her late husband Ed, also looked into the Amityville case and famously backed up George’s claims.

The longer Daniel talks and the more he recalls, though, the more difficult it is to accept everything he’s saying, and Walter introduces other subjects (para- and regular psychologists) who suggest that these memories from an impressionable age might not necessarily be trustworthy, and could have been twisted by external influences—including the first Amityville Horror movie. (Though Walter never makes the connection, it’s hard not to think of certain cases of child-abuse accusations in which the alleged victims came to believe they had been molested thanks to the power of repeated suggestion from authority figures.) Just because Daniel believes all these things happened, Walter seems to be asking, does that mean we should believe they did too?

It’s a question that’s part of what gives My Amityville Horror its fascination, as Walter avoids editorializing of his own and leaves us free to determine how much of whose point of view we wish to believe. Daniel’s recollections may come to seem outlandish, but he himself is such a persuasive presence, with no apparent ax to grind other than achieving some kind of catharsis, that it’s easy to feel for his trauma, whether one buys into the supernatural side or not. If there’s anything troubling about Walter’s approach, it’s that no one speaks for George to counterbalance Daniel’s accusations of extremely bad fatherhood—but then, George owned this story for so long when he was alive that there are already plenty of places to get his side of it. Meanwhile, Warren comes off as a tad…eccentric, with Walter including details like a couple of live roosters she keeps in cages, whose crowing occasionally interrupts her scenes. This section does contain one of the movie’s more dramatic moments, as Daniel questions Walter’s belief in God while revealing the importance religion still holds for him.

This is also one of several places where Daniel directly confronts his behind-the-camera interviewer, and he might well be challenging doubters in the audience as well. Each viewer will bring his or her own level of skepticism to My Amityville Horror, and whether it sways your opinion about the case or not, it will certainly give you a new point of view and perspective to consider. More to the point, though, it provides a new, heretofore undocumented and very personal perspective on a situation that ceased to belong to its participants decades ago. “I just wanted someone to believe me” is the movie’s poster tagline and one of Daniel’s closing comments, and it’s both the mission statement of My Amityville Horror’s subject and a gauntlet the movie throws down to those who see it.