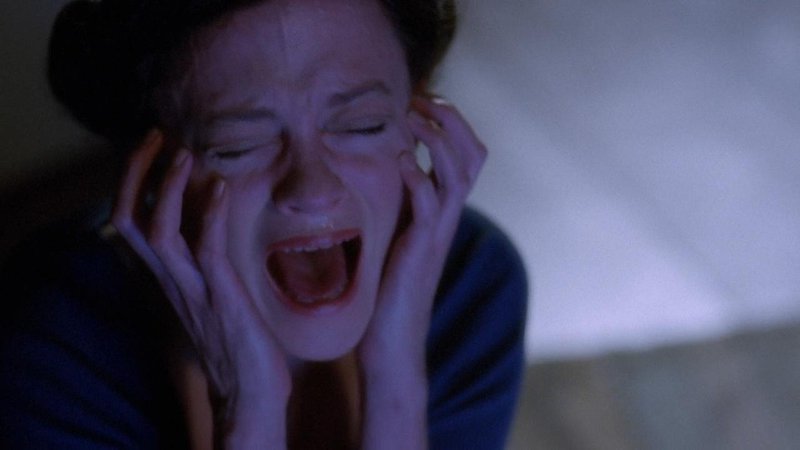 Editor's Note: This was originally published for FANGORIA on June 13, 2006 and we're proud to share it as part of The Gingold Files.

Back when Masters of Horror was first announced, part of the pitch was that the use of 13 different directors would result in a wide variety of visual styles—John Carpenter’s wouldn’t look like Dario Argento’s wouldn’t look like Tobe Hooper’s, etc. And yet, no doubt due to time and budget restrictions and the fact that all the segments were shot in Vancouver, there’s a certain sameness (albeit a good amount of slickness and polish) to the way they all appear. It’s the tone of some of the best entries that sets them apart from the others, and perhaps the most distinctive is Sick Girl by Lucky McKee, who was called onto the project at the 11th hour to replace Roger Corman, and who, working with writer Sean Hood, contributed the only Masters that’s as much a romantic comedy as a horror show.

McKee reconfigured Hood’s hetero scenario as a lesbian love story, less out of prurient concerns than in the interest of making it a vehicle for his favorite actress, Angela Bettis. She has yet to do the same thing twice among her genre films, and here adopts a clipped diction that meshes perfectly with both the director’s old-fashioned approach (on the DVD edition, he cites Alfred Hitchcock and Michael Powell as influences) and her eccentric character. Ida Teeter is an entomologist who is much more comfortable expressing affection toward bugs than people—until the day she decides to finally take the plunge and talk to Misty Falls (Erin Brown), the lovely blue-eyed girl who’s been quietly stalking her workplace. The two are soon head over heels for each other, and Misty moves into Ida’s place; unfortunately, love enters Ida’s life at the same time as a new, exotic insect that gets loose in her apartment and, unbeknownst to her, infects her new sweetheart. As Misty’s shy demeanor gives way to wild mood swings and profane outbursts, the story becomes a metaphor for every relationship that has gone from torrid to toxic before those involved knew what hit them.

Sick Girl may be one of the best-constructed Masters in terms of pace and scale; with only a manageable handful of characters and pair of key settings, it nonetheless sustains both tension and amusement throughout, and the story plays as neither too much nor too little but just right for the hour length. As Ida opens herself up to loving Misty and then comes to fear her, Bettis conveys honest emotion behind the role’s prickly exterior. She has a fine foil in Brown, who decidedly steps away from her pseudonymous past (albeit with her character’s name as a reminder) to provide a fully felt portrayal of a girl who transforms from shy and uncertain to a passionate lover and then a figurative monster before she finally becomes a literal one (an impressive contribution by KNB EFX).

The episode’s quirky humor doesn’t come at the expense of the characters; McKee clearly loves this odd couple himself, and saves the fun-poking for Ida’s disapproving landlady (Marcia Bennett). He also loved the Masters experience; while some of the series’ other directors have noted the many challenges of the quick-and-dirty shoots, McKee says on Sick Girl’s DVD audio commentary that he enjoyed the fast pace, and even surprised the crew with how quickly he and his team got things done. (A number of notable moments, we learn, were nailed in one take.) The filmmaker shares the track with Bettis, co-star Jesse Hlubik and composer Jaye Barnes Luckett, and it’s a funny, occasionally raunchy reminiscence by a team who all had a great time putting the episode together. McKee explains how he simplified his angles and played with point of view while noting the risks of going as dialogue-heavy as he does, plus his preference for physical creature FX over CGI (“We want to make movies, not cartoons”).

His cohorts chime in only occasionally, but they have more to say in the Blood, Bugs and Romance and Working With a Master featurettes, which contain very little repetition from the commentary. Between the two, we’re given a good sense of McKee’s thematic concerns and cinematic history—the bulk of it, sadly, still unavailable for wide public consumption. His first feature, the zombie gore flick All Cheerleaders Die (co-scripted and -directed with The Lost’s Chris Sivertson) has yet to see commercial release, and his studio debut The Woods remains in limbo; we learn quite a bit about them from McKee and co. and are treated to a number of messy highlights from Die. (The featurette producers have to settle for representing Woods with shots of spooky trees; Sivertson says he’s seen several cuts of the troubled production, and they’re “all awesome.”) There are even a few promisingly surreal snippets from Roman, the upcoming microbudget feature that’s sort of a “brother” to May, with Bettis directing McKee as an introvert who homicidally snaps.

Bettis quips that she has always been disappointed that she’s not able to play male characters, and that Sick Girl allowed her the chance to do so, in a sense; in one of three On Set interviews, she further praises the opportunity to “put forward some masculine qualities” through Ida even as she reveled in the “estrogen-fest” of a scene between all of Sick Girl’s female leads. Brown chats engagingly about the joys of playing her best role yet and the trials of wearing her climactic monster makeup (with behind-the-scenes footage), while bug wrangler Brad McDonald introduces us to a number of the multilegged supporting players—including a red-legged centipede that’s vicious and dangerous enough to warrant its own feature-film vehicle. (McDonald claims that its victims actually die from the pain of its venomous bite!)

Anchor Bay’s colorful 1.77:1 transfer and sharp Dolby Digital 5.1 soundtrack continue the high standards the company has brought to all the Masters titles so far. The disc is rounded out with a decent still gallery, a batch of Masters trailers, an informative McKee bio by Richard Harland Smith and a montage of on-set footage. Some good snippets are to be found here, but it’s too bad the musical overscoring obscures what the cast and crew are saying. In particular, when McKee is seen briefly chatting with Tobe Hooper, it’s a shame we can’t hear what he’s discussing with the man who, as we learn in one of the featurettes, gave him his entree into the Masters of Horror circle in the first place.