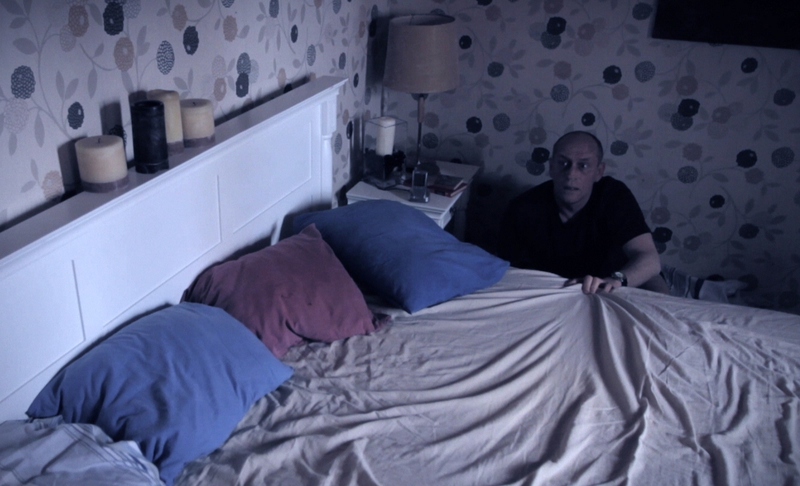 Editor's Note: This was originally published for FANGORIA on August 2, 2011, and we're proud to share it as part of The Gingold Files.

One of the more eye-catching posters on display at Montreal’s current Fantasia festival has been the one-sheet for Marianne, the debut feature by Swedish writer/director/producer Filip Tegstedt. The art is redolent of classic ’80s VHS covers, and suggests a project born of nostalgia for the shriekers of that era. Instead, the movie harks back to an earlier tradition of quiet supernatural dramas, and is another of the many films at Fantasia this year to be as concerned with the personal as with the paranormal.

Taking a few pages from Swedish folklore, Marianne also seems inspired by the family and marriage dramas of Tegstedt’s fellow countryman Ingmar Bergman. Its focal point is Krister Larsson (Thomas Hedengran), a high-school teacher who has lost his wife in a car accident, leaving him to raise their teenage daughter Sandra (Sandra Larsson) and their newborn infant alone. The tragedy has taken a psychological toll on him as well as his relationship with Sandra, who has taken up with an older boyfriend, Stefan, nicknamed “Stiff” (Dylan M. Johansson). As Krister’s days become increasingly troubled, so do his nights, as he is visited nocturnally by a mysterious woman who makes the most unsettling noises since Kayako in the Ju-on/Grudge movies. Or is this specter just a byproduct of Krister’s stressed psyche?

Marianne is one of the few films to play the is-it-real-or-in-the-mind? game where the answer is legitimately in question for almost the entire running time. Tegstedt plays the movie less as a traditional ghost story and more as a portrait of a man on a downward psychological spiral for whom the “ghost” may be just one symptom. Krister’s therapist (Peter Stormare, working in his native tongue) believes Krister’s suffering from “sleep paralysis,” in which his mind wakes up but his body remains asleep. Or perhaps the eerie figure is a manifestation of guilt, as Krister had been seeing a lover whose existence is revealed in the film’s very first scene and developed among the flashbacks Tegstedt carefully places throughout Marianne, and whose appearance seems spookily similar to that of the female presence tormenting Krister in his slumber. When he eventually confides in Stefan, a devotee of the occult, Stefan is convinced the being is a “Mare,” a sort of succubus who preys on the sleeping.

As Tegstedt keeps the possibilities in play throughout Marianne, he resists overplaying the supernatural side of the story and maintains a down-to-earth tone; even a makeshift exorcism performed by Krister and Stefan is played matter-of-factly, absent any grandiose visual gestures. The performances follow suit, with Hedengran holding the compelling center by understating his protagonist’s emotional anguish. Clearly, Krister has been neither the best husband nor the best father, yet Tegstedt and Hedengran maintain sympathy for him despite his flaws. The filmmaker gives generous time to Sandra’s emotional turmoil as well, and as played by Larsson, she’s far more than the sum of her Goth appearance and rebellious attitude; though she behaves in adult ways, she’s also still a child in need of a father.

Lest this all sound too dysfunctional and depressing, Tegstedt develops a sense of mystery and creeping fear that balance the sadness and make Marianne an absorbing viewing experience. It’s quite an accomplishment for a first feature, as Tegstedt doesn’t try to impress with stylistic bravura but rather remains devoted to the emotional truths of his characters and story. Which is not to say the movie isn’t technically accomplished; with the help of cinematographer Johan Malmsten, Tegstedt suffuses the proceedings with the proper grim atmosphere. It’s a thoughtful and mature film, one possessing a few qualities in common with the Swedish breakout Let the Right One In, and marks Tegstedt as a talent to watch on the international scare scene.