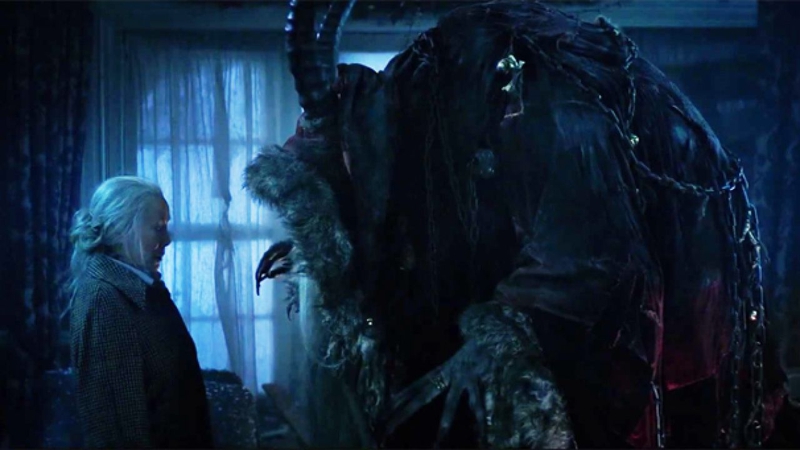 Editor's Note: This was originally published for FANGORIA on December 4, 2015 and we're proud to share it as part of The Gingold Files.

Krampus is comin’ to town, and a major-studio horror film hasn’t savaged Christmas with this much glee since Gremlins.

“It’s Beginning to Look a Lot Like Christmas,” Bing Crosby croons over the opening-credit sequence, which treats us to the traditional sight of seasonal shoppers behaving like animals and fighting over sale items. Also seen brawling is our preteen hero Max (Emjay Anthony), on behalf of a holiday he’s struggling to still believe in. That’s difficult in the face of his too-cool-for-all-that teenage sister Beth (Stefania LaVie Owen) and his distracted parents Tom (Adam Scott) and Sarah (Toni Collette). The main distraction is, inevitably, the arrival of relatives for the holiday: Sarah’s boorish sister Linda (Alison Tolman) and brother-in-law Howard (David Koechner) and their offspring, who consist of a nonsyllabic boy with a mouth like Phenomena’s monster child and two girls smothered in hockey gear. Worst of all is loudmouthed, terminally critical Aunt Dorothy (Conchata Ferrell).

Not the most pleasant company to be stuck with, and at first, one worries that director Michael Dougherty, working from a script he wrote with Todd Casey and Zach Shields, will be subjecting us to too much anti-cheer for us to remain involved. Fortunately, Max is able to anchor our sympathy and the human side of most of the characters is allowed to come out, as they are confronted with a host of inhumans. Max’s impulsive act of rejecting the Yuletide spirit—tearing up a letter to Santa in which he wishes for better things for his family—is the final gesture that strands their house in a winter horrorland, bringing down an overwhelming blizzard and decorating the yard with macabre snowmen (created by Pumpkinrot, who made the eerie scarecrows for Mr. Jones), heralding the arrival of Krampus and his sack full of perverse playthings.

Dougherty arguably made the best Halloween movie not directed by John Carpenter with Trick ’R Treat, and here, as opposed to taking that holiday’s ambience to extremes, he flips the visual script of typical Xmas-flick fare to evoke a rich atmosphere of wintry desolation and isolation. Production designer Jules Cook, who’s got an art-directing résumé full of Lord of the Rings and Matrix movies, and cinematographer Jules O’Loughlin assist Dougherty in taking the characters through foreboding, grey exteriors and spooky dark interiors, as the terrorized brood try to figure their way out of their chilling situation. Refreshingly, most of the decisions and survival tactics they try actually make sense, and Dougherty surprises a couple of times regarding the order in which the characters meet their fates.

In the broader sense, Krampus lacks the narrative invention of Trick ’R Treat, which intertwined multiple stories in such a way that they complemented and enriched each other; this is a more traditionally told pick-’em-off scenario. As in his previous film, however, Dougherty maintains a fidelity to practical FX, and the Weta Workshop team has responded with a glorious assortment of evil toys intent on treating the trapped brood like Christmas cookies. Then there’s Krampus himself, a thoroughly imposing, chain-dragging figure who doesn’t quite look like you might expect when his face is finally revealed, but is pretty damn creepy nonetheless. Even his digitally created appearances pack punches, particularly the scene in which he’s introduced, and there’s also effective CGI involved with some nasty gingerbread men who are this film’s most direct descendants of those violently mischievous Gremlins.

Krampus takes its time getting to the heavy monster action, but you don’t really mind when the cast is this game for wholeheartedly exploring negative impulses and equally good at letting their roles’ positive sides come through. On the way to the animatronic assaults, Dougherty also elicits a few good frissons via an animated flashback (done with a nice retro vibe by Aaron Becker) that illustrates a monologue in which Max’s grandma Omi (German-cinema veteran Krista Stadler) explains the legend of Krampus. The “anti-Claus” has been all over the screen scene lately in low-budget fare, and it’s cool to see him get a major-studio showcase at a time when old-fashioned, practically created monsters have been at a scarcity in higher-profile features. This vehicle, with its relatable young hero and fanciful scares, just might become a naughty holiday-viewing perennial for adventurous kids, even as its jolts don’t feel watered down in the service of the PG-13 rating.