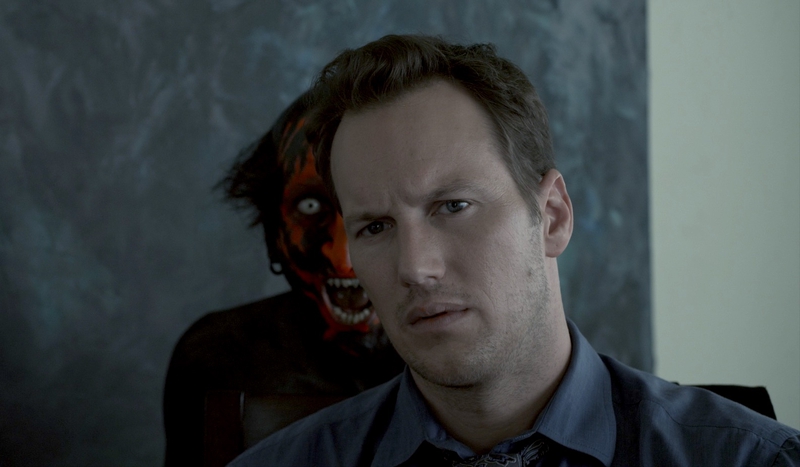 Editor's Note: This was originally published for FANGORIA on July 11, 2011, and we're proud to share it as part of The Gingold Files.

Those hardcore horror fans who passed on Insidious (on DVD and Blu-ray from Sony Pictures Home Entertainment) because of its PG-13 rating didn’t know what they were missing—and apparently forgot about Poltergeist and other past films that have delivered the scary goods with PG or PG-13 ratings. Poltergeist, in fact, was a clear template for Insidious, which nonetheless establishes its own identity as a superior haunting story.

On a budget, and with a creative mission statement, that eschewed flashy, extensive visual FX, director James Wan and screenwriter Leigh Whannell have delivered the kind of low-key, powerfully spooky tale they intended to make Dead Silence into, before studio interference that insisted on a more visceral approach in the wake of their Saw success. Insidious is about as far from the duo’s trendsetting torturous success as it’s possible to get and still be a horror film (indeed, the discs’ cover makes no mention of that previous hit, but cites the producers’ Paranormal Activity twice), though the complete lack of splatter doesn’t mean Wan and Whannell don’t worm their way into your nervous system and play havoc with it for an hour and a half.

They do so by establishing a normal, likable, personable family and then plunging them into a private hell that begins when oldest child Dalton (Ty Simpkins) takes a tumble off a ladder while exploring the attic of their new home. There appears to be no harm done, but the next day the boy falls into a coma that doctors can’t explain. After he spends a few months in hospital with no change in his condition, his parents Josh (Patrick Wilson) and Renai (Rose Byrne) bring him home—and that’s when the bad stuff really starts, events that lead them to believe their house is haunted. But a move to a new home doesn’t help, and Josh’s mother Lorraine (Barbara Hershey) calls in her paranormal-expert friend Elise (Lin Shaye), who arrives with two comical ghostbusting assistants (Angus Sampson and Whannell himself) to try to get to the bottom of Dalton’s condition.

Beyond the echoes of Poltergeist (with Elise standing in for Zelda Rubinstein’s Tangina), Insidious also pays direct homage to other supernatural pics, including the original The Haunting and the “automatic writing” scene from The Changeling. One of the major twists is that, as the movie’s promotion has reinforced, it’s not the house that’s haunted, and the fact that relocation doesn’t solve the problem adds to the desperation of the family’s situation. Wilson and Byrne do a terrific job of establishing a warmth and chemistry that’s also threatened as Josh refuses to believe Renai’s early claims that something terrible is shadowing them, and they work well with the young actors, particularly Simpkins (who previously played Wilson’s son in Little Children).

And then there’s the fact that Wan demonstrates here, more than ever before, that he just plain knows how to deliver a scare, achieving jump-out-of-your-seat moments with the simplest cutaways and bits of staging, and also via more elaborate setpieces. These range from an intense seance sequence that packs a punch through cutting, lighting and wind FX, with no need for elaborate digital tricks, to a finale that wrings more chills than you might think possible out of the simple action of the characters making their way through darkened rooms. The chills are punched up by Joseph Bishara’s score, which makes ear-jangling use of scratchy strings reminiscent of The Evil Dead; Bishara further contributes to the creep factor by appearing on screen as Insidious’ most frightening embodiment of evil.

The music and other eerie sound work really wrap themselves around your brain when experienced via the Blu-ray’s DTS-HD MA 5.1 audio, and while the visuals largely adopt a monochrome coldness in keeping with the overall tone, the 2.40:1 transfers on both discs are sharp and nicely detailed. The supplemental package is a bit disappointing, however, with Wan, Whannell and co. sharing enough good information in the 25 minutes of featurettes that a more comprehensive study of Insidious (via either a commentary or full-length documentary) would have been welcome. The longest of the three segments, “Horror 101: The Exclusive Seminar,” focuses on Wan and Whannell’s efforts to take familiar tropes and expectations and upend them, from haunted-house standards (noting that the family transitions from a traditional-looking setting for such a movie to a more inviting home—where things get worse) to possession-film conventions. It’s likely many fans will be happiest to hear that one key goal was the omission of “false scares,” which the duo made good on.

Even as they were crafting an experience in honest terror, on a low cost and swift schedule, the Insidious gang still managed to have fun, as documented in “On Set With Insidious.” From Wilson keeping things light around Simpkins between scenes to he and Byrne trading kid-inappropriate quips at other moments to the ghost extras doing a Thriller-esque dance, this piece has the most fun stuff of the trio, along with behind-the-scenes footage of the stunts and a key scene that wound up cut from the film. Finally, “Insidious Entities” details the unusual casting of the assorted ghosts and demons (with an explanation of the difference between the two), like a little person playing the “dancing boy” and a man portraying the old woman who became the movie’s signature image. It’s a shame that among these performers, only J. LaRose (the “long-haired fiend”) gets to speak about the experience, though one bit of trivia is revealed here when we see a slate emblazoned with the original shooting title The Astral.