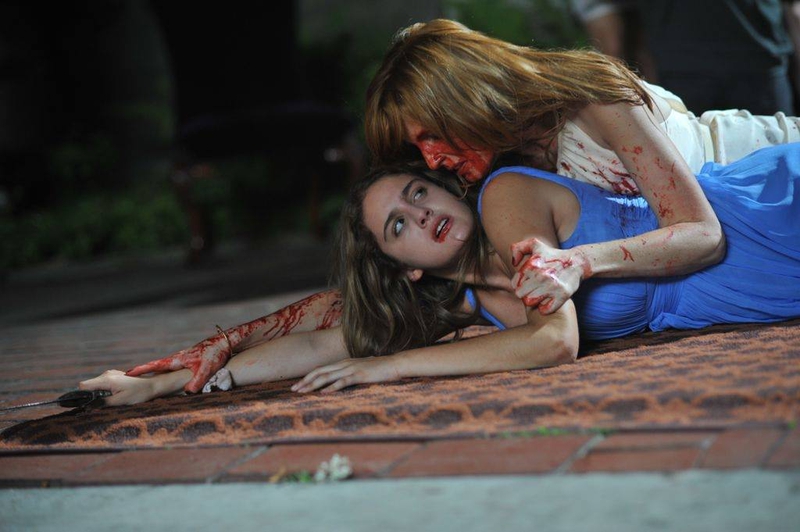 Editor's Note: This was originally published for FANGORIA on September 9, 2014, and we're proud to share it as part of The Gingold Files.

Twilight meets Suspiria in Innocence, a movie that isn’t even as much fun as that description might suggest, in part because it takes quite a while for that meeting to happen.

On paper, anyway, this seemed to have more going for it than your typical post-Twilight supernatural YA flick. It’s based on a novel by well-regarded author Jane Mendelsohn that predates Stephenie Meyer madness and is apparently rife with dark coming-of-age metaphor. The production entity was Killer Films, which has given us such spiky fare as Boys Don’t Cry, I Shot Andy Warhol and One Hour Photo. Somewhere along the way, though, the edge and meaning got drained out, and what’s left is a wan collection of teen angst/thriller conventions in which someone bleeds every once in a great while.

Originally set to star Abigail Breslin and Julianne Moore, Innocence now toplines Sophie Curtis, who resembles a cross between Kristen Stewart and Alicia Silverstone as she plays 16-year-old Beckett Warner, who moves to Manhattan’s Upper West Side with her father Miles (Linus Roache) following the death of her mom—since every heroine in movies like this has to have a dead parent, it seems. She’s enrolled in Hamilton, a tony Riverdale prep school, where one of the other girls greets her with odd behavior and the admonition, “We’re all sick around here.” That’s a little unnerving, but not nearly as much as when that same student takes a header off the school’s roof a little later, narrowly missing Beckett as she crashes to the pavement.

You’d think our heroine might take that as a sign to pursue her education somewhere else, but she doesn’t come off as terribly observant, even as the movie continues dropping not-very-subtle hints that something is amiss at Hamilton. One of its key figures is Pamela (Kelly Reilly), the school nurse who, like the rest of the female staff, looks and dresses like a European fashion model. No sooner has Miles met this glamazon than he has invited her to come live with him and Beckett, though from the look on Pamela’s face when Beckett gives her a kiss on the cheek goodnight, it’s clear her predatory designs are on the daughter, not the father. And just to make Pamela and her cohorts’ specific interest in the girl clear in advance, they keep emphasizing how Beckett should keep herself “pure.” That may be hard to do once she starts hanging out with fellow student Tobey (Graham Phillips), a cute skateboarder who lives in an absolutely fabulous Riverside Drive mansion.

With its lifestyles-of-the-very-rich veneer and attractive cast (also including Kiefer Sutherland’s daughter Sarah as Beckett’s new BFF and Stephanie March, Perrey Reeves and Sarita Choudhury among the Hamilton team), Innocence suggests an elongated episode of a WB supernatural series, minus the complex intrigue that keeps fans of The Vampire Diaries and its ilk coming back for more. Director/co-writer Hilary Brougher did well by the grounded psychological thrills of the Tilda Swinton-starrer Stephanie Daley, but her approach to more explicit horror here is a standard-issue collection of schoolgirl apparitions, pixilated figures, shock cuts and nightmares, punctuated by loud musical stingers and weird whispery chanting on the soundtrack. Any allegory that might have been present in Mendelsohn’s novel is gone; everything is on the nose here, in terms of both the storytelling and the attempted scary stuff.

Eventually, the endgame of the Hamilton women is unveiled and the aforementioned Argento echoes come to light—though needless to say, these are more pronounced in the subject matter than in the decidedly softcore presentation. Innocence might have had a little more impact had it been produced soon after its source novel’s publication, but by now, even for its target audience, it’s far too little, far too late.