Review: I’LL ALWAYS KNOW WHAT YOU DID LAST SUMMER 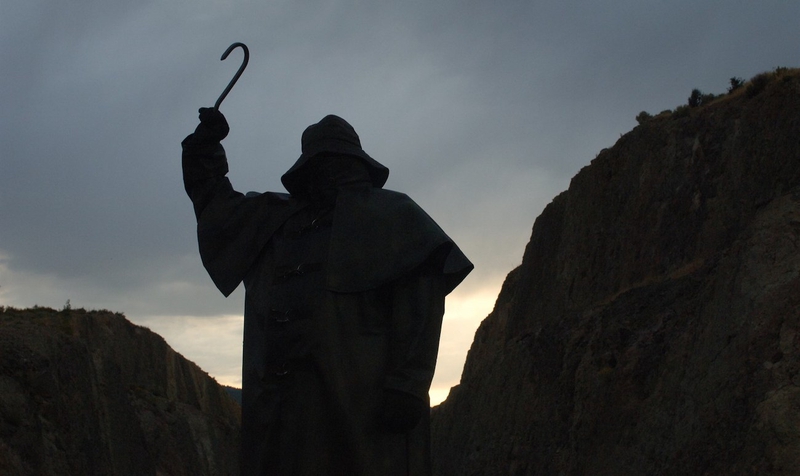 Editor's Note: This was originally published for FANGORIA on July 5, 2006, and we're proud to share it as part of The Gingold Files.

A press release for one of the mid-2000s’ many direct-to-DVD follow-ups described it as a “thematic sequel”—which can be read to mean, “The same damn plot as the original with none of the characters or cast you may have loved from that first film.” That’s certainly the approach taken by Sony Pictures Home Entertainment’s I’ll Always Know What You Did Last Summer, in which Jennifer Love Hewitt and co. are (not surprisingly) long gone, but the faceless killer fisherman lives on. The original I Know What You Did… had such a specific story hook (no pun intended) that doing a sequel without any returning characters that also didn’t just rehash its predecessor would be quite a challenge, but I’ll Always Know barely even tries. (For the record, a different third entry was penned several years ago by The Art of War’s Simon Davis Barry, setting the slayer upon a group of teens in the wilderness, with Severed Ties’ Damon Santostefano attached to direct at one point.)

Once again, we’re in a small town (this time filmed in Utah, with attractive and ominous photography by veteran Stephen M. Katz) where the local teens can’t wait to escape to college because nothing ever happens there. One of the few things that does happen is a carnival, during which a group of young friends stage a prank inspired by the story of the original killer fisherman, which has by now achieved urban-legend status. They even manage to get ahold of the madman’s original hook, which we’re told wound up on eBay instead of in a crime museum or an evidence locker somewhere. Inevitably, the prank goes wrong, somebody dies and the rest of the gang conspire to keep their complicity unknown to anyone else. Or as they put it repeatedly, in case we don’t get the foreshadowing, “The secret dies with us.”

Cut to a year later and, of course, the secret lives even as the teens start dying. But the new murderer is rather slow on the uptake; he doesn’t claim his first victim until the halfway point and waits till the hour mark or so to really get down to business. In the meantime, director/music-video veteran Sylvain White repeatedly gooses the viewer with loud noises, flash cuts and fake jump-scares while the script by Michael Weiss (who has also penned sequels to Octopus and, coming soon, The Butterfly Effect) goes through pretty much identical paces to the first movie. Heroine Amber (Brooke Nevin) gets a text message instead of a letter telling her “I know…” etc. The group freaks out and some of them throw accusations at others. Assorted suspects are provided (including the dead boy’s dad, who happens to be the town sheriff, and his deputy, who has a thing for Amber). The villain toys nastily with his potential victims, who don’t always respond to the threat with common sense; not long after realizing someone’s after her with potentially murderous intent, Amber rides her bike way up into the mountains all by herself to take some photographs.

It’s all very nice and moody to look at, but there isn’t much suspense, especially when everybody decides to stick around town on the night they believe the killer will come for them, just because one is performing in a talent show and there might be “agents from LA” there. But the whole thing is really undercut by a climactic twist that not only negates the whole whodunit aspect that a good deal of the intended tension is based upon, but puts a spin on the entire situation that just isn’t believable. And if you can’t guess that a) there’ll be a “one year later” epilogue and b) what happens in that epilogue…well, maybe you’ve never seen a teen slasher film before and will get a little more edification out of this one.

The 1.85:1 transfer on Sony’s DVD provides the movie a gloss that belies its straight-to-disc status and shows off Katz’s photography to maximum effect, with good ‘n’ edgy Dolby Digital 5.1 sound. On a commentary track, director White describes the movie more than once as “bubblegum horror,” and it’s hard to argue with him on that; yet he also impresses when he describes how he chose locations, angles and lighting techniques to emphasize the emotional content of certain scenes, and when he states his preference for “harsh,” physical gore FX as opposed to CGI. Unfortunately, he’s also one of a few recent commentating filmmakers who has asserted that the horror genre requires those annoying faux jolts, and seems a little too in love with those flash-frames that create more of a distracting effect than the intended “angst.”

In addition, there’s a making-of piece that runs a little under a half hour and provides a decent peek behind the scenes of the movie (which we find was shot under the dummy title The Hook), even if it doesn’t reveal anything too surprising. Everyone praises White, the actors all seem to be enjoying the shoot and their co-stars and we get some good detail about the creation of the makeup FX and the filming of one of the best setpieces, an attack on Amber on a ski-lift gondola. On the other hand, when the subject turns to “Why We Love Horror Movies,” no one has anything deeper to say than “People love getting scared.”