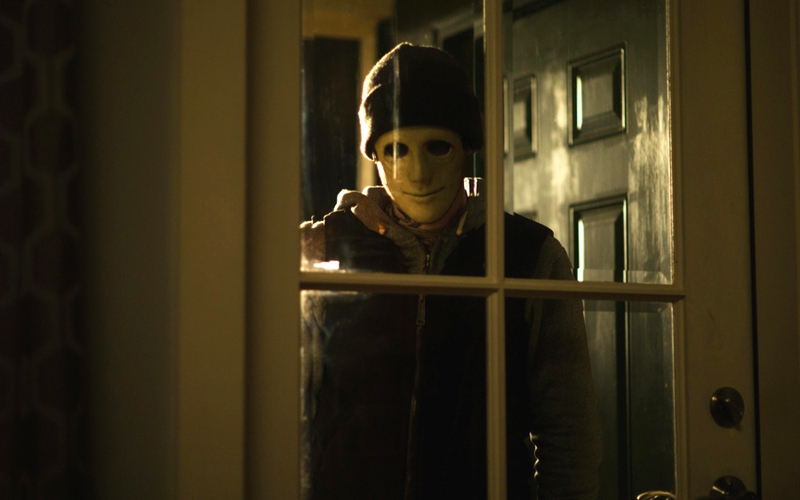 Editor's Note: This was originally published for FANGORIA on March 13, 2016, and we're proud to share it as part of The Gingold Files.

While Mike Flanagan’s nightmares-come-true chiller Before I Wake remains stranded in Relativity’s bankruptcy limbo, he has returned to his low-budget roots from whence his standout debut feature Absentia was spawned, and come up with another winner in Hush, a good old-fashioned truly scary movie.

World-premiering at the current SXSW Film Festival and headed for a global Netflix premiere, Hush tells a simpler story than Absentia, or Flanagan’s subsequent, time-twisting Oculus. It’s an exercise in white-knuckle, single-location tension, driven by ruthless character logic in the script Flanagan wrote with Kate Siegel, who also stars. She gets an “introducing” credit despite a number of previous screen appearances, including Oculus, but perhaps that’s because she truly arrives here, playing Maddie Young, an author who’s been deaf and mute since a bout of meningitis at age 13, and lives alone in a house amidst deep woods. The opening scenes swiftly and effectively establish Maddie and her situation, as she interacts with neighbor Sarah (Samantha Sloyan) and struggles with writer’s block, trying to figure out which of seven endings to use for her second novel.

Flanagan and Siegel have no such issues, as their scenario proceeds cleanly and relentlessly from the moment a masked stranger (John Gallagher Jr. from 10 Cloverfield Lane) turns up outside Maddie’s glass door after dark. The teasing suspense begins simply as he figures out he’s dealing with someone who can neither hear him nor vocally call for help, and then determines the scariest way to alert her to his presence. With Maddie trapped and apparently helpless, he decides against simply breaking in and killing her, and becomes the crossbow-toting feline in a cat-and-mouse game that forces Maddie into survival mode.

There’s a logical loophole in the setup, of the type that’s almost inescapable in a movie like this (surely a deaf-mute residing in the middle of nowhere would have a panic button, or some kind of alarm she could set off?), but once you get past that, Hush plays fair and plausible as it tightens the screws and Maddie tries desperately to figure out how to either think or fight her way out of her predicament. Her lack of hearing and speech isn’t a gratuitous thriller gimmick; Siegel and Flanagan develop her as a woman with a unique internal life, whose particular creative inspirations (she writes thrillers, of course) eventually come to aid her when her life most depends on them. Convincingly terrorized and able to defend herself while eschewing damsel-in-distress or superwoman excesses, Maddie provides the film a rock-solid, empathetic center.

The villain is not some invincible, unkillable bogeyman either, but a deranged, sadistic human being whose evidently well-honed killer instinct gives him a major starting advantage over Maddie. There’s a small, unsettling visual hint in one scene that he’s had quite a bit of practice, one of a number of well-considered details Flanagan and Siegel have sprinkled throughout their scenario. Confining themselves to one house and less than a handful of characters, they come up with fresh ways to exploit the location and situation for the full length of the taut under-90-minute running time, at least three-quarters of which necessarily proceeds sans dialogue. They keep the stakes rising and the upper hand ever-fluid, encouraging an identification with Maddie; you may well catch yourself wondering what you would do in her shoes. And you may be surprised by the resourcefulness of some of her decisions; that time spent writing thrillers has clearly stood her in good stead.

Flanagan directs it all like an old hand at the genre himself, on just his fourth feature. Working with cinematographer James Kniest and serving as his own editor, he frames and times the stalking and action for maximum impact, and while most of the terror is psychological, he doesn’t shy away from some painful-looking bloodshed when the scenes call for it. That blood is shed on both sides as Hush continues, and there are several moments that would likely get an audience good and riled up; indeed, the only disappointment attending the film is that it’s going out to the world via the streaming service, when it’s the kind of viewing experience that would be a hell of a lot of fun to share with a theater-sized crowd.