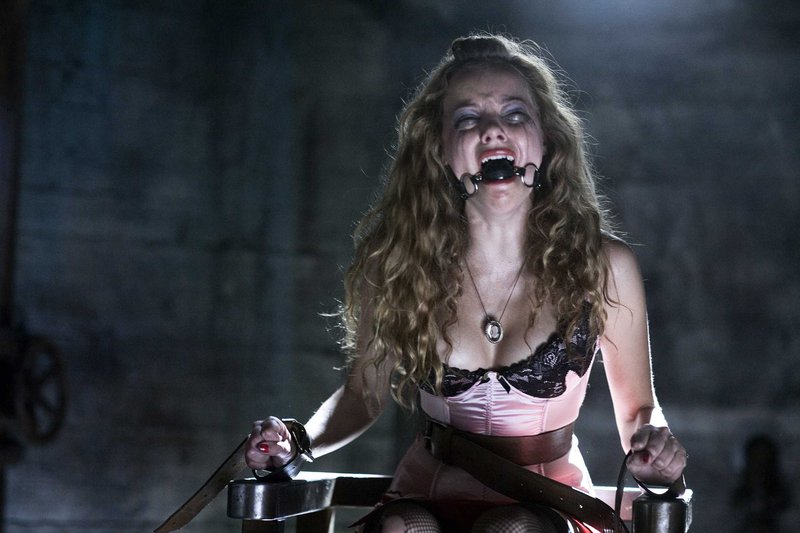 Editor's Note: This was originally published for FANGORIA on June 7, 2007, and we're proud to share it as part of The Gingold Files.

Eli Roth presented himself with both an advantage and a hurdle when he decided to showcase female protagonists/victims in the sequel to his hit torture-film trendsetter. While the girls who run afoul of the murder-for-money syndicate during their stay in Europe could only be more sympathetic than the horndogs who were punished for their hedonism in the original, their suffering—especially given Roth’s promise to up the grisly ante this second time out—ran the risk of becoming more unpleasant and/or queasily misogynist than the guys’ victimization. Hostel: Part II certainly pulls no punches, or slashes and gougings, when it comes to the violence inflicted on its heroines, and one key setpiece may have even hardened horror fans squirming uncomfortably in their seats. Yet through both tone and incident, Roth manages to redress the balance by the film’s end, vindicating its sadistic excesses in the rousingly cathartic final reels.

In other words, Hostel: Part II is as gory as modern mainstream cinema can be, and ultimately gets away with it. (In both senses; I’d love to know what deal with the devil Roth made to win his R rating.) It helps that the movie is superior to the first Hostel in every way; Roth feels more in command of his filmmaking skills this time around, and adds interesting wrinkles to the previous scenario. Following a prologue that ties up (and cuts up) the loose ends from its predecessor, the storyline returns to Europe and focuses on a trio of college-age girls studying art in Italy. Rather than a carnal playground as seen through the eyes of the first Hostel’s ugly young Americans, Europe here is a threatening environment from the start, as Beth (Lauren German), Whitney (Bijou Phillips) and Lorna (Heather Matarazzo) run afoul of assorted unpleasant guys during a train trip to Prague. It’s no surprise that they’re easily manipulated by new acquaintance Axelle (Vera Jordanova) into taking a potentially relaxing side trip to a Slovokian spa, and there’s not a great deal of suspense involved in the question of what will happen to them when they get there. (Roth acknowledges the inevitability with a jokey cut from one girl wondering out loud where they’ll stay to a shot of the titular establishment.)

This time, however, we learn a little more about the inner workings of the organization that uses the hostel as ground zero for the procuring of victims, and where the proprietor stages on-line auctions for potential victimizers to bid on. And we get to know two of the winners: Todd (Richard Burgi), who wants to boost his killer persona with a real murder, and Stuart (Roger Bart), introduced via a glimpse of his loveless home life that succinctly establishes why he might take out some serious frustrations elsewhere. The two actors establish an effective alpha male/underdog dynamic (Todd calls Stuart “bro,” but it’s never made clear if they’re actually siblings), and Roth builds tension via crosscutting between their trek toward the torture factory and the heroines who are destined to be their victims. Along the way, the writer/director throws in moments of twisted/banal humor, as when Todd is given a buzzer that will alert him of the girls’ capture which resembles the type you might get while waiting for a table at the Outback Steakhouse.

Even if the fates of at least some of the heroines are a foregone conclusion, it doesn’t feel like Roth is spinning his wheels during the lengthy buildup to their torment. He genuinely seems to care about these young women, and elicits empathetic performances and a natural camaraderie from his lead actresses—particularly German, who anchors both the trio and the movie. That doesn’t mean, of course, that Roth shows any mercy once they fall into the villains’ clutches. The centerpiece murder—the one represented in those hard-to-miss marketing images—is a literal bloodbath, a concerto of cruelty made all the more difficult to watch by the very convincing agony of the actress in question, and the all-too-believable makeup FX by KNB. Those who have branded the new trend in genre cinema as “torture porn” will find plenty of ammunition here (both people involved are nude), but there’s also no denying that, as opposed to a celebration-of-death-fest like Final Destination 3, this movie takes violence seriously, and wants you to hurt while watching it. If you hear people cheering in the theater at the end of this setpiece, you might be more concerned for your own safety than for that of the onscreen characters.

In any case, this is the turning point that makes it clear Roth is going to play rough, and that no one of any age or gender is safe. And since he goes so extreme at the midway point, the suspense and expectation for a grisly result is raised every time a weapon is produced—yet there are a few key scenes where the brutal punchlines occur offscreen, occasioning more of an emotional response than a visceral one. Eventually, as the movie approaches its climax, the mayhem does go over the top, inviting the audience to whoop its approval—but in a manner that’s justified by the turns the story takes, and serves as almost a sort of reward for having endured the gruesomeness that preceded it.

I’ve had to be oblique about describing the movie’s latter half because there are a few developments you might not see coming. And even if you do, Roth still manages to wring some smaller, surprising beats that make sense in context. It’s the addition of details like these that allow Hostel: Part II to rise above both the previous movie and horror sequels in general, and while Roth has probably exhausted the possibilities of this particular franchise, it’s good to see him improving on the form where other moviemakers could—and have—settled for comfortable repetition.