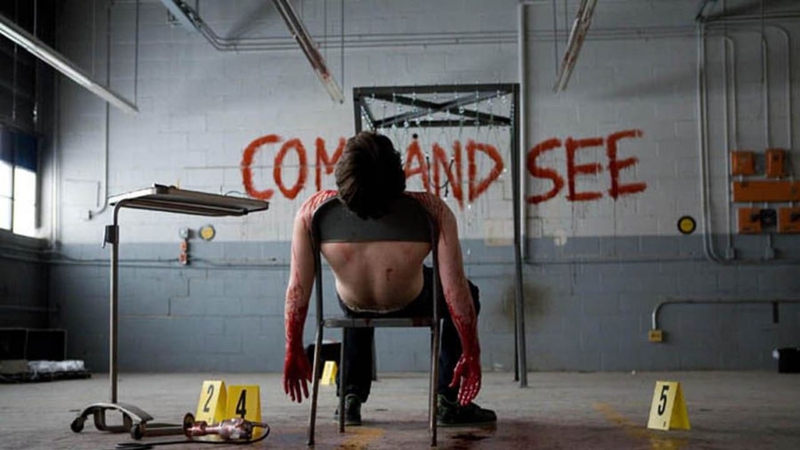 Editor's Note: This was originally published for FANGORIA on July 13, 2009, and we're proud to share it as part of The Gingold Files.

Examining the ritualistically mutilated corpse of a murder victim in Horsemen (not to be confused with the Australian revenge shocker The Horseman, and out on Lionsgate DVD), a coroner makes a point of saying this wasn’t a torture killing. The m.o. involved actually seems pretty agonizing, so perhaps the line is there in an attempt to separate Horsemen from the “torture porn” subgenre. If that’s the case, it’s surprising that when the theological inspiration for the film’s slayings is explained, along with the forthcoming number of murders the cops can expect, nobody pipes up with, “But this isn’t another Se7en knockoff.”

At least director Jonas Akerlund (like Se7en’s David Fincher, a music-video/commercials graduate) doesn’t imitate the monochrome/bleach-bypass look of so many serial thrillers from the past decade. His approach is more naturalistic in both the colors (sharply replicated in the disc’s 1.78:1 transfer) and visual storytelling, though there are the expected moments of kinetic editing. Similarly, Dave Callaham’s script makes an earnest attempt to concern itself as much with the people whose lives are affected by/tied into the slayings as with the crimes themselves. Yet their good intentions lie on this particular road to hell alongside awkward performances and an overwhelming sense of been there, seen that.

Dennis Quaid goes through the movie with a permanent scowl (except for a couple of scenes where he gets all agitated and twitchy) as Aidan Breslin, a detective specializing in “forensic odontology” who’s brought in on a case where a bunch of forcibly removed teeth have literally been left on a silver platter for the cops to find. As he investigates what becomes a series of similarly showy homicides, he also deals with the sort of troubled personal life that no screen cop is complete without. In this case, the recently widowed Aidan has been so consumed with work that he has little time for his two sons, resentful high-schooler Alex (Lou Taylor Pucci) and younger Sean (Liam James). Horsemen is the type of movie where the father and boys are seen getting all excited about attending a hockey game, and you count the seconds until his cell phone rings and he gets called away, disappointing his kids once again.

Aidan winds up spending at least as much time with Kristen (Ziyi Zhang), the adopted daughter of one of the victims. That’s because—and it’s not giving away too much to reveal this, since the movie does too fairly early on and so has some of the promo material—she’s the murderer, or at least one of them. The lawman and villain wind up having the kind of one-on-one, completely unsupervised discussions that probably only exist in the cinema, in which Kristen speaks portentously about the methods and meanings of what she and her cohorts, whose actions are informed by the biblical Four Horsemen of the Apocalypse, are up to. Zhang, so striking in the likes of Crouching Tiger, Hidden Dragon and House of Flying Daggers, is seriously miscast here; even wearing the pigtails she sports in her first scenes, the actress, who was in her late 20s during filming, doesn’t make for a convincing teenager, and her heavy accent isn’t believable either coming from a girl who’s supposedly been living with an American family since age 8. (For that matter, there’s no discernible narrative reason why this character has to be an adoptee—as she was in the script before Zhang’s casting, the DVD commentary reveals—in the first place.)

Aidan and Kristen’s tête-à-têtes alternate with the strife between Aidan and Alex, Aidan’s consultations with a priest (Paul Dooley) and the discovery of another body or two—until the movie takes an out-of-nowhere left turn to spend time with a couple of brothers who couldn’t look less alike. (Perhaps one of them was adopted too?) The movie stumbles through a few glaring lapses in logic on the way to its climactic revelation—which involves the biggest plot hole of all, one that the filmmakers try unsuccessfully to paper over.

Horsemen has the feel of a movie in which material that could have made its more befuddling plot turns go down easier has been shorn out, but the deleted scenes included on the disc don’t offer much relief. Running just over 11 minutes, they mostly retread ground and restate ideas already covered in the feature, though one does help justify the prominent opening-credits billing of Peter Stormare, who appears for only a few minutes in the movie proper as—here’s a surprise—a sleazy pervert.

The commentary, by Akerlund and director of photography Eric Broms, reveals that the postproduction tinkering went beyond scissoring this stuff out—several key moments, including a couple of the major crime-scene setpieces and the finale, underwent reshoots a year after principal photography was completed. The duo’s discussion goes silent too often, and despite Broms’ presence, the art of Horsemen’s cinematography is barely addressed. Instead, they inform us several times about how cold the shoot was, and there’s quite a bit of talk about the body-suspension techniques (involving large hooks through the skin) employed by the killers, and which Akerlund almost tried out himself. Too bad he didn’t—that would have made for an interesting photo gallery, and the ultimate example of a filmmaker suffering for his art.