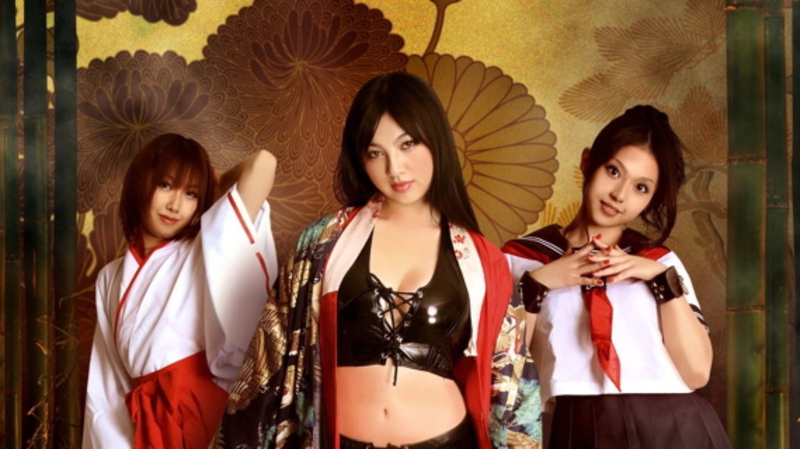 Editor's Note: This was originally published for FANGORIA on July 8, 2011, and we're proud to share it as part of The Gingold Files.

Currently playing the New York Asian Film Festival and making its Canadian premiere later this month at Montreal’s Fantasia, Horny House of Horror is kinda like The Hangover, if The Hangover was made on a much lower budget and employed vagina dentata instead of amnesia as a key plot device. Its Wolf Pack consists of party-hearty baseball buddies Toshida (Wani Kansai), Uno (Toushi Yanagi) and Nakazu (Yuya Ishikawa), the latter of whom is about to get married to a gal who insists on keeping tabs on him via cell phone. Toshida and Uno think he needs one last thrill before tying the knot, and wouldn’t you know it, they come across the Shogun Massage Parlor just as they begin strolling home from their suburban playing field one night. (The movie is nothing if not economical.)

Once Nakazu is convinced by his pals to try the place out as an impromptu bachelor party, the trio seem to be in for one hot night—no ifs or ands, just three female butts that are displayed through holes in a wall to give them a taste of what’s to, er, come. Thanks to a bloody prologue involving an earlier customer becoming a castrato, however, we already know that their wicks are destined to be stripped as well as dipped (like I said, the movie is nothing if not economical). But the guys are oblivious at first, so off they go into separate rooms with their selected ladies of the night, Nagisa (Saori Hara), Nonoko (Asami) and Kaori (Mint Suzuki). Cue ample nudity from the gals, overacted exclamations of enthusiasm from the guys and the type of firehose gore FX that have become the trademark of special FX creator Yoshihiro Nishimura.

Horny House of Horror was written and directed by Jun Tsugita, who scripted Nishimura, Noboru Iguchi and Tak Sakaguchi’s Mutant Girls Squad, and Asami is a veteran of several features by this Japanese Splat Pack. This in mind, you know exactly what to expect when you sit down to watch this movie, and Tsugita and co. bar no holds (or is it hold no bars?) giving it to you. The girls are gorgeous, spunky and aggressive, the male cast seem to be having a good time—and what straight male wouldn’t, under the circumstances?—and there’s a perverse invention to the ways in which the literal maneaters violate their clients/victims’ nether regions. Unlike some examples of this strain of film, which start with the dial set to 11 and stay there through running times that push the limits of patience, this one actually takes just a little time building to its extreme setpieces (after that prologue, of course), with that brief length ensuring it doesn’t wear out its welcome.

It also ensures that there isn’t much of a plot to be had, beyond one of the girls having a change of heart and attempting to help one of the dudes escape the charnel house. For all the boundaries of good taste it pushes, Horny House of Horror doesn’t really break any new ground in the exploitation field, and it’s not exactly possessed of the kind of subtext that can make a movie of this type resonate and endure. But as Abraham Lincoln once wrote, people who like this sort of thing will find this the sort of thing they like, and it provides exactly the type of quick, trashy diversion it promises. It’ll play especially well with a packed, rowdy festival audience—and even more so if you’re intoxicated.