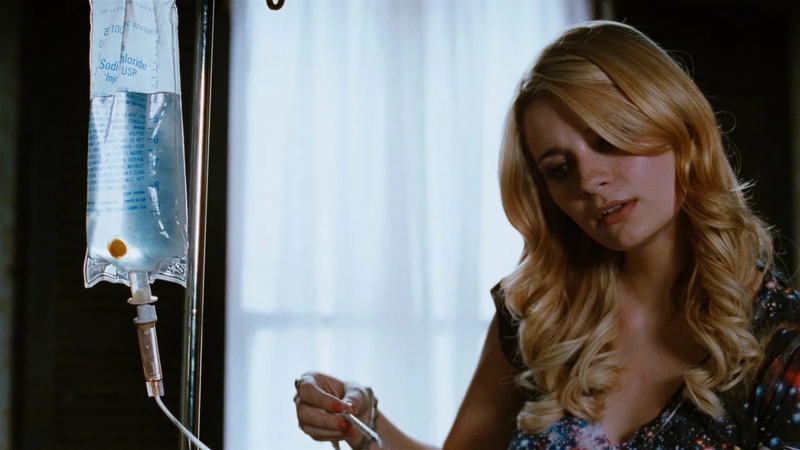 Editor's Note: This was originally published for FANGORIA on July 10, 2009, and we're proud to share it as part of The Gingold Files.

The early line on Homecoming suggested it’s yet another in the now 22-year-long string of Fatal Attraction knockoffs, with an unbalanced woman developing a deadly fixation on a spoken-for guy. But the movie proves instead to be primarily a derivative of Misery, complete with a scene of painful foot abuse.

Hopes for something a little more creative are briefly raised when the opening titles credit two writers for the “idea” and three more for the screenplay, but as the film goes on, it becomes clear that too many cooks spoiled the broth here, or at least rendered it bland. Matt Long stars as Mike, a former star high-school quarterback who returns to his small, blue-collar home town for Christmas break and a ceremony in which his jersey number is going to be retired. (I’m no football fan or expert, but does this really happen with high-school players?) He’s welcomed back as a local hero, and no one is happier to see him than his former girlfriend Shelby (Mischa Barton), who was then the homecoming queen but is now stuck running the local bowling alley. She’d love nothing more than to rekindle things with Mike, but unfortunately he has brought along Elizabeth (Jessica Stroup), his new, wealthy girlfriend whom he wants to introduce to his family.

Smiling on the outside, Shelby immediately starts scheming to undercut Mike’s new relationship, beginning by getting Elizabeth falling-down drunk before the latter can meet the parents. From there, a contrived series of events lead Elizabeth to become stranded at Shelby’s remote house, injured and bedridden, pumped full of drugs and unable to escape. With her rival for Mike’s affections safely tucked away, Shelby begins a full-court press on her former beau, exacerbated by the encouragement of Mike’s cousin Billy (Michael Landes), a local cop who doesn’t get why Mike ever dumped Shelby in the first place.

There’s not much tension to this side of the story, because it quickly becomes clear that Homecoming, like this year’s other Fatal Imitation, Beyoncé Kicks That White Bitch’s Ass (a.k.a. Obsessed), doesn’t have the guts to have its hero actually succumb to its temptress’ charms. And if it isn’t going to go there, then it’s hard to imagine anything too terrible is going to happen to Elizabeth, further undercutting the suspense. Instead, the film just clicks through the expected plot turns as if on autopilot: Mike frets about his situation while Elizabeth tries vainly to flee her captivity, discovering a few Dark Secrets about Shelby’s past along the way, and Shelby herself becomes increasingly frustrated and manic, with another body or two falling in the process.

Director Morgan J. Freeman, who previously dealt with a seriously bad girl in the even less persuasive American Psycho II, brings competence and some slick visuals (in tandem with cinematographer Stephen Kazmierski) to the proceedings, but not much else. Barton gets the surfaces but not the nuances of Shelby’s psychopathology, while Long’s flat line readings are underwhelming. Stroup fares better and engenders a certain amount of sympathy for Elizabeth’s plight, but is done no favors by a scenario that does its best to make her seem like a helpless fool. At one point, she’s locked in an upstairs room while Shelby deals with a visitor downstairs, and when the guy leaves the house, Elizabeth bangs on the window to get his attention—without parting the blinds so he can see who’s doing the banging. For this infraction, Shelby imprisons Elizabeth in a bathroom where the window is too high on the wall for her to knock on or escape through—and for any normal person to see out of.

There’s a hint of a subtext about class conflict and the travails of rural working stiffs that threatens to make things more interesting here and there, but it never breaks through—as if one of those scriptwriters introduced the idea only to be vetoed by the other two. Mostly, Homecoming goes through the motions as if expecting that only newcomers to the psychothriller genre would be watching it—topped off by a final “scare” suggesting its creators were counting on that.