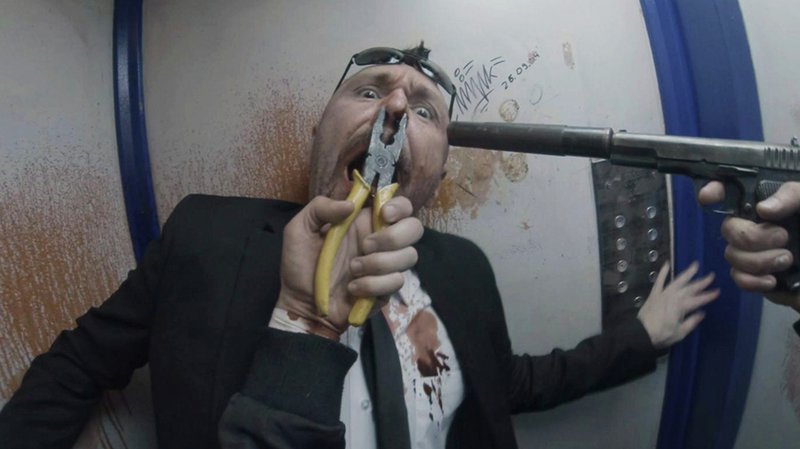 Editor's Note: This was originally published for FANGORIA on April 5, 2016, and we're proud to share it as part of The Gingold Files.

Hardcore Henry was originally called just Hardcore, the title change presumably effected lest anyone mistake it for pornography. Yet that association is entirely appropriate; the movie is a soulless, pointless glorification of the taking of human life, to the point where it makes you wonder why you ever enjoyed violent movies.

Let’s make one thing perfectly clear (as if it’s necessary given that this review is running at Fangoria.com): I have no problem categorically with movies that deal in death and bloodshed. I do have a problem, however, with a film that has absolutely nothing to offer except the death and bloodshed, and adopts a style inviting us to get off on it for its own sake, disconnected from any sense of purpose or motivation. A movie like The Raid, with which Hardcore Henry has some aesthetic kinship, may be packed full of insanely graphic carnage, but it also has a hero with a core of humanity whom we can care about, good guys he fights alongside, well-defined bad guys with their own goal and a sense of relentlessly developing narrative. Hardcore Henry features a protagonist who’s a literal blank, with no objective but destroying enemies who are nothing more than walking blood packs.

The gimmick and selling point is that director/co-writer Ilya Naishuller (whose background—surprise!—is in music videos) films everything from Henry’s constantly running, jumping and shooting point of view. Following an opening-credits sequence unpromisingly comprised of stylized, fetishized shots of people’s heads, bodies and limbs being shot, punctured and crushed, we-as-Henry wake up in a lab, watch as he is outfitted with an artificial arm and leg and are then thrust into a scenario where everyone in the world seems to want to bump him off. There’s one good surprise early on, leading to the movie’s sole visual moment of grace; all else is Henry killing, killing, killing. We are told nothing about his history, background or personality, or how he feels about anything; he pointedly doesn’t even have a voice. That could work if we saw Henry’s face, and could share his expressed emotions; instead, the only thing we’re invited to identify with is the excitement of blowing other people away, disconnected from any rationale or conscience.

Hardcore Henry represents the degradation of the modern genre film at its absolute nadir: an exercise in cold technique that’s flashy and hopped up but has no interest in actually engaging us emotionally with its action; it’s like watching someone else play a first-person shooter game for a little over 90 minutes. The few people who have any dialogue (which, when it is spoken, is wildly overacted for the most part) are avatars, not characters, and the closest the movie comes to storytelling is an occasional burst of been-there-heard-that exposition about scientifically created supersoldiers. There are, needless to say, no women of any consequence on view: The only females present are Henry’s wife Estelle (Haley Bennett), who’s supposed to be a brilliant scientist but comes off like a cheerleader in a lab coat, and whose only real function is to be kidnapped by the bad guys; a few leather-clad fightin’ babes who have only the briefest screen time; and a bunch of naked and half-naked hookers.

While its best purpose might seem to be masturbatory grist for teenage boys with extremely short attention spans, Hardcore Henry is being hailed in certain quarters as some kind of bold evolutionary next step in action cinema—and if this is the future of the genre, the movies are in serious trouble. The full-length first-person technique is certainly fraught with possibilities, but the way it’s deployed here, you get the point in the first five minutes, and after that the only interest is in how many different ways and places Henry can murder people. A literally nonstop run-and-gun flick could be exhilarating if there were any stakes at all worth caring about, which Naishuller and co. clearly weren’t interested in. Instead, the effect is exhausting, numbing and depressing to anybody who believes that while violence can be a key component of a film, it shouldn’t be the only one. Yes, it’s technically well-realized, and the filmmaking team obviously put a lot of effort into seamlessly maintaining the hurtling point-of-view illusion. Too bad they, like their protagonist, evidently never stopped for a second, to come up with a reason why the viewer should care.