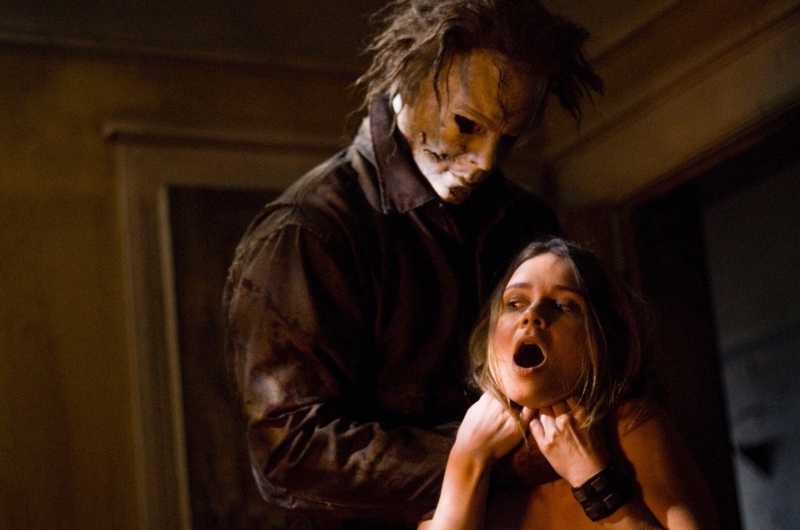 Editor's Note: This was originally published for FANGORIA on November 30, 2007, and we're proud to share it as part of The Gingold Files.

To answer the first question many will have about the DVD release of Rob Zombie’s Halloween: yes and no. Yes, the unrated edition includes many moments previously visible only in the bootlegged early cut, but no, not everything Zombie trimmed from his reimagining of John Carpenter’s landmark chiller has been reinstated into the feature itself. Thus, the deleted scenes section is more substantial than usual, running 22 minutes and featuring glimpses of cult-fave performers like Adrienne Barbeau. The first version of the sequence of Michael Myers escaping the Smith’s Grove sanitarium that Zombie shot, prefaced by the rape in Michael’s cell, appears in the movie, but the second one he filmed for the big-screen release, containing cameos by Bill Moseley and Leslie Easterbrook, isn’t among the deleted material—presumably because it’s part of the theatrical cut also being issued in an otherwise identical DVD package.

The fluid nature of Halloween’s creation is a primary theme of the discs’ extras. Zombie reveals that numerous scenes were lensed without a specific place to go in the narrative, while others were rethought and refilmed to maintain continuity as the movie was shaped (no pun intended). Rather than suggesting that the writer/director didn’t have a clear point of view on the project, it reveals him as a filmmaker willing to experiment, try out different approaches and then see what plays best in the editing room. Even when it doesn’t work, and not all of Halloween does, it’s evident that Zombie is a filmmaker with a clear creative process.

That process isn’t explored in quite as much depth here as it was in the double-disc set of his previous Devil’s Rejects, whose feature-length 30 Days in Hell documentary remains a yardstick by which all other DVD supplements can be measured. The making-of segments here add up to under an hour, and in fact the longest extra is the half-hour Casting Sessions collection of videotaped auditions. This one is actually a lot of fun, and reveals still more material that never hit the screen as young Daeg Faerch reads an unused scene involving the juvenile Michael and a young female classmate. Scout Taylor-Compton appears here (and in a separate screen test) with longer dark hair and without the glasses she wears as Laurie Strode; Danielle Harris pitches attitude in her tryout for Annie and Kristina Klebe pitches even more as Lynda; and a couple of actors read for different parts than they wound up taking in the film, like Clint Howard auditioning for the school-principal role ultimately filled by Richard Lynch.

We also Meet the Cast in a featurette in which Zombie and his performers discuss their assorted characters; some sections herein are worthwhile but others amount to little more than thumbnail sketches. The best line, which Zombie also says in his audio commentary, addresses the decision to make Laurie less of a “good girl” than Jamie Lee Curtis played in the ’78 classic: “She would have seemed like she was Amish or something.” More intriguing is The Many Masks of Michael Myers, which touches on both the killer’s characterization and the different false faces he wears. Makeup FX artist Wayne Toth’s creation of Michael’s signature white visage is detailed—for what may be the first time in Halloween history, it was molded directly to the features of the actor who wore it, in this case Tyler Mane —and we learn that the clown mask Michael sports in his early years was based on one purchased on eBay for $12.

Another notable figure—38 knives in all were used in the course of filming Michael’s mayhem—is revealed in Re-Imagining Halloween. This three-parter examines how Zombie applied his own aesthetics to Carpenter’s material as well as the makeup FX, props and production design—the latter incorporating a technical advantage Carpenter didn’t have (like the original, this Halloween was actually filmed earlier in the year, but the 2007 team could digitally manipulate the footage to make it look like fall). One interesting bit finds Zombie contemplating the issue of what makes “a Rob Zombie film,” and he’s also briefly seen scouting the bar that would become the Rabbit in Red lounge—the kind of preparatory work that distinguished 30 Days in Hell and that it would have been nice to see more of here. There are no quibbles with this disc’s Bloopers, however, just a lot of laughs as Malcolm McDowell makes fun of Udo Kier, cuts up with Brad Dourif and generally suggests that if the Scary Movie team ever spoof this Halloween, they’d do well to recast McDowell as a comedic Dr. Loomis.

Zombie himself has some amusing things to say on his commentary, as when he notes that Ken Foree “is an amazing actor, but he’s the worst dead body ever”; the filmmaker had to digitally cover up Foree’s breathing and blinking when he was supposed to be playing a corpse! For the most part, however, this is a straightforward and very thorough chronicle of the shooting (and reshooting) of Halloween, chock full of entertaining trivia (Forsythe actually hurt his leg just prior to filming, which is why his character is chairbound for his entire screen time) and discussion of the improvisational approach Zombie encouraged between McDowell and Faerch and that he himself sometimes applied to the production (like using a hose to simulate a downpour when no rain towers were available), as well as how he created and adapted different scenes to fit the story’s shifting timeline. Others on the disc talk about how they helped achieve Zombie’s vision, and in the commentary and elsewhere, he reveals that he’s one of the few recent horror-remake directors who actually had one.