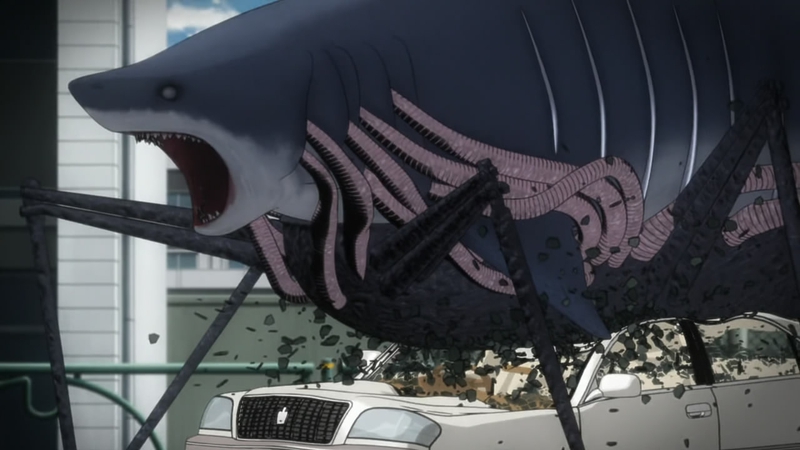 Editor's Note: This was originally published for FANGORIA on July 20, 2012, and we're proud to share it as part of The Gingold Files.

If you’ve read the manga by Uzumaki and Tomie’s Junji Ito that Gyo is based on, it’s extra fun to see the movie with friends and/or a big audience unsuspecting of the batshit-crazy experience they’re about to have. If you haven’t, well…prepare for a truly bizarre ride.

Newbies to the tale may have a better time, in fact, as Gyo the OVA movie (making its Canadian premiere at Montreal’s Fantasia fest after playing the New York Asian Film Festival) has been notably condensed and altered from Ito’s graphic-novel original. The premise is the same, and the leads are still young couple Tadashi and Kaori, but here Kaori is the protagonist, first seen on vacation in Okinawa with her two friends, slutty Erika and plainer, resentful Aki. The house they’re staying in is permeated with a foul odor, but that doesn’t stop Erika from inviting over a couple of horndog guys for some sexual shenanigans—which are fated to be interrupted by the horrors that will soon befall them.

Yes, Ito’s complex narrative has been devolved down to a scenario resembling a Friday the 13th sequel. The difference is that none of those films—or any American youth-horrors—have pitted their characters against an invasion of ocean life that has mysteriously sprouted insect-like legs and begins overrunning the land. As the citizens of Japan dodge millions of scuttling fish, Kaori and co. come under attack by a vicious, hungry and newly ambulatory great white shark that crawls and chomps its way through the house, attempting to eat them. And if the idea of a great white shark with legs doesn’t make your inner 10-year-old cry tears of joy—well, you’re just not a genre fan.

There’s quite a bit more to the story (if quite a bit less than in the manga), as Kaori attempts to make her way to Tokyo to find Tadashi, hooking up (in the nonsexual sense) with a reporter named Shirakawa on the way. But not many more details of the sheer weirdness that ensues should be revealed here; suffice to say that it incorporates all kinds of body horror, gross transformations and fluids and creatures of many different species, including a giant octopus that indulges in the kind of tentacle assault that no horror anime is complete without (albeit in a nonsexual sense, again). The screenplay by director Takayuki Hirao, whose credits include episodes of the late, great Satoshi Kon’s Paranoia Agent series, is simplistic A-to-B-to-C stuff, the action only occasionally interrupted by stabs at personal drama and thematic statements, as when Shirakawa muses on journalistic responsibility and the nature of truth.

Whatever. The true point of Gyo is to present a scenario in which a carnival big top can appear in the middle of an urban crossroads, the ringmaster inside delivering exposition while the mutant humans he presides over play musical instruments, and it makes no less sense than anything else that transpires. It all moves swiftly enough (clocking in at 70 minutes) to forestall any concerns about narrative and character depth or lack thereof; you just sit back and let the whole nutty yarn wash over you. Gyo may be reductive in its screen translation of Ito, but given the uneven-at-best track record of past live-action adaptations (Uzumaki worked, but amidst the endless lackluster Tomie movies, Noboru Iguchi’s Tomie Unlimited was an exception that proved the rule), it demonstrates that animation, which here is of typical OVA standards, may be the best form with which to bring his deranged visions to the screen.