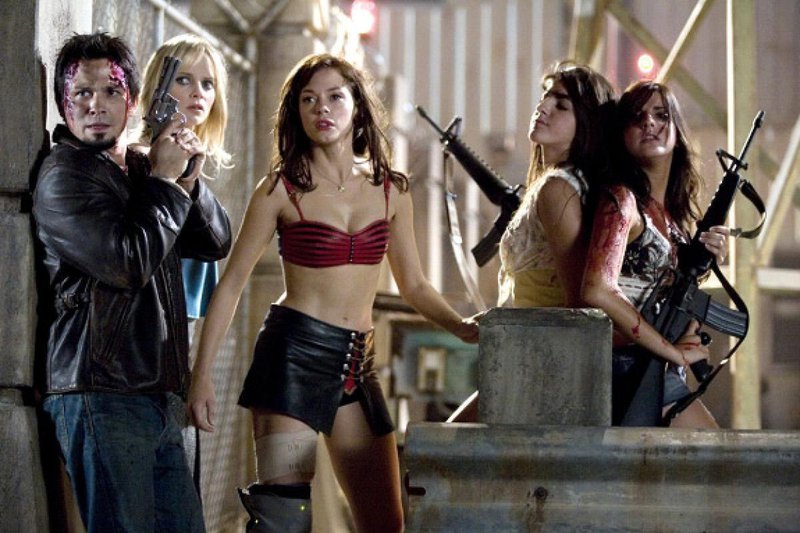 Editor's Note: This was originally published for FANGORIA on April 6, 2007, and we're proud to share it as part of The Gingold Files.

In the Robert Rodriguez-scripted/directed first of its two conjoined movies, Grindhouse is the ultimate sugar rush for horror fans, a high-calorie, low-nutrition blast of cheap thrills wrought on a big budget. In the second, Quentin Tarantino upends the framework and traditions of exploitation fare to craft a film that’s just as much a showcase for his gift of (writing) gab as it is for action. And in both Rodriguez’s Planet Terror and Tarantino’s Death Proof, a love and respect shines through for the B-movie tradition that too many others “homage” with snarky irony. The wholeheartedness with which they express their devotion to the form almost amounts to a kind of innocence, and for all the explicit mayhem on screen, there’s little of the seediness and seaminess one associates with the word “grindhouse” or the movies one might have seen there back in such theaters’ heyday. Had it not already been used on a couple of other films already, Drive-In might have been an even more appropriate title.

Each filmmaker has chosen a different decade from which to draw his inspiration, and Planet Terror bursts off the screen with the gushes of gore that defined early-’80s horror fare, when the talents of Tom Savini et al. first allowed the most grotesque sights to be realized with a vivid new realism. (And of course, Savini is rewarded for his legacy with an onscreen role.) The movie serves as a great big playground for the KNB EFX team, who probably sling more blood, pus and other unpleasant bodily fluids here than they have in their last 20 movies combined, as the release of a military biological agent causes anyone it taints to become a pustulant, bloodthirsty killer.

Rodriguez would rather the infected folks be referred to as “sickos” than zombies, though the oeuvre of George A. Romero reverberates throughout Planet Terror. An even stronger thematic influence is the cinema of mid-career John Carpenter, echoed in the multiple siege setpieces, paranoia/distrust-of-authority themes and in the director’s own perfectly homagistic score (with a piece of authentic Carpenter music from Escape from New York placed under a key scene as well). Yet the playful excess on view throughout is pure Rodriguez, as he delights in pushing the envelope and fills the story to bursting with eccentric characters who all have minidramas to play out against the backdrop of the “sicko” invasion.

The cast playing the assorted survivors and victims is a crazy quilt of genre veterans, up-and-comers and B-listers, with Freddy Rodriguez as the hero who becomes the love interest of stripper Rose McGowan and has a running conflict with Michael Biehn whose deputy is played by Savini and whose brother Jeff Fahey runs the local barbecue joint where some of the uninfected take refuge after the sickos invade the local hospital where doctor Josh Brolin (looking more like his dad James than ever) has an extremely contentious relationship with his wife and fellow medico Marley Shelton whose dad is played by Michael Parks (reprising his Earl McGraw character from Kill Bill and From Dusk Till Dawn) while her young son is in the care of “the Crazy Babysitter Twins,” played by Rodriguez’s nieces Elisa and Electra Avellán. Somehow, in the midst of all this, there’s also room for appearances by such diverse faces as Bruce Willis, Lost’s Naveen Andrews and Stacy Ferguson, a.k.a. “Fergie” from the Black Eyed Peas.

With all these interpersonal relationships, endless flesh-rippings, shootings and splatterings and a number of clever details and payoffs going on, Rodriguez successfully keeps all the balls in the air—aside from the pair belonging to a supporting character that grotesquely melt and drop off on screen. Rodriguez so gleefully casts aside any regard for his characters’ bodily safety that it’s entirely fitting that he has artificially distressed the image with “dirt,” “scratches” and “missing frames,” so that it looks like the print is coming to the end of a very long and uncared-for tour of the nation’s lower-rent theaters. There’s an irony in the fact that Rodriguez clearly spent a great deal of money staging his sicko apocalypse and then spent more to make Planet Terror resemble a damaged cheapie, yet everything about it feels of a piece. He even manages to incorporate a fun “Missing Reel” gag in such a way that it does feel like key scenes are absent, but no understanding of the plot is lost.

Tarantino pulls the same trick in Death Proof, but the resemblance between the films ends there. While he makes the early sections of his movie appear battered in the same manner as Rodriguez (incorporating a great visual joke involving the title), Tarantino gradually eases out of this approach before the halfway point, presenting the last 45 minutes or so largely clean and intact. And that fits, because the focus of a good deal of Death Proof is not action, but talk, and he doesn’t want any distractions. His focus on dialogue over destruction results in a pace that might strike some as too leisurely coming after the sound and fury of Planet Terror, and reminiscent of the sort of drive-in flicks that gave viewers plenty of time to repair to the back seat. But the scripters of those movies, by and large, didn’t have Tarantino’s talent for writing colorful, endlessly listenable lines, and the fact that he has applied his skill almost entirely to girl talk for the first time makes Death Proof, among other things, a quiet subversion of a genre not generally known for its feminist bent.

Tarantino has described Death Proof as his version of a slasher movie, but it only stands as such in the very general sense that it’s about a psycho who likes to kill women. Since the weapon of choice for Stuntman Mike (Kurt Russell, effectively cast in a rare evil role) is a customized muscle car rather than a knife or a chainsaw, however, the film owes much more to such ’70s asphalt actioners—duly referenced by the film’s characters—as Vanishing Point, Dirty Mary, Crazy Larry and Gone in 60 Seconds—“the original,” as one of his heroines clarifies. Here and at a few other points, Tarantino spits in the eye of the current trend toward overblown, CGI-enhanced chase-and-crash setpieces, before he winds up with a lengthy pursuit sequence which proves you can outdo them all for thrills and excitement with the simple ingredients of two automobiles, a long stretch of road and a stunt team who know what they’re doing.

Another way in which Death Proof deviates from the stalker-film norm is by giving its women personality and spunk—all of them, not just a “final girl” destined to survive while the sexbombs and airheads die around her. In addition, Tarantino eschews gratuitous nudity (though as usual, he fetishizes the girls’ feet to the nth degree) and trusts that we’ll be engaged simply by listening to them converse about life, their careers and yes, sex—and he’s right, in part because he proves here that he can capture feminine jargon as well he does tough-guy epithets, and in part because he’s selected a terrific ensemble of performers. It doesn’t seem fair to single anyone out from the group, but the screen is especially commanded by Rent’s Tracie Thoms, who leaps off the screen with her bad-ass attitude, and Zoë Bell, the New Zealand-born stuntwoman who doubled Uma Thurman in Kill Bill and is cast here as herself. Not only does she prove to be natural actress, but in the final reels she’s the center of one of the most hair-raising stunt sequences ever committed to film. If anyone is going to come out of this Tarantino project a newly minted star, it’s her.

Oh, and the faux trailers—by Rodriguez, Rob Zombie, Eli Roth (who also has an amusing onscreen role in Death Proof) and Shaun of the Dead’s Edgar Wright—that precede and separate the features are a hoot, and make the whole retro experience complete. In particular, the clips by Roth (who makes very funny use of a Creepshow soundtrack cue) and Wright are hilariously dead-on in emulating the hard sells once used to promote ’80s slasher cinema and ’70s British Gothic. I’d love to see them serve as the basis for a pair of full-length films in a Grindhouse sequel.