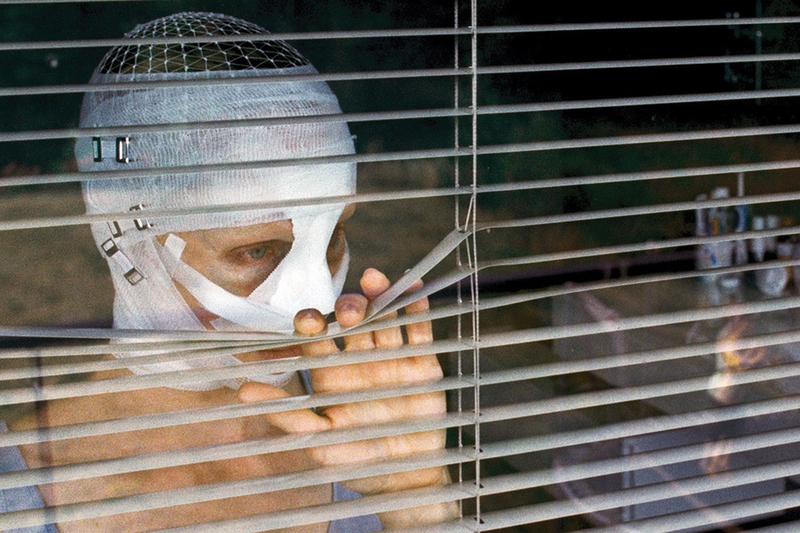 Editor's Note: This was originally published for FANGORIA on July 20, 2015, and we're proud to share it as part of The Gingold Files.

When we first meet identical young brothers Elias and Lukas in Goodnight Mommy, one boy’s shirt is of a slightly darker shade than the other’s, but this is no typical good twin/bad twin story.

In Goodnight Mommy (making its Quebec premiere at Montreal’s Fantasia festival, and opening theatrically from Radius-TWC in the fall), Elias and Lukas live in stark rural isolation somewhere in the Austrian countryside. Lately, they’ve been left to their own devices; their father is MIA and their mother (Susanne Wuest) has been away at hospital. Elias seems to be the somewhat more dominant of the two, but they share a close bond as they play and explore outdoors, at one point entering an ominous cave presaging a more threatening tone for things to come.

Sure enough, the situation at home becomes harsher once their mother arrives home, her face swathed in bandages that make her appear like an alien being. Her behavior has changed as well; she has become cold and severe, enforcing strict rules in the interest of her own recovery and showing what little favor she gives to Lukas over Elias. Through games, clues and discoveries, Elias and Lukas begin to suspect that the woman living with them is not their mother, and to fear for what she has in store for them, and what she might have done to their real mom.

From there, the story takes a turn that won’t be revealed for those not already aware of it, as the relationship between the woman and children devolves from psychologically to physically abusive. Writers and debuting feature directors Veronika Franz (who has co-scripted several films with Mommy producer/art-house maverick Ulrich Seidl) and Severin Fiala demonstrate a remarkable amount of control for first-timers, establishing a chilly, unbroken sense of foreboding early on and inexorably tightening the screws as the movie becomes a more visceral experience. There are scenes in the grueling third act that are hard to watch, yet the film remains rooted in such relatable psychological territory—what child hasn’t thought, at some point or other, that a mother or father isn’t her- or himself?—that it doesn’t become a simple freakshow.

As things go from bad to worse inside the house (which, despite the provincial setting, is sleekly, chillingly modern and spare), the filmmakers adroitly manipulate our sympathies among the minimal number of characters. Wuest impressively embodies a real-world variation on the fairy-tale wicked stepmother, while the Schwarz twins, newcomers to the acting game, feel completely real as their onscreen alter egos are taken into seriously dark territory. The film hinges on the audience believing their reactions to their mommy’s new, monstrous demeanor, and the Schwarzes engage us though to the final act, when a game-hanger of a plot turn is sprung.

That revelation is one that many viewers might see coming; some will pick up on clues sprinkled throughout the early going, while others might recall the same gambit being employed in a similarly themed ’70s film. This familiarity or predictability shouldn’t breed contempt, though, as Goodnight Mommy tells its specific story and gets under the skin (literally, in a few painful moments) of its individual characters in ways that will have you shuddering, and establish the filmmakers as a pair to keep an eye on.