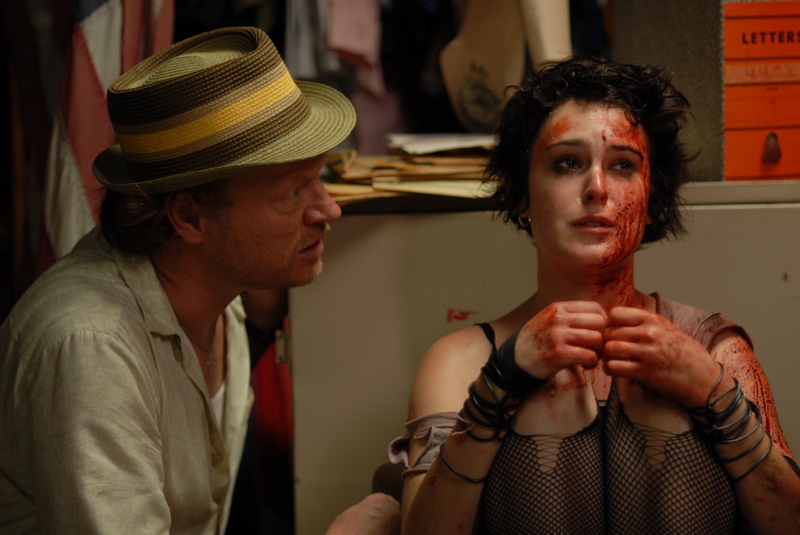 Editor's Note: This was originally published for FANGORIA on April 26, 2008, and we're proud to share it as part of The Gingold Files.

Although it deals with the hot-button topics of religion and suicide, there’s never a sense that From Within is aiming for gratuitous provocation, or wearing its issues on its sleeves. Currently playing New York City’s Tribeca Film Festival, it’s a straightforward, back-to-basics horror drama that looks great—not surprising given that it was directed by the gifted cinematographer Phedon Papamichael. Yet he doesn’t let the imagery overwhelm the movie either, employing an eye-catching naturalistic palette that gracefully segues into menacing mood. Papamichael stated at the film’s Tribeca premiere that horror isn’t necessarily his thing, but he proves here that he sure can direct the heck out of a scare setpiece.

Indeed, the movie starts off with a literal bang, as a young man shoots himself on the outskirts of the village of Grovetown, and the Gothed-out Natalie (Rumer Willis, daughter of you-know-who, in a brief but vivid turn), who was with him at that moment, runs through the streets and into her father’s store, covered in blood. Witnessing her entrance is high-schooler Lindsay (Elizabeth Rice), who’s dating Dylan (Kelly Blatz), the son of the local pastor Joe (Steven Culp). We quickly learn that faith plays a large part in the lives of Grovetown’s residents, who go to worship at a mega-church where Joe’s image is projected on a huge screen above his stage, and it gets rocked hard as more suicides follow.

The deaths seem inexplicable, but fortunately there’s a handy scapegoat on hand: Aidan (Thomas Dekker of The Sarah Connor Chronicles), whose brother ate the bullet in that opening scene. The siblings are newly arrived back in town, having fled years before after their mother, believed responsible for the death of a local man and to be practicing witchcraft, died in a suspicious fire. Now Aidan falls under suspicion of bringing the devil’s work back to Grovetown, though as he points out, “You can’t worship what you don’t believe in,” and he’s soon befriended by Lindsay, who’s been chafing at home under the oppression of her alcoholic stepmother Trish (Laura Allen). She eventually discovers what the audience has already learned: Those poor souls are being driven to off themselves by a parasitic evil energy that leaps from each successive body to the nearest living host.

The specific nature of the victims’ terrorization is a neat visual conceit in Brad (The Gravedancers) Keene’s script, and while this gambit could have become repetitive, the writer and Papamichael keep the death setpieces varied and often jolting. With inventive staging, a few splashes of blood and a refreshing lack of CGI, Papamichael makes the supernatural presence palpable while keeping the terror personal. Also noteworthy is the way the film eschews positing religion itself as a negative force—Joe, the town’s spiritual leader, is not a frothing zealot but a concerned figurative and literal father—instead emphasizing the way certain people pervert the faith into an excuse for their own destructive impulses. (“On the Sixth Day, God Created the Bolt-Action Rifle” reads a bumper sticker seen in a telling throwaway shot.)

Through it all, Rice is a most appealing heroine, heading a young cast who all inhabit their roles with grace—and, in a switch from many such movies, actually look like teenagers. Adding flavor to the mix are Jared Harris as Natalie’s dad, Margo Harshman as Aidan’s cynical sister (providing dashes of sarcastic black humor) and Adam Goldberg, first amusingly and later creepily cast against type as a white-trash stud. Unsurpisingly for a film directed by a DP, the visual qualities, including Rafael E. Sanchez’s lensing and Susan Kessel’s production design, are topnotch, with eerie musical backing by composer Jason Cooper.

Perhaps inevitably, From Within loses a bit of its horrific charge once all its secrets have been revealed and the narrative comes down to the two young heroes racing against time and armed enemies to dispel the malevolence. Still, the climactic action is as confidently mounted as what has come before, and the movie doesn’t betray its dread-suffused tone for the sake of an easy resolution. Contrary to what a certain studio-division head has stated, From Within proves that youth-centric horror is best served when pitched with a grown-up frame of mind.