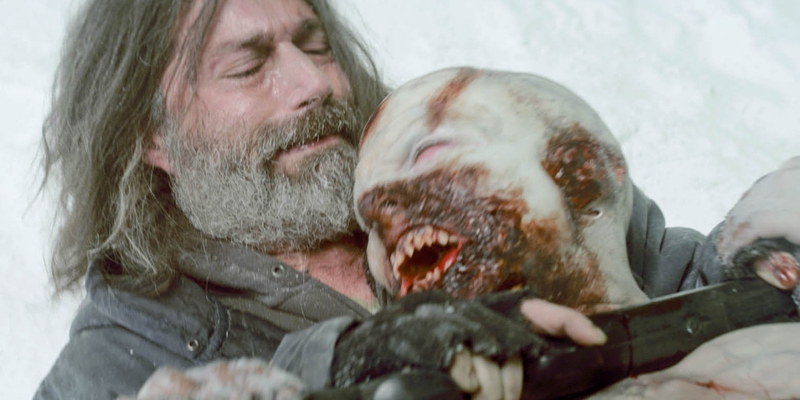 Editor's Note: This was originally published for FANGORIA on July 20, 2015, and we're proud to share it as part of The Gingold Files.

As movies about flesh-hungry ghouls have overwhelmed the horror scene to the same extent their infected hordes infest the Earth, it’s refreshing when the occasional film puts the people at a premium.

Such a movie is Extinction (a world premiere at the Fantasia festival, and set for commercial release by Vertical Entertainment), which sounded from its initial synopsis like just another handful-of-survivors-laid-siege-by-zombies flick. Hope sprang, however, from the presence at the helm of Miguel Ángel Vivas, the Spanish filmmaker who murdered our nerves with his home-invasion shocker Kidnapped, and that his partner on the script was Alberto Marini, whose credits include the Jaume Balagueró creepfests Sleep Tight and 6 Films to Keep You Awake: To Let. The duo based their script on the novel Y Pese a Todo… by Juan de Dios Garduño, which begins with a specific political conflict leading to WWIII, but the film eschews any backstory into the source of its apocalypse. It plunges us directly into its personal situation: A military convoy attempting to bus the uninfected to safety is attacked by the slavering killers, with only a few survivors.

Cut to nine years later, and the movie reintroduces us to our two heroes, Patrick (Matthew Fox) and Jack (Jeffrey Donovan), living as best they can in a snowy wasteland. (Whether the country has been plunged into perpetual winter or we’re catching them during blizzard season is also not specified.) Though they’ve made two neighboring houses their homes, their relationship is equally frosty, each fenced and barricaded in and only individually foraging for food. Patrick, sporting mountain-man hair and beard and assisted by his trusty dog, will shoot the occasional horse or rabbit he finds, while Jack, who looks rather well-groomed under the circumstances, seeks out canned goods for himself and his preteen daughter Lu (Quinn McColgan).

Their respective modes of coping with their bleak situation form the backbone of the drama for a good portion of Extinction’s running time, as Jack attempts to be a father, teacher and protector for Lu while Patrick busies himself hosting self-styled radio music shows in between broadcasting calls for help, and perhaps going just a little bit crazy. It might be better for all three of them if they could get along and deal with their plight together, but Jack has a longstanding grudge against Patrick that leads him to keep both himself and Lu at a distance. The source of that ill will is eventually revealed via flashbacks, and the movie might have been even stronger if at least part of it had been disclosed at the outset, allowing us to better understand that tension.

Nonetheless, Vivas wrangles the drama into a quietly gripping survival saga, he and his leads fleshing out the trio of protagonists to empathetic effect. Fox and Donovan enact a pair of conflicted (in both sense of the word) men struggling with past and present traumas, and McColgan is terrific, keeping precocity in check as Lu pines to experience the world outside the four walls within which she’s been cooped up her whole life. Juan Pedro De Gaspar and Miguel Riesco’s detailed production design is a major asset, creating a palpable lived-in reality within the houses (and offsetting the occasional CG artifice of the exteriors).

So what about the zombies? They’re out there, and Vivas teases us with the possibility of their threat before a sole forager shows up to lurk around the area and put the lie to Jack’s promises to Lu that the monsters are all gone. This is an advanced strain of semihuman predator, with one sense enhanced and another gone and a fairly unique look wrought by prosthetic FX supervisor Arturo Balceiro (a member of the DDT team on Pan’s Labyrinth, Dagon and others); Vivas wrings a few solid shocks from this solo attacker. Eventually, of course, the ghouls arrive en masse, jumpstarting a final act packed with exciting, impactful action, hero moments for the protagonists—at least one of which had the Fantasia crowd cheering—and some imaginative camerawork.

Although its tone and texture couldn’t be more different, Extinction joins Jeremy Gardner’s The Battery as a zombie movie whose creators have recognized that the subgenre’s tropes have been played out, and aimed for something a little different. While providing enough mayhem to keep hardcore fans happy by the end of the running time, Vivas and co. offer plenty to hold the attention when the focus is simply on its ordinary people striving to make the best of their extraordinary situation.