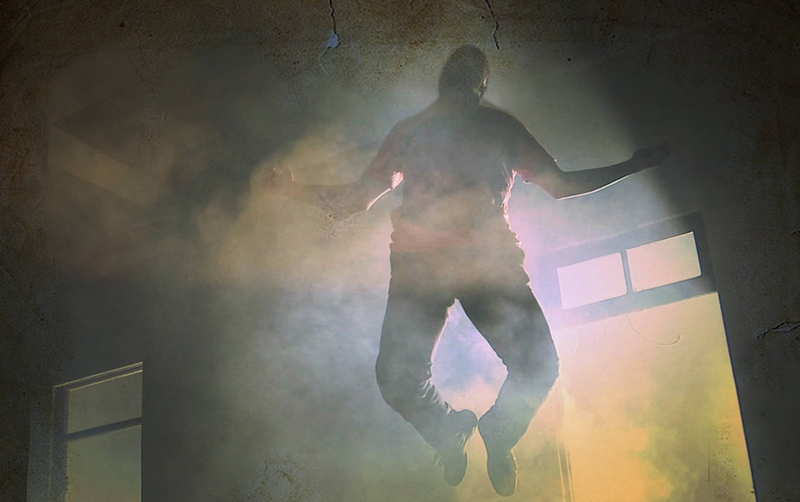 Editor's Note: This was originally published for FANGORIA on July 29, 2011, and we're proud to share it as part of The Gingold Files.

It’s a funny thing about the found-footage horror subgenre: Even though its general tropes would seem to have passed into banal familiarity by now, the immediacy of the mock-doc approach still manages to make most of them at least moderately compelling. It also helps at this point if the filmmakers bring some self-mocking humor to the proceedings, as is the case with El Sanatorio, the first horror film of any kind from Costa Rica.

Recently showcased at Montreal’s Fantasia festival, El Sanatorio is the second feature by musician-turned-filmmaker Miguel Alejandro Gómez, who winks at his chosen format just enough to disarm us into involvement with his familiar story before plunging into the scary stuff. Our intrepid heroes are young filmmaker Luis (Luis Bogartes) and journalist Arturo (Pablo Masis), who set out to take their documentary cameras into El Sanatorio Duran, a real-life abandoned facility that once served as a TB ward and an orphanage, among other things. Assorted malevolent spirits, most notably a ghostly nun, are said to haunt the place, and Luis and Arturo assemble a fairly large crew (safety in numbers?) to accompany them inside.

Some of the comedy comes from the skepticism that certain members of the team, especially atheist Kurt (Kurt Dyer), demonstrate toward the very legends they’re ostensibly setting out to document. Then there are the fun character details, like the fact that the expedition’s medium, Lulu (Marisa Luisa Garita), runs a party business on the side (a clown stops by for directions to his next gig during a visit to her place). And the producer financing the project, Esteban (Olger Gonzalez), is a control-freak a-hole through whom Gómez, a grassroots moviemaker making a movie about grassroots moviemakers, pokes fun at the money = power attitude.

He’s also got a fine location to play with; El Sanatorio Duran is chockablock with eerie hallways and shadowy rooms with boarded-up windows in which any number of spooky beings could be hiding. For all the fun he has during the lengthy setup, Gómez (who scripted with Antonio Chamu) plays the place’s potential to house evil straight, and in fact bad stuff starts happening before they’ve even set up inside, the handheld camera catching one unfortunate incident in the background while someone else is talking front and center. Then they go in and set up more cameras, which soon begin capturing objects moving on their own, and…

What happens next, and indeed the way events transpire throughout El Sanatorio, won’t surprise anyone who’s seen one or more vérité spookfests like this one previously. The trick is that Gómez, through both the comic elements and the naturalistic playing of the characters—not to mention the fact that their skepticism about whether there’s anything to El Sanatorio Duran’s rep could be seen as a mirror of our own about heading down this path again—gets us engaged enough with his protagonists that we become nervous alongside them once it becomes clear that the place is indeed haunted. After that, there’s none of the dithering around that has threatened the plausibility of this type of story in past films; the threats pile on thick and fast, giving the team little time to debate their next move or escape, and showcasing special FX supervised by Roy Rodríguez that are quite effective, especially for the budget.

The movie’s final act hurtles along to the point where it raised a number of yelps from the Fantasia audience, and climaxes with a final fright that approaches a [REC] level of heebie-jeebies. Gómez and editor Daniel Aya bring the whole thing in at a tight 73 minutes, which may be pretty short for a feature but is just the right length for the story they’re telling. A hit on its home turf last October, El Sanatorio is good enough to haunt theaters in territories where it won’t be such a novelty, but where viewers who venture to check it out will find it delivers laughs and scares in equal measure.