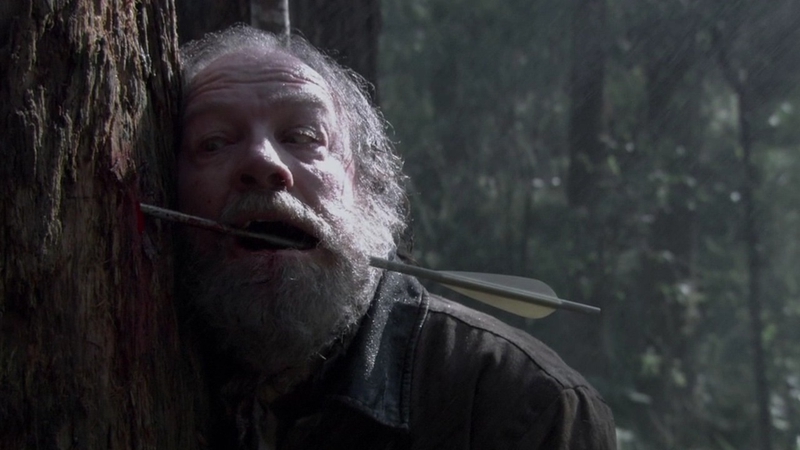 Editor's Note: This was originally published for FANGORIA on May 1, 2008, and we're proud to share it as part of The Gingold Files.

The Australian production Dying Breed (currently playing at New York City’s Tribeca Film Festival) proves that the survival-in-the-woods strain of horror film is anything but. The tried-and-true ingredients are present and accounted for: two young couples, a forbidding wilderness for them to venture into, weird and foreboding supporting characters, cannibalistic killers and plenty of graphic mayhem. And a little bit of based-on-reality garnish always adds an extra frisson, so the movie begins with a flashback involving the notorious Alexander Pearce, a.k.a. “The Pieman.” Back in the 19th century, when Australia served as a penal colony, Pearce escaped imprisonment on the island state of Tasmania and survived by consuming the flesh of his fellow escapees. He was recaptured and hanged for that offense…but could his bloodline have survived into the present day?

That’s not the question zoology student Nina (Mirrah Foulkes) is seeking to answer when she heads into Tasmania’s forests. She’s on the trail of the Tasmanian Tiger, an ages-old species commonly believed extinct, but one that she believes still survives, thanks to evidence collected by Nina’s sister eight years before—shortly before she drowned in the area. Determined to continue her sibling’s work, Nina sets out with her boyfriend Matt (Saw’s Leigh Whannell), his buddy Jack (Nathan Phillips from Wolf Creek) and Jack’s new squeeze Rebecca (Melanie Vallejo). While crossing the “Pieman River” in a creaky old boat, the group encounters the operator’s odd young daughter, who recites a gruesome variation on the old rhyme about Simple Simon and the pieman, and soon they find themselves in a small, ramshackle settlement whose twisted inhabitants are from, as Jack observes, “the shallow end of the gene pool.”

Anyone familiar with modern horror trends would take these encounters as signs that they should hightail it back to civilization, or at least return with a heavily armed escort. Instead, they forge ahead into the trees and…but anyone familiar with Deliverance, The Hills Have Eyes and their ilk will know what’s coming next. Despite having three screenwriters (director Jody Dwyer and producers Michael Boughen and Rod Morris), Dying Breed doesn’t have many fresh twists to add to the by-now well-worn path blazed by the aforementioned John Boorman and Wes Craven films. There are moments during the foursome’s visit to the Inbred Inn which suggest potential complexities and conflicts among its dwellers, but they aren’t built upon to any significant degree, and the antagonists’ appearances and actions are too familiar to carry much shock value, the occasional startling gore gag (created by Storm Warning’s Justin Dix and his team) notwithstanding.

The imposing locations (in both Tasmania and Melbourne) and their eerie lensing by cinematographer Geoffrey Hall (Chopper) do provide the proper atmosphere, and Dying Breed might still have provided a suspenseful experience were its imperiled characters truly worth caring about. Whannell and newcomer Foulkes are likable enough, but Phillips’ Jack is a giant jerk who’s so boorish and obnoxious that one wonders why anyone would travel anywhere with him, especially after he inevitably antagonizes the locals. Once they enter the jungle, despite their already unnerving encounters—and their knowledge of Pearce’s history—the group seems oblivious to the threat they’re facing, and about how to properly deal with it—not once but three times does someone say “Stay here” before running off and leaving one of their friends alone and unprotected. They’re also ridiculously trusting when some of the townsfolk just happen to show up in the middle of the woods, ostensibly offering help. The end credits tell us that hundreds of hikers have disappeared in the wilds of Tasmania since Pearce’s day, and if they were all as clueless as this bunch, that’s not surprising.

Dywer, a feature first-timer, marshals the evocative settings and generates a good pace to the point where Dying Breed doesn’t get too bogged down in its implausibilities, but it never generates the sweaty tension one craves from this kind of lost-among-madmen scenario. And the Pearce backstory isn’t sufficiently exploited to serve as anything beyond window dressing for the prosaic ingredients. Same goes for the MacGuffin of the Tasmanian Tiger, which doesn’t have much impact on the story either. Dwyer and co. appear to intend this species as a parallel to the Pieman’s lineage—two rare breeds that have survived through the ages—and the film’s final shot attempts to build irony into the comparison. Instead, the hunt for the Tiger turns out to be little more than a shaggy-dog story.